Some people are worried that this nine-year bull run is getting long in the tooth.

But what if I told you it’s about to get better? And that the next two years will be the best of all?

That’s because we’re entering the “melt-up” phase of the bull market.

Near the end of almost every bull market, people who didn’t get in early realize they’re missing out on big money. So, they start jumping in… That pushes prices up quickly… And the market accelerates. We call this a “melt-up.”

And as history has shown us, the end of the bull has some of the quickest price gains (see the chart below). 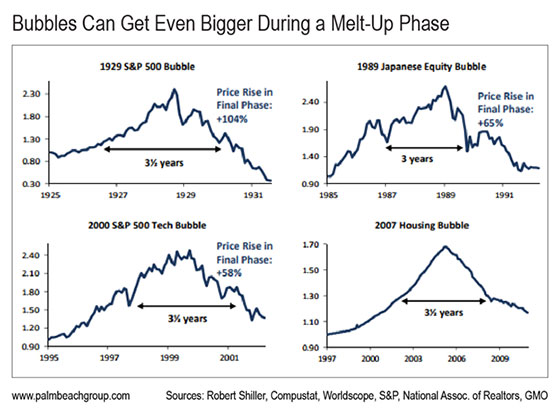 I could show you hundreds of charts like these.

But these four show the biggest bubbles of the past century. That’s why Jeremy Grantham shared them with his readers in his January 3 market review.

Grantham’s market reviews are on the must-read list in the Palm Beach Research Group offices. He’s among the best market forecasters out there.

Grantham is most famous for predicting the 2000 and 2008 stock market downturns. But he’s also predicted when to hold stocks, too.

In his February 19, 2009 alert, he told investors he was “bullish again.” That was less than one month before the market bottomed. And he’s encouraged people to hold on ever since.

If you followed his advice, you’d be up almost 300% today.

That’s why you should take Grantham’s latest review seriously. In it, he predicts the market is entering another melt-up phase.

And if you stay invested as I’ve been telling you for the past year, you could see over 50% gains as the bull market enters its final years.

Grantham is known as a value investor. That means he’s looking for stocks that are cheap.

But no matter how you value it, the market is at or near all-time highs.

So how does Grantham justify predicting a higher market? He’s a student of history.

If you look at past bubbles, you’ll see massive euphoria in the final stretches of those bull runs. Just like we’ve shown you above.

Here’s the thing… Grantham says we haven’t seen that kind of euphoria yet.

In 2017, market prices rose steadily. According to Grantham, it didn’t show the telltale signs of euphoria. But 2018 started with a bang.

And if this is the final stretch, Grantham expects the market to rise 50% or more over the next two years.

These Sectors Will Benefit Most From the Melt-Up

As I’ve urged you for months now, stay invested in the market. That’s because “we’re going to keep riding the trend until the end.”

As for where to be invested, I’d recommend the following sectors (which I wrote about in Wednesday’s Daily):

Traditionally, these sectors do very well at the end of an economic cycle. And if Grantham is right (which I think he is), we’ve got a couple years to enjoy some big gains.

Plenty of reader feedback about Teeka Tiwari’s essay on when to sell during crypto mania (January 9 Daily: “Here’s How We Sell for Profit During Crypto Mania”)…

From Olivier and Benoit D.: Dear Big T, after reading your article, we would like to thank you for the amazing last two months. Our family wishes you, your family, and your entire team a happy 2018.

Many thanks from Belgium.

From Ramona B.: You’re doing a great job with the newsletter. I rely 100% on your recommendations. Very successful. Keep up the great service.

From David K.: Hi Teeka, I first want to thank you for the way you have presented, explained, and coached me (and all your other subscribers) regarding crypto investing. I started with your service last fall and my initial stake of $16,000 just hit $99,000 this morning.

Your balanced approach of position-sizing and putting tiny amounts in several positions has been masterful at reducing my crypto portfolio volatility. You’ve already exceeded my wildest expectations and we are just getting started.

From Phil S.: Just a note for selling such a large portion of our cryptos. The IRS will want cash… so at some point, you’ll need to convert some of those profits into cash to pay your 2019 tax bill. (I’m self-reporting, of course, to the IRS.)

From Senta B.: Teeka, I wanted to thank you back in December when you said you had been getting a lot of hate mail, but never got around to it. I’m sure you have thick skin and know that money can sometimes bring out the worst in people… but it’s still a bummer to work hard to help people and have them be unappreciative or hateful. The vast majority of your subscribers are very satisfied and grateful to you!

In addition, I really appreciate your updates. It allows me to get a better idea of who you are. Thanks for being such a good, positive person and sharing your knowledge.

If you missed your chance to turn a small stake into over $1 million with marijuana stocks… don’t worry. Because it’s not too late to become the next marijuana millionaire… Learn more here… 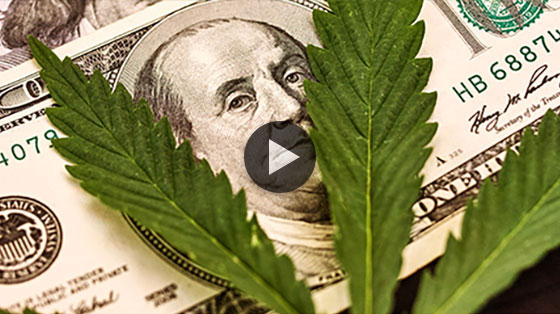