Nick’s Note: Today, we’re taking a break from our usual beat to bring you a big-picture view of what’s going on in the world from longtime PBRG friend Doug Casey.

In today’s essay, Doug asks the question: Is America currently a police state? He believes so… and that it’s only going to get worse.

And while no one can predict exactly when it’ll happen, Doug says that “the real catalyst is going to be the next 9/11-type event.” Read on to see why…

Is a police state in the U.S. possible? Absolutely.

That’s because people are essentially the same the world over, regardless of their culture, religion, race, or what-have-you. A certain percentage of them are sociopaths.

There is a standard distribution of sociopaths across time and space. It’s a function of Pareto’s Law, better known as the 80-20 rule. 20% of the people do 80% of the work. Another 20% are responsible for 80% of the crime. 20% of the population always winds up with 80% of the wealth. And so forth, through all areas of human endeavor.

This observation can be represented by a bell-shaped curve—a “standard distribution”—with a small minority at each extreme, but the large majority in the middle. The people who will take us to a police state are sociopaths—criminal personalities who don’t respect the liberty or property of others. And sociopaths gravitate towards government, and eventually come to control it.

My view is that 80% of human beings are basically decent, get-along, go-along types. 20% are what you might call potential trouble sources that can go either way. But then you take 20% of that 20%, and you’re dealing with the sociopaths.

When social conditions reach a certain stage, these really bad guys come out from under their rocks and take advantage of the situation. We’re seeing that right now in the U.S., across the political spectrum. Just as we’ve seen in the past in hundreds of places throughout history.

A major tipping point occurred almost 18 years ago on September 11, 2001 with the attacks in New York and Washington, D.C. They were disastrous. But not nearly as disastrous as the government’s reaction to them.

Among them is the creation of the Department of Homeland Security. Anybody who speaks German knows that a reasonable translation of Homeland Security is Geheime Staatspolizei, which is usually abbreviated to Gestapo. Anybody that goes through airline security these days should ask themselves, “Where the hell did they find these people? Didn’t they have jobs before they went to work for this moronic agency?”

The answer is that there are people out there who like wearing costumes, and are willing to boss, herd, interrogate, and go through the dirty laundry of their fellow citizens. They take their jobs seriously, and you better not even look at them sideways. There’s no reason to believe it’s going to get better as they groove into their jobs and their employer cements itself into place. More likely, the trend will accelerate.

Is America currently a police state? Well, let’s see. You can still get in your car and go anywhere, although you might be stopped by the police and you might be detained if your papers aren’t in order. Or if the officer thinks you’re not properly respectful. Or if you have “too much” cash.

Was there any particular day that Germany became a police state in the 1930s? I’m not sure you can put your finger on any one particular day, even after Hitler was legally and democratically elected. It was a progression, with new laws, new regulations, and new taxes every day, while more fear and hysteria were worked up among the populace. Kristallnacht didn’t occur the day after the National Socialists took power.

It’s a case of the frog being put in a kettle of water and the temperature is gradually raised to a boil. That’s what’s occurring in the U.S. After 9/11, in addition to Homeland Security, we got the Patriot Act, with, among other things, its suspension of habeas corpus. That means the government can lock anybody up for any reason and not even have to tell them why.

It can accuse them of being an “enemy combatant”—a neologism that justifies anything and is robotically and thoughtlessly accepted by Boobus americanus—and anything is possible… including a trip to a CIA black site in some Third World hellhole. This is something I thought was settled in Western Civilization with the Magna Carta and King John. But we’re going backwards in most areas of personal freedom. And America, of all places, is leading the way—even while falling behind economically.

I don’t know if I can put my finger on exactly when we’re going to go over the edge, but if I was going to guess, I would think the real catalyst is going to be the next 9/11-type event. And I don’t doubt it’s going to happen.

How are we any different from the Germans in the 1930s? This was one of the most civilized, best educated countries in Europe and it still fell into the abyss. I suppose we’re a bit different. Americans are addicted to welfare, anti-depressant drugs, food, and electronic devices. That should certainly give us a better outcome…

There’s a joke I like to tell… Let me ask you this: Which is the gravest danger? Is it the ignorance or is it the apathy of the average American today? Stumped? Here’s the answer: I don’t know, and I don’t care.

Nick’s Note: Regular readers know Doug Casey is a living legend. He’s made multimillion-dollar fortunes as a globetrotting speculator… written three best-selling books… traveled to 155 countries… and shocked millions of Americans on national TV when he appeared on Phil Donahue’s show in 1980.

But it’s been almost 39 years since he’s sat down in front of a camera for such a wide-ranging, incisive interview…

That’s why we’re excited to announce the world premiere of Totally Incorrect: LIVE, starring Doug Casey. In this documentary-style film, Doug will go on record with five controversial and “politically incorrect” predictions—plus reveal details on five new speculations that could go up 1,000% in the next year…

The event airs at 8 p.m. ET this Wednesday. And you can view the official trailer right here… 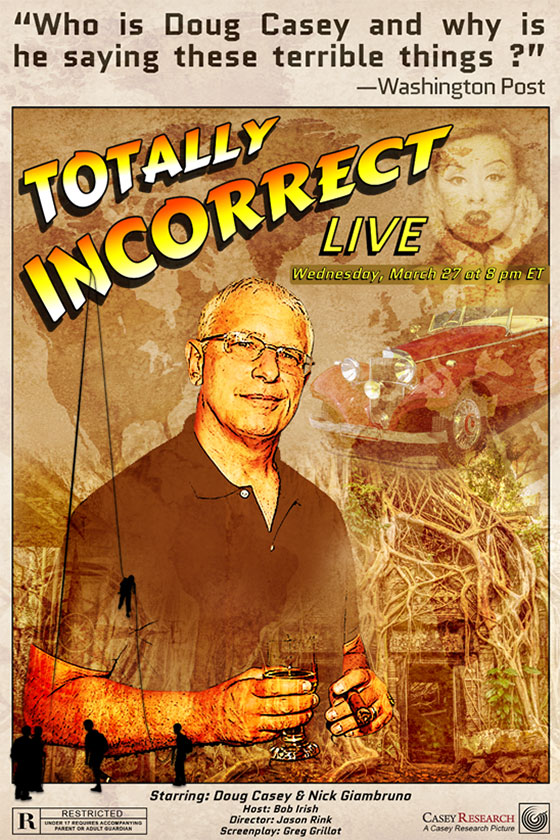