Nick’s Note: Regular readers know we think the media’s clamor over the trade war is just noise. Despite the incessant gloom and doom by the talking heads, the economy is doing well…

That’s why today we turn to PBRG’s Wall Street insider, Palm Beach Trader editor Jason Bodner. Every day, Jason runs his proprietary system and pulls more than 120 data points on over 4,000 U.S. stocks. He’s been crunching the numbers. And here’s what they’re telling him about the trade war…

Nick: Hi Jason, I just read your latest Palm Beach Trader update (PBT subscribers can read it here). In it, you said the media overstates the trade war. Why do you think that?

Jason: Yes, the trade war is definitely overblown… And if it’s scared anyone out of the market, that has cost them a lot of money.

I’m going to talk about the media… Let me preface it by saying I’m not anti-media. But you also must know how to read between the lines.

I’ve spent years on Wall Street watching how the media manipulates stories to get viewers. I don’t hold this against them. They get paid by advertisers. And advertisers aren’t going to pay if people aren’t watching.

For the past two years, the media has been constantly talking about the Russian thing… whether or not President Trump colluded with Putin. That’s lost a little of its impact on people. Now, the story du jour is the trade war.

So the media takes the trade war and sensationalizes it to make it sound like a bigger deal than it is. That’s how they get people to stay tuned in.

Nick: Very true… That’s why I like our business model. We rely on subscribers, and if they’re not happy with us, they cancel.

So what are you reading between the headlines?

Jason: I’m seeing a healthy, robust economy. And I predict it will continue to be this way as the Trump administration works out these trade deals.

Like you, Nick, I believe Trump is going to pull a rabbit out of the hat in September or maybe October.

I don’t want to seem complacent… but I just don’t buy into the fear factor.

Jason: Even if trade deals don’t happen, the data is telling us that tariffs won’t impact most companies.

FactSet is a major market data firm. Just a week ago, it released a report. The report said that 61% of the companies that mentioned tariffs during their second-quarter earnings calls saw no material impact.

And even if tariffs are hurting businesses… President Trump’s tax cuts will help cushion some of the blow. So will the surging economy.

Nick: I know you like to look at numbers. Can you tell us what they’re showing?

Of those, 80% beat their earnings-per-share estimates. The five-year average of companies beating expectations is 70%.

So, while the Facebook and Netflix misses get all the headlines (because they’re scary), companies are growing faster than we thought. Both sales and profits—the top and bottom lines—are improving. That’s very bullish.

I’m a data-driven man. I don’t like investing on gut feelings. I’m always digging into the data before putting my own—and my subscribers’—money at risk.

Right now, the data says we should be bullish. I hope everyone avoids the media hype and stays invested.

Nick: Awesome. Before I let you go, are there any sectors you’re looking at right now?

Jason: Yes. But first, it’s important to recognize that the summer is always a lag time. Traders and portfolio managers are all on vacations… and there isn’t a lot of money moving around. This also usually means more volatility. So you need to be patient this time of year.

That being said… I think all sectors look good right now. But the sectors I’ve seen with huge institutional buying the past three weeks are industrials and healthcare.

And as you’ve pointed out in the Daily, these sectors should soar as trade tensions lessen. So I’m looking closely at them.

Nick: You’re right, Jason. Those two sectors have been on my radar.

Thanks for your time.

P.S. As Jason says, he’s constantly looking at data. We don’t know of any market analyst who crunches more numbers than he does. If you’d like to ask Jason a question, click here to send it… Just remember, we cannot give personalized investment advice.

During the event, Teeka received thousands of questions. If you missed it, we’re running a replay until midnight tomorrow. You can watch it right here… 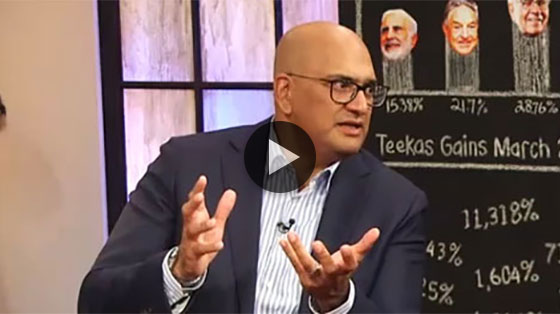