Nick’s Note: Venezuela’s political crisis is hitting ordinary folks the hardest. They’re barely scraping by. If you think it can’t happen in the U.S., my colleague Greg Wilson says think again… In today’s must-read essay, Greg explains how to protect your wealth when the government can’t.

First, they sold their car.

Then, they downsized from a house to a small apartment.

Next, they cut meat from their diet. And now they skip meals to ensure survival.

This is the story of Vanessa Posada and her husband Adolfo.

They live in Venezuela. And their money simply doesn’t go that far anymore.

Falling oil prices have sent the economy into free fall. Per experts, the inflation rate is 720% and rising.

And today, an estimated 93% of Venezuelans don’t have enough money to buy food.

It’s a sad story… especially considering that Vanessa did everything right.

She completed her university studies. Then she got a job as a schoolteacher. And she later got married and had a child.

But that’s not enough to save her from government money gone bad.

Consider that at the beginning of 2014, one Venezuelan bolivar equaled roughly 16 cents. Today, that bolivar will supposedly get you just 10 cents—a 38% decrease.

But that’s the official rate… the one no one pays attention to.

That means Vanessa’s bolivars are worth 99% less than just three years ago.

This story shows how governments can inflate a currency away. And it can leave those using that currency in a dire situation.

There’s a way Vanessa could have protected herself from government-driven inflation.

I’ll show you that in a moment. But first, don’t think it can’t happen to you.

Venezuela is an extreme case. Folks tend to dismiss it. They think it can’t happen in their country.

But there’s no shortage of extraordinary situations going on in developed economies, too.

So far in 2017, Swiss banks have paid $1 billion just for the privilege of holding their deposits with the country’s central bank.

Swiss banks are so worried about getting their cash back, they’re willing to take less of it in the future.

Ten years ago, no one even thought this was possible.

What ever happened to earning interest?

And just last week, the European Union let slip that it would freeze bank accounts if there’s a bank run.

A person familiar with the German government’s thinking recently told Reuters, “The desire is to prevent a bank run, so that when a bank is in a critical situation it is not pushed over the edge.”

The only problem: It wants to use your money to do it.

The worst part is that it would be an ex parte procedure. That means without YOUR knowledge.

Per the European Commission, this would have a “surprise effect” and reduce the chance of you moving your money elsewhere.

Should this happen, we’d once again see the value of currencies inflated away.

So if you can’t trust government money, what can you trust?

Getting Out of Government Money

The solution is simple: cryptocurrencies. And the best place to start is bitcoin.

You need to find a way to protect yourself so that you’re not relying solely on vulnerable paper currency.

Bitcoin isn’t owned by any government or any bank. And it has a fixed supply.

Politicians and economists can’t inflate it away.

The world is waking up to this fact. And as it does, we’re going to see capital flow out of the old, corrupt government system and into cryptocurrencies.

In fact, it’s already happening. Just look at the chart below. 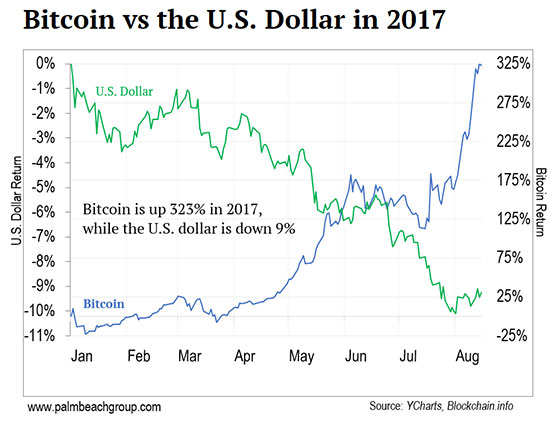 As you can see, money is flowing out of the U.S. dollar and into the future—bitcoin.

The trend is just getting started.

It’s time to get one foot in the door, and protect yourself in the process.

Bitcoin Breakout: Our favorite cryptocurrency continues to power higher. As of this writing, bitcoin reached a new high of $4,501. That’s nearly a 900% rise since we recommended it back in April 2016. Further, bitcoin is up more than 40% in August… and more than 280% this year. And in just the past two days, the value of the overall cryptocurrency market has gained $11 billion—topping out Sunday at a record $137 billion. Our thesis still holds… Buy some bitcoin today.

Game-Changing Technology: Jack Dorsey is the CEO of Twitter and mobile payments company Square. During a recent interview, Dorsey said the blockchain’s ability to decentralize financial transactions makes it a game changer.

Square is already accepting bitcoin as a form of payment, and Dorsey said he has a personal investment in bitcoin…  but he didn’t say how much he holds. He also claimed that a lot of his friends and family members are asking him how to invest in the digital currency. It’s just the latest example of smart people jumping on the bitcoin bandwagon…

Profitable Trend: Yesterday, we told you that rising corporate profits in the second quarter were a sign that the market is on track for more gains. Now comes more good news for the bulls.

Per Bloomberg, of the 454 companies in the S&P 500 that have reported second-quarter results, 68% have beaten analysts’ average estimates for revenue. And 78% have topped per-share earnings expectations. The quarter is on pace to post the highest number of S&P 500 companies beating sales estimates in 13 years. Of course, regular Daily readers know we’ve been way ahead of this story. In fact, we showed you how to ride this bullish trend just last month.

Will you buy gold after watching this video? Below, the guys over at Agora Financial show thousands of readers how to instantly generate cash from gold…

And all it takes is 1 minute and 42 seconds. 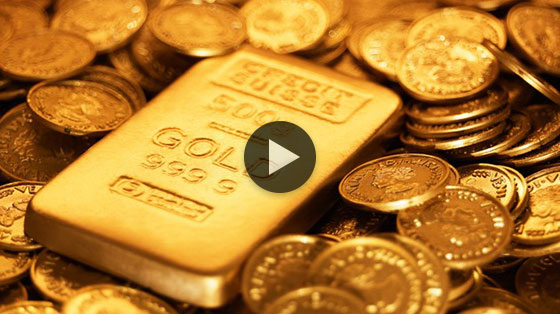