Nick’s Note: Right now, Palm Beach Letter editor Teeka Tiwari sees some similarities between today’s bull market and the bull market of 1990. That summer, the market dropped 20%. But it was a temporary “reset.” By the end of the year, the market was back in positive territory.

In this essay, Teeka shares one of the “hiding spots” he used to protect his wealthy clients’ money from market resets… and a similar one you can use today…

“Teeka, the market is booming. Why are we buying government bonds?!”

The guy on the phone was my biggest client. I had him in $2 million worth of 9% U.S. government bonds… and he was mad.

I knew this was going to be a tough call.

In January 1990, we had bought a ton of stocks that were doing great.

But since the early summer of that year, I had stopped buying new stock positions.

I knew the market looked good over the long term… but I was fretting over short-term action.

There were a few things that had me worried:

As the chaos of the trading room washed over me, I leaned back in my red leather chair and breathed deeply.

“Jim, you’ve got to understand I love the market long term. I think we’ll go much higher, but short term, the market looks toppy. The smart play here is to hide out in safe income,” I said.

“But the market keeps going up,” he retorted.

“And we’ll make a ton of money on that action with our open positions,” I shot back.

I went on to say: “The market is complacent right now. Hiding out in income is the right move. That way, if the market takes a dive, we can rotate out of income back into growth.”

During the summer of 1990, I had to field dozens of calls like the one I did from Jim.

Everyone was bullish, and I was the “bad guy” telling my clients to be cautious and buy bonds.

In 1990, I had no idea we were in what would be an 18-year long-term bull market. (I’d later learn we were in the early stages of what I call a “Golden Ratio” period.)

All I knew was I loved the market long term but didn’t like it short term. I knew if I was patient, better deals would present themselves.

The scenario played out exactly as I had predicted.

Saddam invaded Kuwait… The junk bond market blew up and took the nation’s banking system with it… And along the way, commercial real estate values crashed. From 1990–91, the stock market dropped 20%.

All of the uncertainty caused the Fed to cut rates. They went from 8.15% to 6.15%, and my “boring” government bonds soared 30% in value. We were making money hand over fist in the bond market.

Most important of all, we were able to redeploy those bond profits back into stocks at much better valuations.

While everyone was licking their wounds after the mini crash and terrified to touch stocks, we went on a buying spree.

It was a wonderful time to be a buyer.

My clients were ecstatic. I’m sure they bragged to all their friends how smart they were to go all in when the market got hammered.

I didn’t argue with them. My commission checks were huge that year.

The stock market is on fire again.

Since the U.S. presidential election, the S&P 500 is up almost 17%. The Dow 30 is up about 18%. During this period, our portfolio performance has been amazing.

But the upward surge in stock prices doesn’t happen in a straight line. Even in a long-term bull market, stocks “reset.” Just like they did back in 1990.

Today, I think another reset period could be coming.

Much like in 1990, I see three dark clouds on the horizon that lead me to believe we’ll be able to buy stocks cheaper later this year:

No. 1: The Market Is Expensive: As of this writing, the S&P 500 has a P/E ratio of 23.94. That’s according to data from The Wall Street Journal. That’s about what the market was trading at right before the 1987 crash.

No. 2: Investors Are Complacent: The CBOE Volatility Index (commonly known as the VIX or “fear gauge”) measures the market’s expectation of 30-day volatility. As you can see in the chart below, the VIX is at a 23-year low. 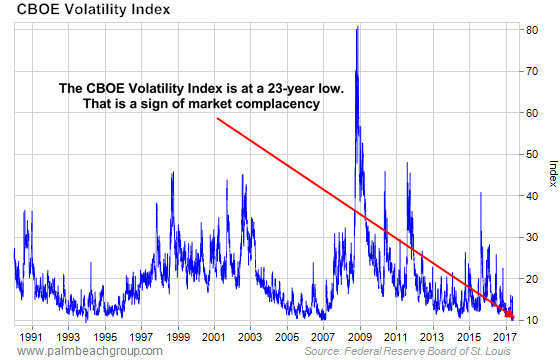 A low reading like we are seeing now suggests that most of the market expects very little volatility. That means it’s showing complacency, and you should be concerned about a sell-off.

No. 3: Trump’s Economic Agenda Is in Trouble: The latest leg of this bull market kicked off after Donald Trump was elected president. The S&P 500 has rallied about 17% since the post-election lows. It’s been a fabulous run for us. But I want you to remember why stocks have been running.

The president made two massive promises:

The $3.5 trillion added in market cap since his election clearly shows that Wall Street believes he can get it done.

But what if he can’t?

Four months ago, getting these two promises passed looked like a done deal. But now, I’m not so sure.

The president finds himself embroiled in several scandals. Political capital that should be spent getting his domestic economic agenda passed is being squandered on damage control.

As an investor, I’m worried.

Stash Your Cash In This Hiding Spot

In the 1990s, I waited out market squalls in safe U.S. Treasurys. But with interest rates at historic lows, bonds aren’t a good option today.

Instead, you should consider other income investments like preferred stocks.

A preferred stock is a bond alternative.

But to be clear, they are not bonds. Unlike a bond, companies will not go into default if they cannot pay a preferred stock dividend. But they are prohibited from buying back common shares and paying common dividends until it satisfies its payments to preferred shareholders.

The other thing I like about owning preferred stocks is their preferential tax treatment. When you buy bonds, you are subject to full federal income tax. On the other hand, most preferred stocks are considered to be qualified dividend investments (QDI) eligible.

When a preferred is QDI eligible, you’ll get taxed at the capital gains rate (between 15–20%) instead of the ordinary income rate (which can be as high as 39.6%).

When investing in a preferred stock, be sure to pay attention to the company’s credit rating and strength of their overall business. Some of the most reliable preferreds are issued by large financial firms and utilities.