Interest rates are on the way up.

The chart below tracks the 12-month LIBOR—the interest rate that sets the cost of borrowing for trillions of dollars’ worth of loans. The rate is four times what it was in 2014 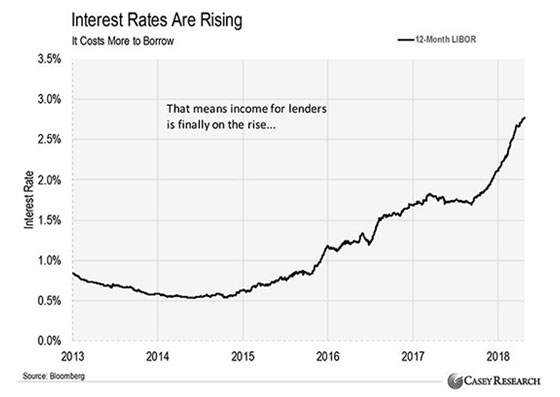 That means borrowers with LIBOR-linked loans pay more interest on those loans today than they did last week, last month, or last year. This trend will continue for a while. Interest rates went down for 35 years… They’ll go up for more than one or two.

But that’s not what interests us… We’re interested in the U.S. Treasury. It has an insatiable appetite for debt. It also pays more to borrow as rates rise.

As I type, the Treasury’s website says it’s on the hook for $21,055,498,294,426.90 with no sign of slowing down. Thanks to the Fed’s ultra-low interest rate experiment after the housing collapse, it got used to borrowing for nothing. That’s changing.

Here’s what the government pays right now to borrow for various time periods. It’s willing to pay these rates to anyone willing to lend it money. 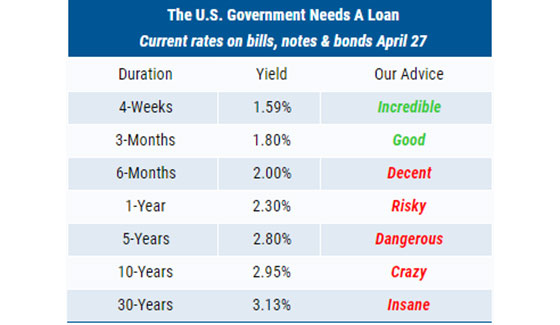 I keep a somewhat hefty amount of money in my savings account. I’m not interested in the 0.01% yield I get on the account. There’s a practical reason I keep money there.

Between quarterly tax payments, life insurance premiums, property taxes, and investment commitments, I almost always have a big payment on the horizon. I want to have the money ready to go when I need it.

Starting this week, I’ll lend that money to the U.S. Treasury. I’ll take in 159 times the interest rate my bank offers.

I opened an account with the U.S. Treasury at its Treasury Direct website. It took about five minutes to complete the forms. This account links to my bank account. Trust me, they need the money, so they’re not making it too difficult to set up.

Now, I don’t have much faith in the long-term viability of the U.S. government—or any government for that matter. So I’m not interested in tying my money up with them for years on end. Four weeks, however, is a term I’m comfortable with.

The Treasury’s four-week bill auction happens once a week. I have $20,000 worth of personal expenses coming up towards the end of June. Instead of leaving that money in my savings account earning 0.01%, I’ll participate in this week and next week’s bill auctions.

I logged into my Treasury Direct account and prescheduled my bid in the two auctions. After each auction, I see Treasury bills in my account with the corresponding interest rate and maturity date.

Four weeks later, it redeems the bills and deposits the principal plus interest back into my bank account. If I don’t need the money until July, I can schedule the four-week bills to roll over for another four weeks.

That beats the $20 per year my bank offers. Since I split the money between several weekly auctions, I always have some portion maturing in case something unexpected comes up.

I think the three-month notes with a 1.8% yield look attractive as well. I plan to lend the Treasury a smaller amount on that duration. Beyond that time frame, I’m not interested since rates are on the upswing.

As a reminder, this is not an investment. This is cash management. I have this money sitting in cash because it’s earmarked for upcoming expenses. It’s entirely separate from funds I buy stocks with, invest in private placements, or use for any other investment.

By loaning it to the U.S. government, I’m making 159 times what my bank offered me.

Since I don’t see it failing in the short run, this is a completely risk-free return.

Here’s a link to the Treasury Direct website if you’d like to check it out for yourself.

P.S. Every month, I show my readers what’s really happening in the markets… and the best way to take advantage of them. If you’re not a subscriber to my new Strategic Investor letter, you can sign up for a risk-free trial right here.

It can make you 1,093% MORE MONEY on average than his typical trades. But It only happens once per year—and that time is now. 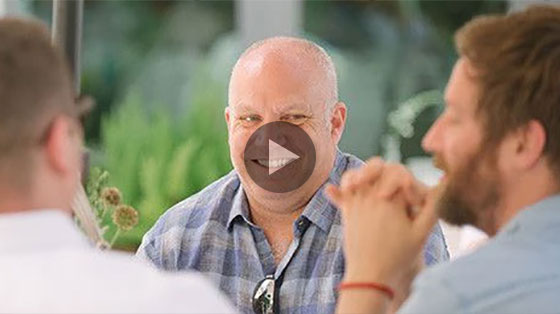