The world has a new richest man. And he’s betting $1 billion of his riches—every year—on a new trend…

After Amazon released earnings on October 27, founder Jeff Bezos leapfrogged Bill Gates as the wealthiest person alive, according to Forbes.

Bezos is one of the greatest visionaries of our generation. (In yesterday’s Daily, we told you how Bezos turned Amazon into a “modern monopoly”.)

He saw early on that the internet would be used for commerce. And he started by selling books. But that quickly spread into selling almost everything else.

But that’s not the only grand vision Bezos had.

He also realized that all those people starting websites would need somewhere to house their data. Amazon Web Services was born. And it is now Amazon’s most profitable division.

Amazon is also getting into business-to-business sales, artificial intelligence, and grocery stores.

Wherever Bezos sees opportunity, he dives in.

He’s pouring those billions into a new industry. And if you want to place a small bet on his vision, you’ll follow suit…

Bezos is investing billions in his private space exploration company called Blue Origin. The company is creating technology that would allow space tourism.

And he isn’t the only one making big bets on space exploration.

Visionary entrepreneurs such as Elon Musk, Richard Branson, and Peter Diamandis have each started their own private space companies.

And investors are piling money into them. 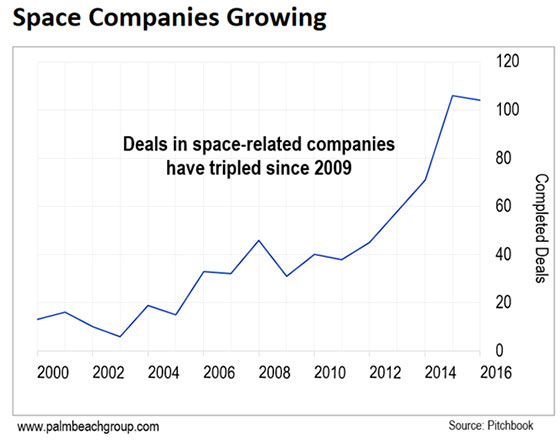 According to PitchBook—a leading research firm for private equity and venture capital—deals involving space-related companies have tripled since 2009.

The reason is simple. The space industry is about to take off.

According to a recent Bank of America Merrill Lynch report, the space industry will grow to $2.7 trillion by 2030—eight times bigger than it is today. That’s 18% annual growth for the entire industry.

Some companies will do even better than that.

We believe space exploration is a massive opportunity for investors to make a fortune.

Of course, you won’t be able to invest in private companies alongside Bezos, Musk, and Branson. But there are a few ways you can potentially profit from this trend.

The Best Ways to Get into Space

A safer way for smaller investors to get into the space race is to buy larger aerospace companies like Boeing, Lockheed Martin, or Northrop Grumman.

Boeing and Lockheed partnered on a joint venture called the United Launch Alliance, which runs missions to the International Space Station for NASA.

Now, these aerospace companies only get a small percentage of their sales from this emerging trend.

The bulk of their revenues come from massive government contracts… which is pretty much guaranteed revenue forever. (That’s another trend we’re bullish on. See “Trump’s $700 Billion Spending Spree Will Boost These Three Companies.”)

To get greater exposure to the space exploration industry (and potentially higher gains), you must dig deeper and find smaller, more speculative companies.

One company that jumps out right away is Aerojet Rocketdyne, which we hold in our Elite 25 portfolio. Aerojet makes futuristic defense systems for the military and parts for rockets.

Other ways to get into this space is to buy companies that operate, service, or make satellites. A few that stand out are Inmarsat, Intelsat, and Loral Space & Communications.

Remember, these are speculative plays… so don’t go too heavy. Just a small stake in space exploration companies could really juice the future returns of your portfolio.

This Overlooked Metal Is Making a Big Move

We often talk about gold and silver; they’re the sexy, shiny metals everyone pays attention to.

But most people overlook one of the fastest-growing metals today… even when they see it laying on the street.

The metal I’m talking about is nickel. And there’s one major catalyst pushing it higher—the solar industry.

As I told you a couple weeks ago, solar is the fastest-growing energy source in America. We expect the residential solar energy industry to grow 600% by 2021.

And although nickel isn’t a primary metal in solar panels (yet)… it is a major component in the lithium-ion batteries needed for storing solar energy.

Battery demand alone could increase the demand for nickel by 25%. 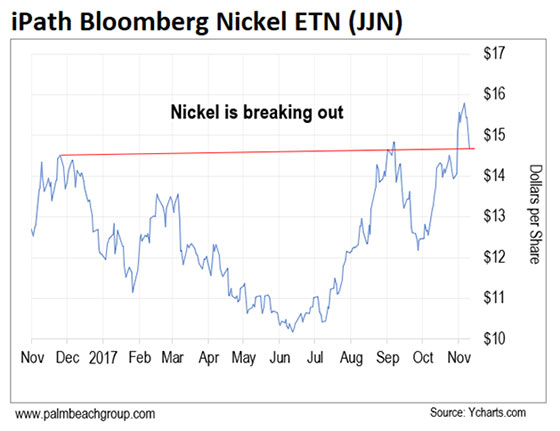 As you can see above, nickel just broke out to new 52-week highs.

In eight hours, this trader almost lost his entire $1,000,000 life savings. But by using this “secret key” technique… he saved all his money… generated a fortune… and got to retire at 42, with more security than he’d ever imagined.

It wasn’t a one-time tactic. He’s been quietly using it for the past 26 years to make millions. Check out his story here… 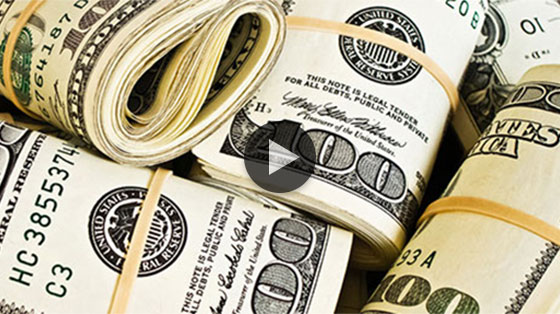