Nick’s Note: We’re always on the hunt for money-making ideas… and there’s few bigger than the rapidly growing market for electric vehicles (EVs).

Most people will play this megatrend by investing in EV automakers. But my colleague Justin Spittler says there’s an even better way to profit from this trend…

Retail investors applied for 3,201 more shares than the company offered.

Fund managers bid for 537 times the number of shares available.

Demand for the stock was truly overwhelming—so much so, that it surged 44% on its first day of trading.

The rise was so explosive, regulators put a stop to it. They halted trading for the day… But that didn’t keep investors from piling in. The stock more than tripled in value over the next six weeks.

See for yourself. Below is a chart of Contemporary Amperex Technology (CATL). 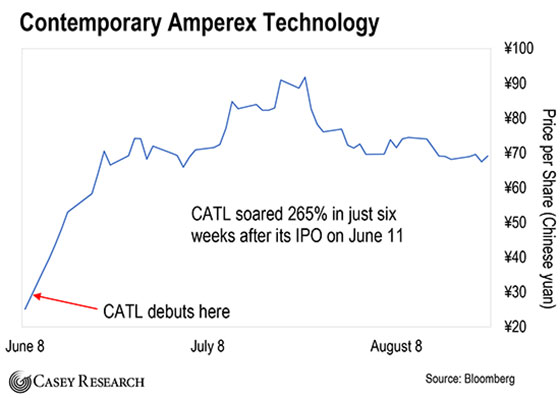 It trades on the Shenzhen Stock Exchange.

This is, of course, because it’s a Chinese company. It’s the country’s largest lithium-ion battery maker.

These batteries power the smartphone in your pocket. They also power electric vehicles (EVs).

The EV market is exploding—and it’s creating a massive money-making opportunity today. More on that in a second…

There were just a few hundred EVs in the entire world. Only the “elite” drove them.

Today, it’s a different story. There are more than a million EVs in the world.

Of course, that’s just a taste of what’s to come. By 2027, analysts estimate that there will be 27 million EVs on the road. This means the EV market is poised to grow 27-fold over the next decade.

I say this because China is by far the world’s biggest EV market.

Of course, China’s EV market is just getting warmed up. To understand why, just look at the photograph below. It shows the skyline in Beijing, China’s capital… 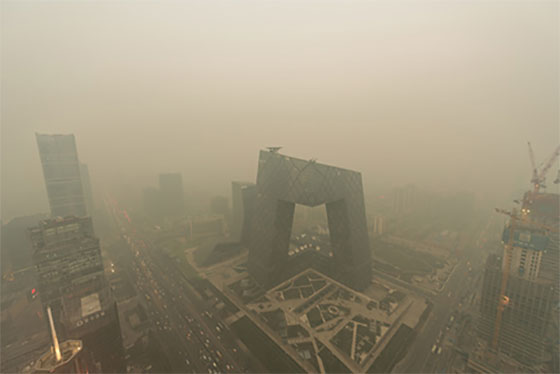 You can barely make out the buildings. 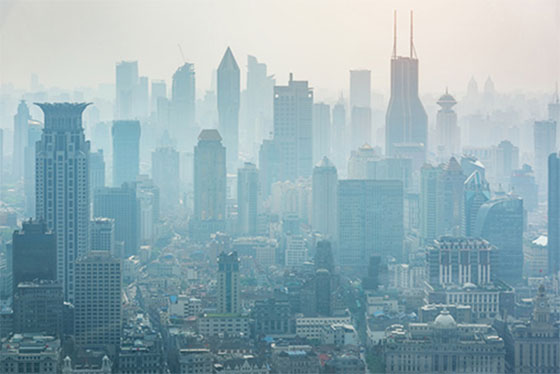 This is obviously a serious problem. The good news is that China’s trying to fix this. From Reuters:

China’s central government sees electric vehicles as a way for its industry to leapfrog ahead of international competitors, that have decades more experience in making petrol cars, while also reducing intense urban smog.

Once enough of those spaces are available, many Chinese cities are likely to go all-electric, banning internal combustion engines completely. And it is likely to happen well before 2035. One by one, China’s big cities will soon become places where people can breathe freely.

In short, there will soon be millions of EVs in China.

That’s why CATL’s stock exploded after it went public. Both retail and institutional investors desperately want a piece of this action.

Of course, CATL isn’t the only company in China trying to cash in on this megatrend. According to Reuters, there are 102 companies now making EV batteries in China.

Obviously, not all of these companies will survive. Many will go out of business.

That can make profiting off China’s EV revolution tricky.

No… I’m talking about betting on copper, nickel, and lithium.

These metals, as regular readers know, are critical to EVs.

In short, the EV revolution simply can’t happen without these metals.

They think the only way to play the EV revolution is by investing in electric car makers like Tesla… or component makers like CATL.

But speculating on these new strategic metals has proven to be an even more profitable way to cash in on this megatrend.

Garibaldi Resources, which mines nickel and copper, is a perfect example of this. It recently soared 3,622% in 10 months.

Nickel miner MBMI Resources recently gained more than 1,400% in just over a year.

Bell Copper is another example. Its stock surged 636% in under 11 months.

I could go on and on. My point is that these small mining stocks have handed savvy investors massive gains.

Now, I’m not saying you should buy these companies today. I’m merely using them to illustrate the kind of opportunity that’s staring us in the face.

And as impressive as these gains are, they’re just a taste of what’s to come. After all, we’re still in the very early stages of an EV revolution.

The best way to do this is with the companies that mine these commodities.

I’m not an expert when it comes to finding the top names in the space—but International Speculator editor David Forest is.

David’s one of the smartest guys I know. He’s a professional geologist with 20 years of experience in the oil and gas, environmental, and mining sectors. And right now, he’s bullish on copper, nickel, and lithium—three of the key metals in the EV revolution.

Now, out of fairness to his subscribers, we can’t reveal the specific miners he’s discovered… But for a simple way to capitalize on this major trend, David recommends buying the Global X Lithium & Battery Tech Fund (LIT).

This fund invests in a broad basket of companies involved in lithium mining, lithium refining, and battery production.

P.S. Make sure to check out David’s brand-new video presentation right here to learn about another major story he uncovered…

In short, President Trump just quietly signed what may go down in the history books as his most significant executive order. The ultimate goal? To identify and unlock over 1 million tonnes of a new “super-fuel” on U.S. soil.

It’s called “Brandt Oil,” and it’s quickly becoming the new oil standard. It’s opening up a rare opportunity to bring incredible wealth to you and your family—but only if you get in at the ground-floor stage we’re at now.

Millions of weird-looking cell phone towers are springing up like MUSHROOMS.

Estimates range from a few hundred thousand… to a few million nationwide within seven years.

Why are so many people concerned? 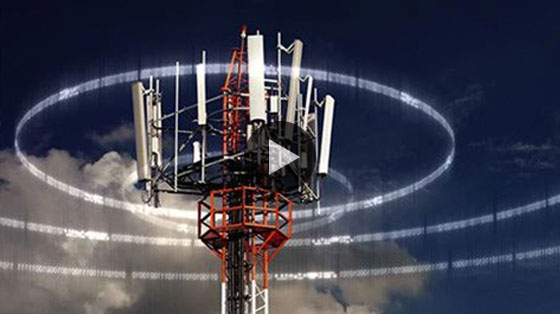