In 2007, Blackberry was the undisputed champion of the smartphone market.

People were so addicted to these devices… they were given the nickname “crackberries.”

During its reign, Blackberry controlled 25% of the smartphone market.

The popularity of Blackberry devices sent the company’s stock soaring 600% in just two years. But other companies saw this success… and wanted a piece of the pie, too.

It didn’t take long for competitors to release their own smartphones.

Apple got into the game with the release of its iPhone in 2007. And Google followed soon after with its Android line of phones.

That same year, Blackberry started its slide into obsolescence. After peaking in 2007, the stock had plunged 95% by 2011 (see chart below). 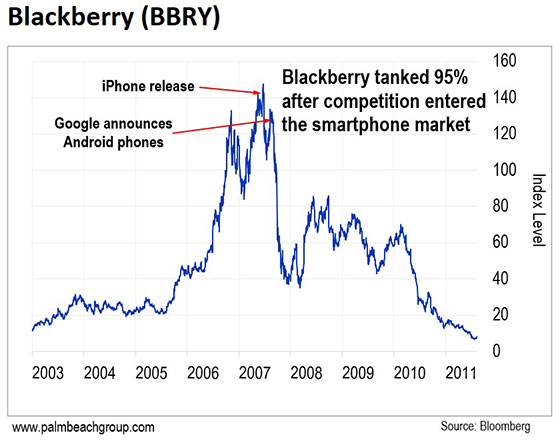 Another Wall Street darling could be facing a similar fate.

At the Daily, we don’t fall in love with a stock just because Wall Street’s on board. We like to dig a little deeper and look for future trends.

Right now, we’re seeing increased competition in the online streaming market. And that could spell trouble for a charter member of the FANG (Facebook, Amazon, Netflix, and Google) club.

Challenging the King of Online Streaming

Netflix was founded in 1997 as a video-on-demand and DVD-mailing service.

It eventually dropped the mailing service and grew into the online streaming platform giant we know today.

Netflix has 104 million subscribers across the globe. And the fast-growing company is now among the elite FANG club.

One newcomer is iflix. The company just received $133 million in new funding to unseat Netflix.

iflix offers streaming services in emerging markets for only $3 per month… That’s about 25% less than Netflix’s monthly subscription fee.

This is a big deal for Netflix… Half of its subscribers are abroad. And 75% of its current subscriber growth is international.

iflix isn’t the only competition trying to eat into Netflix’s subscriber base.

Disney recently announced it would pull its content from Netflix… and start its own streaming service.

And cable giant Comcast has teamed up with AMC and FX to create its own paid streaming services for those popular channels.

The One Thing That Drives Netflix Higher

No one in their right mind is buying Netflix because of its value. It’s a high-growth stock.

But what happens when the growth slows down… or stops?

Cisco Systems was a high-flyer during the 2000 tech boom. It offers an example.

The price-to-earnings (P/E) and EV/EBITDA ratios are two of the most common ways to value companies. At its peak, Cisco had a P/E of 230 and an EV/EBITDA of 123.

Both numbers are off the charts.

That means the market is 90% cheaper than Netflix.

And the only way Netflix can meet these massive expectations is to grow its subscriber base.

Wall Street expects Netflix’s base to grow by 20% per year over the next three years. That’s about 20 million new subscribers per year going forward.

So far, Netflix is on pace—it added 5.2 million last quarter.

But at the Daily, we’re forward-looking. And increased competition will put the company’s ability to add new subscribers to the test.

Netflix’s Line in the Sand

If you own shares of Netflix, I’m not telling you to sell immediately. The company is still in a strong uptrend. And stocks can go up much longer than you think possible. 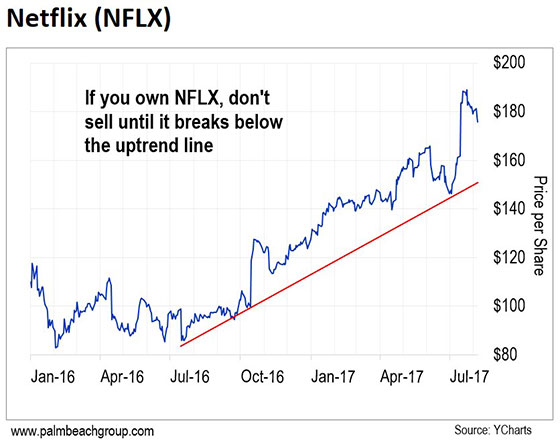 But you should pay close attention to the company’s trend line (the red line above).

I wouldn’t sell any shares until Netflix breaks below this line. Traders may also see that as an opportunity to short the stock.

Meanwhile, I’d be careful before opening any new positions in this company. If the competition catches up, it may share the same fate as Blackberry.

Another bellwether is at an all-time high…

Some stocks are great indicators of the economy’s health. And companies that dig up natural resources are among the best. 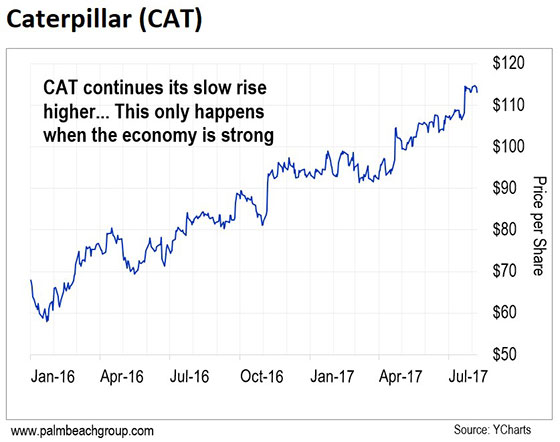 Companies like Caterpillar only reach new highs when the economy is strong.

Nick’s Note: Plenty of reader feedback from my August 9 essay on bitcoin skeptics (“This Common Misconception Is Robbing You of Massive Profits”).

From Ron J.: Wow! I just read Nick’s response to Greg B. I can’t for the life of me figure out why you’re getting this type of feedback. You folks have done an amazing job for us.

I’ve made tens of thousands off Teeka’s cryptocurrency recommendations. It’s “falling off a log” easy. Follow the instructions and above all be PATIENT. Teeka has drilled that fact into me. I am just sitting and waiting, and it is coming to me… in spades.

Anyone who is reading Palm Beach Confidential, and can’t make money in cryptos, is a dunce… pure and simple.

From Jim R.: I’m up almost $1 million since May on your cryptocurrency recommendations. I’ve never traded in any market in the past. So many thanks to Teeka and Greg Wilson for their step-by-step “hand holding.” I’ve learned so much about wallets, exchanges, and trading. Keep up the good work.

From Daniel B.: Congratulations and thank you for the wonderful and timely information that Teeka Tiwari and his team have been providing subscribers to this service.

From Jerry and Joan K.: Teeka and team: I want to thank you for giving us subscribers the opportunity to benefit from your knowledge and hard work in cryptocurrencies. The opportunity—at a very inexpensive price—is the greatest I’ve had after subscribing to investment letters for many years. My wife and I thank you very, very much.

Nick’s Reply: Thanks for the replies, folks. If you’re still a bitcoin skeptic, we’d love to hear from you. Tell us what’s holding you back from investing in this fast-growing industry right here.

Nick’s Note: Another reader has a question about our August Elite 25 update.

From Jim: I was wondering if I should use a stop loss with the Elite 25.

Longtime PBRG friend Porter Stansberry is disgusted right now. He says it has something to do with an ongoing threat in the investment world.

He’ll tell you what it is… and how it could make you 10 to 20 times your money… in the video below. 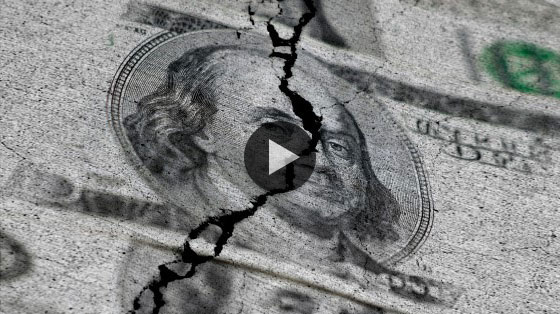