Four letters have helped the world’s best investors make money for half a century: PEAD.

No, it isn’t a performance-enhancing drug (PED) taken by athletes or some cryptic code that helps investors trade better.

Scholars Ray Ball and Philip Brown first documented the phenomenon in 1968. It refers to the tendency of stocks to continue rising for some time after an upside earnings surprise… and to continue falling after a downside one.

If you understand how this phenomenon works, you can find money-making opportunities on both the short and long sides of a trade.

I call this the “earnings trifecta”…

Multiple academic studies have shown that companies achieving this trifecta outperform the market by 2–4% during the following quarter. Annualized, that would beat the market by 8–16%.

Here at the Daily, we share ways for you to beat the market. And finding stocks that just completed the earnings trifecta is one way of doing so.

How to Play Trifectas on the Cheap

As I mentioned above, the earnings trifecta can boost stocks higher in the following quarter (the next 90 days).

These are great returns simply for holding for a couple of months. However, the current market is giving us an opportunity to make even more from the trifecta.

As regular readers know, the broad market dipped about 7% in October. And the good names fell with the bad.

These are great companies. But profit-taking by traders punished them and many other high-flying growth stocks.

Growth stocks are often the ones that reach the earnings trifecta. So the recent sell-off gives us a chance to pick up stocks that had great earnings at a discount.

The table below lists four stocks that beat their earnings and revenue estimates… as well as raised guidance. But they’re still down from their October highs.

These four companies not only achieved the earnings trifecta last quarter—they’re firing on all cylinders, too.

When the bull market resumes, these stocks should soar as investors revalue them and push prices higher.

As always, make sure you do your homework before investing in any company.

From Deck G.: Nick, although you may be absolutely right about your thesis on Trump’s trade war, I’d like to make a couple of observations…

First, it’s not helpful to use “the media” as a whipping boy. Last time I checked, Fox News—which seems prepared to defend anything Trump has done or will ever do—along with other newspapers and websites that lean right are still considered part of “the media.” “The media” seems like a bogeyman that means “whoever disagrees with me.” And using the term automatically generates support from a segment of the population.

Second, with the election just days away, what did you expect him to tweet? President Trump creates “news” when it suits his agenda and lies with such consistency that—without any evidence other than his own statement—I’m amazed you take it at face value and consider it further support for your thesis.

If there is a winner in the trade war, I hope it’s America. But I’ll believe it when I see it or hear it from a credible source. Trump is not credible by any normal standards. Just my two cents.

From Richard D.: You people are idiots. Trump tweeted that a trade deal with China was progressing just before the midterm elections. Minutes later, his advisors said that no such deal was in the works, and there had been no such talks.

Once again, Trump makes things up to create an impression that he’s doing something. He’s a liar and is dishonest to the American people. He’s made over 6,000 false and misleading statements leading up to the midterm elections. This is the roadmap that dictators have followed… and it’s sad that smart people can’t see through his lies.

Nick’s Reply: Thanks for the comments, guys. For our investment thesis, the truthfulness of the president’s statements is irrelevant. What matters to us is how Wall Street reacts to them. And the reactions are pretty predictable… When the president escalates his trade rhetoric, the market pulls back. When he tones it down, the market rallies.

Do you want to weigh in on this debate? Send your comments right here…

Regular readers know we’ve been warning you to stay away from long-term bonds. That’s because they’ll get crushed by Income Exodus.

As you can see in the chart below, the yield on 2-year Treasuries just reached a new multi-year high… 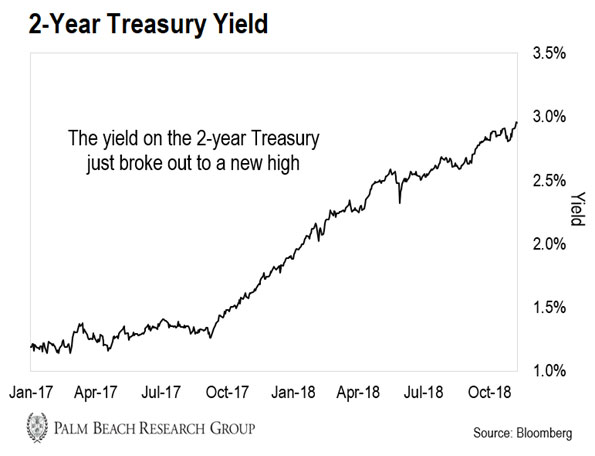 Although rising rates are bad for current bond holders, it does make bonds more appealing for new investors.

If you absolutely need to have some bond exposure in your portfolio, make sure they’re short-term bonds like the 2-year Treasury.

A once-in-a-decade tech event could create a whole new group of millionaires—starting November 14. Get all the details here… 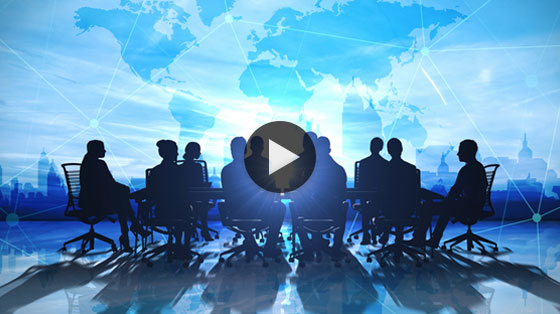