Fear is creeping into the market…

The VIX measures how much investors think the S&P 500 will move in the next year. It is commonly called the market’s “fear gauge.”

However, some analysts use the VIX as a contrarian signal. When the reading is low (like it is today), they say, “Investors have become too complacent. Sell stocks.”

But these clickbait headlines are not backed up by any stats. If these “analysts” ran the numbers, they wouldn’t be making these claims.

Today, the VIX is pretty low. So some analysts are worried about an unexpected drop in the market. 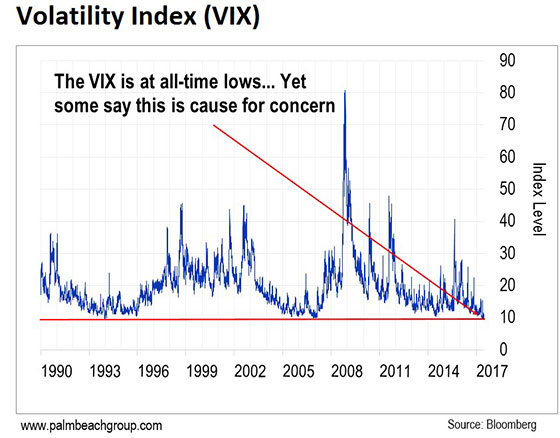 By using the VIX in a contrarian manner, they’re actually following conventional wisdom: The fear gauge is low, so now is the time to get out of stocks.

A true contrarian reading of the VIX would suggest otherwise: Stay in stocks over the next 12 months…

What the VIX Is Really Showing

I’m not going to get into the nitty-gritty of how the VIX is calculated. It’s confusing.

To be honest, most of the time the reading is meaningless—it doesn’t really predict future prices.

Over the past quarter-century, when the VIX dipped below 12, it was a signal that the market was fairly safe.

The table below shows the average and worst one-year returns over the history of the VIX.

(Data nerds such as myself like to look at these two metrics. The “average return” is what you can expect to make with a specific strategy. The “worst one-year return” is a measure of risk; it’s the most the strategy ever lost… It’s unlikely you will do worse than that number.)

First, let’s take on the doomsayers…

To do that, we’re going to look at the worst one-year return column.

Over the past 27 years, the VIX has closed “below 12” 525 times. Of all those times, the greatest loss investors ever had one year later was 17.9%.  That’s less than half the risk when compared to when the VIX is higher.

(For context, the market needs to fall 20% before it’s considered a bear market.)

This means the risk of loss is much less when the VIX closes below 12 than when it closes above 12.

Make no mistake… Losing that 17.9% in one year would be scary. But the market frequently recovers that much.

So history is telling us that no crash is coming within the next year.

Now, let’s take a look at the average one-year return column. This is what we expect to make in the market over the 12 months.

As you can see in the table above, the market’s annual average return is 8.9%.

Right now, the VIX suggests that we can see above-average market returns with below-average risk. That’s the holy grail of investing.

I love to find high-reward, low-risk scenarios like this. That’s when we make big money.

Don’t let people scare you out of the market because the fear gauge is low. That’s nonsense. There’s a calm because the market has little to fear over the next year.

I’m not saying to not be prepared for a crash. No one can predict when a crash will happen… Eventually it will. But for now, the storm appears far off.

P.S. One of my favorite ways to keep up with what’s happening in the stock market is to read Jeff Clark’s free daily newsletter every morning. At around 7:30 a.m. ET, I get his Market Minute email. It’s a quick five-minute read, and it tells me exactly what to expect from the market that day.

To make things as easy as possible, I asked Jeff’s team to make it so you can sign up with just one click right here. It’s completely free, so there’s nothing to lose by giving it a try. And he’s even got a free “Guide to Options Trading” you can download right from the homepage.

The S&P GSCI is a benchmark index for the commodities market, including gold, silver, and other metals; oil, coffee, cotton, and wheat.

In the chart below, I divided the GSCI by the S&P 500 Index. This gives us a relative measure of which is more expensive—commodities or equities. 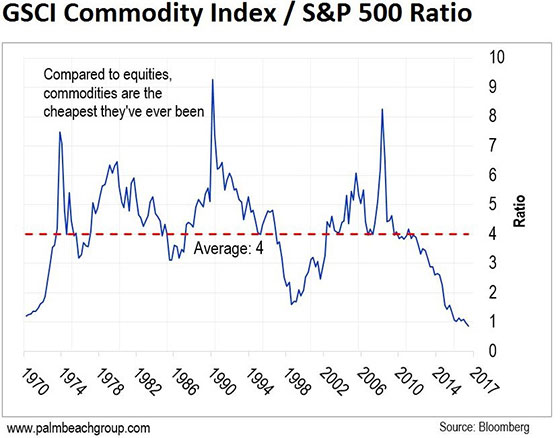 Now is a good time to add some gold, silver, and other commodities to your portfolio.

One day you’re saying “the weight of debt, lies, delusions, and claptrap is going to cause the floor to cave in.” (“Change… Whether You Want It Or Not” written by Bill Bonner on June 26.)

The next day you say “you should ignore the gloom and doom and continue to own quality stocks.” (“Three Reasons Why You Should Ignore the Doomsayers and Stay in the Market” written by Nick Rokke on June 27.)

Which one is the PBRG position? Bill Bonner was a guest columnist, so I would put more weight on what Nick Rokke wrote.

Nick’s Reply: Robert, I understand where you’re coming from. It can be confusing when we run what seem to be competing viewpoints.

But the future is uncertain, so I want to make sure everyone hears both sides of the story.

When I select guest essays for the Daily, one thing I like to do is offer an opinion that differs from my own. That way, you can read the bull and the bear cases for the market. I think this will help you make informed investment decisions.

However, Bill and I don’t differ that much. The confusion you have is more a matter of timing than anything else.

Bill believes a market crash is inevitable. I agree with him on that. However, my opinion is that we’re still more than a year away from a downturn. Nevertheless, it’s still worth learning about what’s coming in the future (even if it’s a ways out) so you can be prepared when it does happen.

From Ruban L.: Hi Teeka, I was hoping you could respond to an article by the Daily Reckoning regarding the “Death of Bitcoin.” In your opinion, what are the odds that the scenario is correct? I hope to hear from you soon in regards to this article.

Nick’s Reply: Thanks for the note, Ruban. When it comes to investing in cryptocurrencies, no one in the industry is better than our team: Palm Beach Letter editor Teeka Tiwari and his chief analyst Greg Wilson. Both Teeka and Greg have tackled this question on numerous occasions.

As Teeka pointed out recently in the Daily, bitcoin has been declared dead more times than we can count, and it keeps coming back stronger. And Greg wrote earlier this month that you should ignore the skeptics and continue to buy bitcoin.

I’ll leave you with a quote from Teeka on this matter: “The next time you find yourself being scared out of owning bitcoin by a negative article, do yourself a favor… Read the last 129 times bitcoin was declared dead.”