According to Daily editor Teeka Tiwari, this is the day “the genie came out of the bottle.”

For the first time ever, U.S. investors could easily get bitcoin exposure directly from their brokerage account.

The news sent bitcoin’s market cap to well over $1 trillion.

It’s an amazing accomplishment. Teeka first pounded the table on bitcoin in April 2016. Back then, its market cap stood at just $20 billion.

Then he pounded the table again during the Crypto Winter of 2018. Bitcoin’s market cap was just $65 billion.

Today, bitcoin has dipped from $1 trillion to nearly $900 billion as I write… But this is just the bottom of the first inning.

BITO is bringing bitcoin mainstream in a way we haven’t seen before. It’s opening the floodgates for more investors and institutions to pile into bitcoin and crypto as a whole.

I’m telling you this because we’re on the brink of another incredible moment in crypto… like the launch of the bitcoin ETF.

In fact, this may be the most important event since Teeka and I started covering this space in 2016… and it has special importance for us here at PBRG.

It all has to do with Ethereum… and the “Second Phase.”

The next stage of transformational software development will happen on the blockchain… not the internet. And Ethereum is the world’s most widely used blockchain development platform.

That’s why Teeka and I predict it will be the next trillion-dollar coin in market cap.

If you’re not familiar with it, the Second Phase will see Ethereum transition from a proof-of-work network (PoW) to proof-of-stake (PoS).

Just as we saw bitcoin soar higher after each of its “halving” events, we predict Ethereum will skyrocket as well after the Second Phase completes… along with multiple tokens tied to its ecosystem.

That’s why we have Ethereum – and a handful of tokens linked to it – in our portfolio.

But even more importantly, this Second Phase will bring our strategy here at PBRG – “Tech Royalties” – into the mainstream… just as BITO is doing with bitcoin.

The State of “Tech Royalties”

Longtime Daily readers know that staking is our primary way to generate income, or “Tech Royalties,” with our cryptos.

With Tech Royalties, you stake your crypto assets to their respective protocol or application. And then you participate in the network… Either to validate transactions or participate in governance.

In return, you receive more crypto as a reward.

And these rewards are no pittance.

In fact, while interest rates reach record lows and many companies cut their dividends, Tech Royalties in our Palm Beach Crypto Income service continue to average a yield of about 9.7%. That’s 670% higher than the current yield on the S&P 500.

So by investing in Tech Royalties, you can set yourself up for a steady income stream… and early adopters will see the highest rewards. 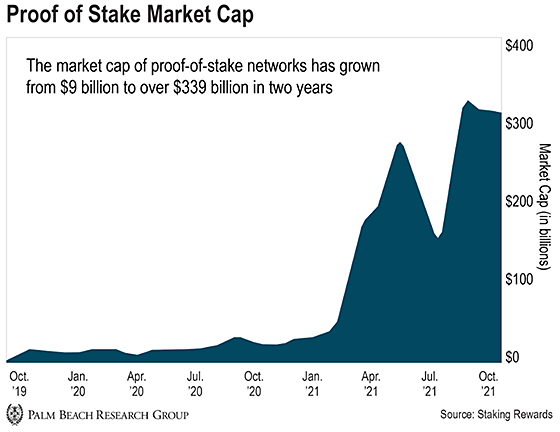 Just check out the chart below…

The combined market cap of proof-of-stake networks has seen incredible growth over the past two years, climbing from $9 billion in 2019 to over $339 billion this past October.

While some staking methods are available on Ethereum now, the launch of the Second Phase will make it easier for the masses to take part… and wake them up to the benefits of staking crypto to earn income.

That’s why we believe that once Ethereum completes the Second Phase, the staking industry will more than double.

This past summer, JPMorgan estimated the launch of the Second Phase would increase staking payouts across all networks to $20 billion in 2022. And $40 billion by 2025.

But those amounts are already woefully conservative.

And by our estimates, with Ethereum transitioning to PoS and continued blockchain growth, we believe total staking rewards can top $100 billion in 2022.

That means we’re starting to get into the same arena as dividend stocks, which are estimated to have paid out $1.4 trillion in 2021.

So just as the ProShares Bitcoin ETF brought crypto to the mainstream, catapulting bitcoin to a trillion-dollar market cap… the Second Phase will do the same for Ethereum – and boost other “Tech Royalty” cryptos.

2022 Will Be Banner Year for the Ethereum Ecosystem

The next stage of transformational software development will happen on the blockchain… not the internet.

And Ethereum is the world’s most widely used blockchain development platform.

That’s why Teeka and I predict it will be the next trillion-dollar coin in market cap.

But that’s just the beginning. Over the coming years, Teeka believes ETH could grow 10x from today’s prices.

So as we head into 2022, I suggest you get some exposure to ETH while it’s still trading at these levels. It won’t last long…

After that, if you’re looking to make generational wealth, Teeka and I have five coins tied to the Ethereum ecosystem that will see a slingshot effect from the Second Phase.

It’s like having leverage on Ethereum without borrowing any money.