Whereas Amazon focused on fast, free shipping… Jet would take the Costco approach: a fee-based service, but with better prices.

But it also wanted to hit the ground running. So it launched a competition called the “Insiders referral program” to incentivize people to help build its user base.

Those who referred the most sign-ups to Jet would win equity in the company. The top referrer would win 100,000 shares of Jet, and the following nine would receive 10,000 each.

That’s where a man named Eric Martin stepped in…

A marketer by trade, Eric had previously run for Congress in Pennsylvania. He used that experience of engaging with the public to boost his sign-ups. In total, his “campaign” efforts cost him $18,000.

And it worked. When the contest ended, Eric found himself the new owner of 100,000 Jet shares.

This wasn’t just a success for Eric, but Jet as well. In total, the contest brought in over 350,000 new sign-ups to the platform. That meant Jet already had a strong user base when it launched.

This mutually beneficial relationship is at the heart of a new trend taking the crypto income space by storm. It’s called “yield farming” (also known as “liquidity mining”).

Like Jet.com, it’s an innovative way for blockchain projects to grow their user bases and increase their liquidity. And many yield-starved investors are just waking up to its potential.

This is an entirely new way to make income from crypto. And today, I’ll tell you why now’s the time to prepare for crypto’s latest craze…

A New Way to Earn

Yield farming is part of an overall trend we call Decentralized Finance, or “DeFi” for short, and it’s going to become one of the biggest wealth-producing crypto trends in the next year.

It’s a category of financial applications developed on top of blockchains.

But more specifically, yield farming is a subset of “Tech Royalties,” a part of the DeFi ecosystem that’s unfamiliar to most investors.

With Tech Royalties, you stake your crypto assets to their respective protocol. That helps secure the network. In return, you receive more crypto as a reward.

In fact, while interest rates reach record lows and many companies cut their dividends, Tech Royalties in our Crypto Income Quarterly service continue to average a yield of 10%. That’s 456% higher than the current yield on the S&P 500.

So it’s no surprise the excitement for DeFi is growing… 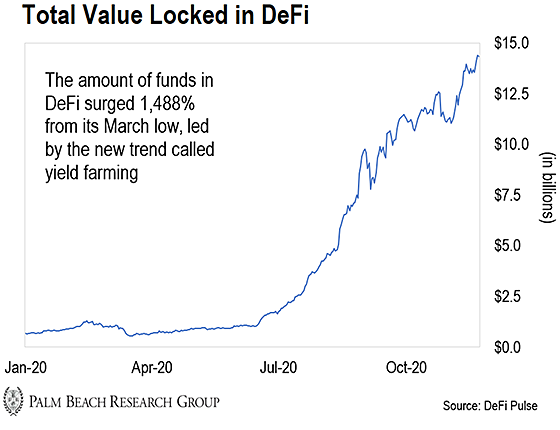 You see, DeFi projects have started incentive programs to attract liquidity to their protocols. And they’re doing that by issuing governance tokens.

And liquidity refers to the ease with which you can trade an asset without affecting its price. It’s determined by the volume of trading activity.

Look, it may sound complicated. But all you need to know is this…

In the last month alone, the crypto market has exploded… and that’s just a drop in the bucket compared to how far crypto has come since the sector plunged in March.

Look at bitcoin. It’s up more than 348% from its March lows.

Remember, what’s good for bitcoin is good for the entire crypto ecosystem… And since most cryptos in the DeFi space are much smaller than bitcoin, they can see much bigger gains.

Crypto users are piling into projects for the opportunity to earn tokens and improve their yields. And projects are benefitting by seeing their liquidity and viability grow.

In DeFi, you provide liquidity and get tokens as a reward in return. It’s an entirely new way to make Tech Royalties.

The Biggest Craze Since 2017

What we’re seeing in DeFi today is a speculative mania led by the new yield-farming craze. It’s reminiscent of the initial coin offering (ICO) craze that swept the crypto market in 2017 and propelled some tiny names into well-known projects.

Ultimately, we believe yield farming will be positive. It’ll help drive the expansion of DeFi and boost the returns of Tech Royalties.

As for specific yield-farming opportunities, we’re much more cautious…

Yield farming is bringing a surge of assets to DeFi. And it’s just getting started. That’s the good part.

The downside is this: Because this space is so new, some of the yield-farming opportunities you may encounter are risky and short-lived.

So for now, we’ll watch this space as it matures. And when it’s proven to be stable and reliable, we’ll take advantage when the time is right.

But if this trend turns out to be the next Jet or ICO boom, we’ll be positioned to profit ahead of everyone else.

That’s why we’re pulling back the curtain on this opportunity early. When the pieces are in place… we’ll be ready to act. And we expect big moves coming to DeFi over the next 6-12 months.

If you do try yield farming, keep in mind that no yield is guaranteed. And generally, the larger the yield, the larger the risk. Like anything else in crypto, never invest with money you aren’t willing to lose.

As I mentioned above, this new asset class is unlike any other in history… and we expect DeFi to really take off in the coming year.

That’s why Daily editor Teeka Tiwari put together a presentation to show you how to start earning income from Tech Royalties. You can watch it right here…