Sometimes, you can’t help but be a little superstitious.

About 45 years ago, on the day I was born, someone gave my mom a plant. By some miracle, that plant is still alive today. My mom still takes care of it. She even calls it “Jason.”

And the funny thing is, she swears that there’s a connection between me and that plant. When I get sick, it loses leaves. When I’m having a good week, it gets lush.

In fact, just recently I talked to her on the phone and told her I was having a rough week. A few days later, she called me again and asked how I was doing. I told her things were looking up and I was doing much better than before.

Then, she sent me a picture of the other Jason in a new pot. “The roots were compacted when you called me,” she said, “but now, you’re blooming a new flower.”

Look, maybe there’s a connection between this plant and me. Maybe it’s all just a coincidence. But in this case, I switch off the analytical side of my brain and accept the fact that the answer may not have any real explanation.

A lot of people take this same approach to the market – especially when it appears to make no sense. They trade off of feeling. They may dress it up as “intuition” or “instinct,” but those are just fancy words for “superstition.”

And that’s exactly how you trade yourself right out of the market.

I may have some superstitions in my life outside investing… but when it comes to stocks, I don’t rely on my gut. I become a man of science and turn to the hard data to guide my decisions.

And as I’ll show you today, this data can tell us what’s going on with the market right now…

I can understand why the market may seem irrational. The pandemic is still a real threat. Violence is erupting in places like Portland and Wisconsin. And that’s not even mentioning the presidential election on the horizon.

But thanks to my nearly two decades on Wall Street, I know that the market isn’t irrational. It just seems that way because most people can’t see what’s really driving it underneath the surface.

And that hidden force is the big money.

I’m talking about the asset managers and hedge funds that make multibillion-dollar trades every day. These institutions wield so much leverage that they are the engine that drives the market higher or lower.

But the big money likes to keep their moves hidden from the average investor. So most people end up thinking the market doesn’t make any sense.

That’s why I developed my “unbeatable” stock-picking system to sniff them out. Regular readers know it scans nearly 5,500 stocks every day and ranks them for strength using algorithms. But it also looks at the big-money buying and selling in the broad market, using the Big-Money Index (BMI).

And this is what’s it’s signaling to us right now: 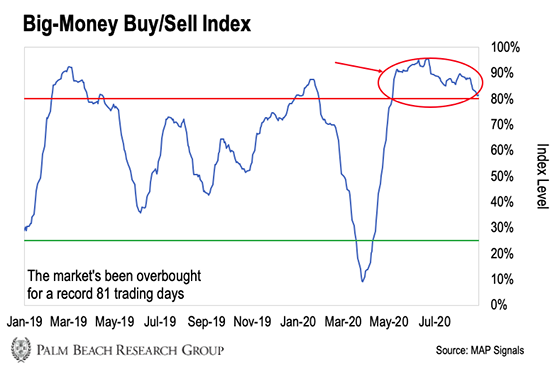 As you can see, we’re 82% overbought. And as I’ve mentioned before, overbought period has lasted for a record period of time – now 81 trading days.

And over the past few days, it seemed like it might finally end soon. After all, the market has to pull back at some point, right?

The answer is yes. But it doesn’t have to be tomorrow, next week, or even next month.

Despite a falling BMI, when I look closer at my data, it indicates the market is preparing to surge higher again. 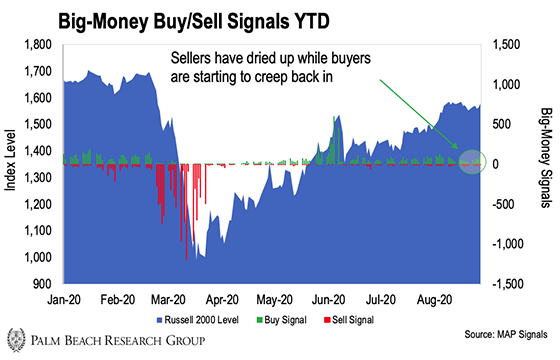 It’s clear there’s been hardly any selling since April. And not only that, but the green bars at the far right are starting to grow larger.

If selling evaporates and buying surges, the BMI – and the market as a whole – will start to rise again.

But what specifically is the big money buying?

A few select sectors have been rallying. Tech has started to see notable buying again, along with staples and industrials.

But the big winners this past week were discretionary stocks. 44% of the sector saw big-money buy signals. It seems that as we draw closer to the promise of a vaccine and a return to normal life, “real-world” stocks are getting some attention again after being written off for dead in March.

If you’re looking to be aggressive and take advantage of this move, look at the Consumer Discretionary Select Sector SPDR Fund (XLY). It’s an exchange-traded fund that holds a basket of discretionary stocks, and it should rise higher if it keeps the big-money momentum.

Look, based on instinct alone, you might be anticipating an imminent pullback. But I don’t let superstitious thinking cloud my judgment when it comes to investing. I look at the data. And it’s saying that the big money is still moving into stocks. So should you.

P.S. My system doesn’t just track the market by sector. It can identify individual stocks that are seeing big-money buying. So we can buy them before Wall Street’s moves send them soaring.

It’s already found multiple triple-digit winners for my Palm Beach Trader readers, like The Trade Desk (TTD), which is up 443%… and SolarEdge Technologies (SEDG), which is up 282%.

So if you want to profit from this unprecedented rally, there’s no better way than using my unbeatable system. I’ll tell you more about it right here.