Since June, I’ve been telling you the market is overheated and due for a pullback…

As you already know, big money has been the prevailing force in driving stock prices higher.

But no rally lasts forever. And I hope you’ve been preparing yourself like I told you to… Because we’re finally seeing the sell-off I predicted.

The market rebounded slightly today… And that’s expected after so much selling in a short period. But based on my data, there’s still plenty of downside to go.

Now, the question you’re probably asking yourself (or more likely asking me) is: How much further will the market drop?

Today, I’ll tell you what my system is saying… and how we’ll play it.

What the Big Money Says About This Selloff

To take the temperature of the market, I created my own “unbeatable” stock-picking system. It scans nearly 5,500 stocks each day. And it uses algorithms to rank each one for strength.

But my system does more than just look at individual stocks. It also looks at the big-money buying and selling in the broad market through the Big-Money Index (BMI).

And here’s what it’s telling us right now:

Currently, the BMI is below 80 and trending downward out of overbought territory. That means sellers are starting to gain control.

With last week’s selloffs, we finally fell out of overbought conditions.

This tells me we’ve seen peak buying for this cycle… And the BMI will head closer to the mean (around 50%) in the coming weeks.

Once it does, that’ll be the time to go shopping for outlier stocks at cheaper prices. But when exactly will that be?

How Long Will the Sell-Off Last?

Now, I don’t have a crystal ball. But I do trust in my data. And it’s generally steered me in the right direction.

That being said, how long will this pullback last? Let’s dig into the numbers.

Take a look at the chart below. It shows the volume of big-money buying and selling in exchange-traded funds (ETFs) since January 2018. 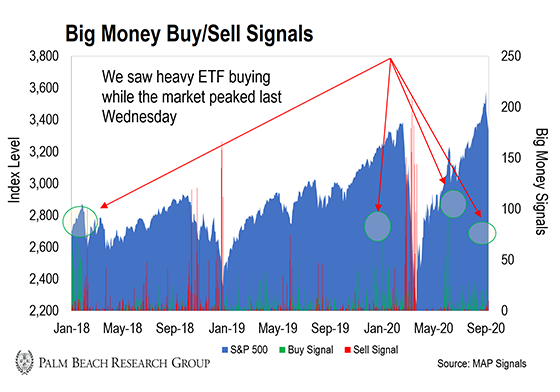 ETFs offer broad exposure to the market. So big-money buying and selling activity in ETFs is a strong proxy for the market’s movements.

Last Wednesday, we saw over 70 ETF buy signals. Over the past 30 years, there have only been 10 trading days with 70 or more.

That means we likely hit a market peak last week. So the data suggests lower prices are ahead.

Now, to see how long this sell-off could last… I crunched the numbers even more.

I looked at all 10 times there were 70 or more big money ETF buys signals in a single day. And what I found is the forward returns were negative for 1–3 months. After that, returns are neutral to positive.

So the data tells me we may be due for some pain in the short-to-intermediate term. However, I don’t see this as the beginning of a prolonged bear market… It’s just a cooling-off period after the record rally we had since the March lows.

Regardless, this selloff was a much-needed correction. It’s healthy for stocks to cool off after such a massive run up.

Plus, it gives us a chance to buy outlier stocks – the elite of the elite – at discounts.

Remember, outliers are stocks that can return 10x, 100x, even 1,000x on your investments – companies like Amazon, Netflix, and Tesla. You want to own companies like these regardless of market conditions.

So think of this correction as a “fire sale” for outlier stocks… rather than a harbinger of doom.

If you’ve been waiting on the sidelines during this epic buying spree… pat yourself on the back. You should have plenty of dry powder to strike on outliers at cheaper prices once they find their bottoms.

And if you want to be even more cautious, consider “scaling in” on outliers.

For instance, instead of buying an entire outlier position at once… you can buy just a half or a third. That way, if the price falls, you can buy more of the position later at a cheaper price and lower your cost basis.

P.S. Market corrections like these are the most exciting time for me and my Palm Beach Trader subscribers…

Because it’s time to go shopping for the highest-potential outlier stocks at fire-sale prices.

My big-money system has already found five stocks that doubled in value (at least), often in under a year. And I’ve got my eye on a few that could be the next multi-bagger winners…

My system works so well because it cuts out the emotion and “white noise” of the market. It dials in on where the big money is placing their bets… and discovers stocks before they race higher. Find out more here.