Whenever I tell people what I do for a living, one question pops up more than any other:

“Why did ABC stock go up or down this week?”

When a stock makes a big move up or down, people need a reason why. They want to hear things like, “The company just announced it’s developing a national communications network!” or, “The CEO just said she’s stepping down at the end of the month.”

And that “someone” is the big money.

This is hard for people to accept because the big money – meaning pension funds, hedge funds, and asset managers – are not as visible as the other reasons. And it’s against human nature to immediately accept that there may not be an observable reason for prices to do what they do.

But these big-money investors are the true movers of stocks.

Now, that doesn’t mean retail investors should forget about stocks. In fact, if you know how to tap into these strategies, you have much better odds of outperforming the market.

That’s why I spent decades of my life building a system that tracks the flow of big money. I designed it to tip us off on which moves the big money is making behind the scenes, so we can profit along with them.

And below, I’ll share what it’s telling us right now…

The first thing you have to understand about the big money is that they don’t buy and sell a few shares at a time, like you or me. They like to buy or sell massive amounts of shares.

That can drive the price to extremes in a short period of time. So with this setup, the big money has two options:

Which would you rather do?

The drawback with option 1 is the big-money buyer is competing against itself. Once the market knows there’s a big buyer, everyone else leaps in to buy shares, too. By not being discrete, the big buyer has ruined their own setup.

Therefore, option 2 is much better. The big money can buy shares over a longer period of time and wait until the bulk of their order is complete before letting the cat out of the bag.

Once the news gets out, everyone else rushes in to buy the stock as well. This of course pushes prices in the big money’s favor, and since they already own plenty of shares, they reap the rewards.

So it’s crucial to buy right when the big money starts buying but while it’s still trying to keep it quiet. And that’s exactly what my system enables us to do.

Regular readers know it scans nearly 5,500 stocks every day and ranks them for strength using algorithms. But it also looks at the big-money buying and selling in the broad market, using the Big-Money Index (BMI).

Here’s what the data is saying right now: 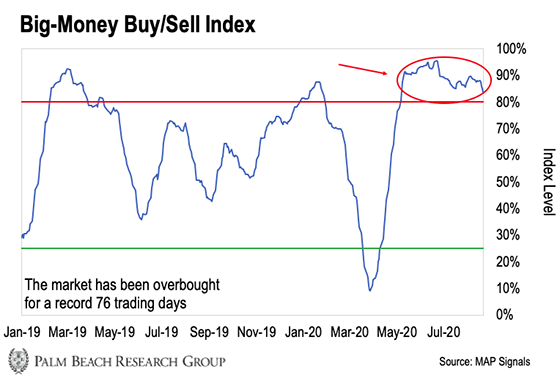 The BMI tells us that the market is 84% overbought. And it’s been overbought for a record 76 trading days. So while the market is overheated, big money is still piling into stocks.

But if we drill down into this data even more, we can get a clearer picture of where the big money is placing its bets…

What the Big Money’s Buying Now

The big money also tends to move in herds. This is why I look at which sectors are attracting capital.

These rotations help us identify which sectors lead and lag, so we can zero in on the top stocks in the winning sectors.

Take a look at the breakdown of sectors in the table below: 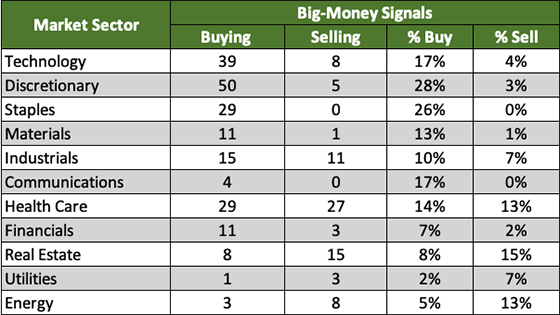 Last week, the top sectors attracting big money were discretionary and staples, based on the percentage of big-money buying and selling.

Tech and health care were close. While they saw plenty of buying signals, they were nowhere near the frothy buying levels we saw in prior months. Plus, health care saw the only notable selling last week.

It’s all about putting the odds in your favor. By getting the inside scoop on what moves the big money is making, we can position ourselves ahead of time to profit alongside them.

If you’re looking to take advantage, consider the Consumer Discretionary Select Sector SPDR Fund (XLY). It’s an exchange-traded fund that has strong exposure to discretionary stocks, which means it will rise as big money rotates into that sector.

Just remember, never invest more than you can afford to lose.

P.S. Don’t forget: My system can do more than just pick out the big money’s movements in broad sectors. It can identify the individual stocks that Wall Street is scooping up as well… before they begin to rocket higher.

It’s nabbed triple-digit winners for my Palm Beach Trader readers like The Trade Desk, Nvidia, and Veeva Systems. And it’s already sending us signals on the next batch of top stocks to own. You can find out more about how we tap into Wall Street’s strategies by going right here.