Chasing money dominates much of life. In a perfect world, love and purpose would be all we need. But the fact remains, they don’t pay bills. Only money does.

But why are people so fascinated by the big money in magazines… but not in stocks?

Stock news focuses on products, trends, and stories. And that sure seems like a market mover. But the big money – the real forces behind market moves – is conspicuously absent from the headlines.

As regular readers know, big money is all I focus on. Years ago, after handling an order to buy more than $600 million worth of stock, I saw its power firsthand.

The stock had terrible fundamentals and prospects, but went up 70% in a month. Of course it did – I was buying on behalf of a multi-billion-dollar money manager.

That’s why, especially in uncertain times like now, it’s vital to look at what big-money investors are doing with their money.

Today we’ll do just that… and provide some clarity to the mixed messages the market is sending.

Big-Money Clarity to a Wild Week

Last week was a wild one for news. The first presidential debate was unconventional to say the least. Regardless, buyers came fast and hard to start the week, and price chopped around as the week went on.

Then came Friday. On the back of news that President Donald Trump, the First Lady, and members of his cabinet tested positive for COVID-19, Friday looked set to be a day of destruction in stock prices.

It’s sensible to think that if a sitting president catches the virus dominating our lives and hamstringing the economy, then stocks should take an ugly beating. But the fact is, it just wasn’t that bad. The S&P 500 fell less than 1%. The Dow was briefly positive intraday before closing 0.5% lower, and the small-cap Russell 2000 index even finished the day up 0.53%.

It’s important to note, however, the NASDAQ’s close on Friday was only slightly lower than Tuesday’s close of 11,085… And 4.1% higher than the most recent low on September 23.

So, it would appear that buyers are actually coming back. And the market’s acting surprisingly resilient against dire news.

But, this is an election year. And history suggests last week’s strength might be short-lived. Octobers are positive months on average, but election Octobers are anything but. Since 1990, October election years have averaged an S&P 500 return of -2.5%.

But instead of just looking at returns, let’s focus on the big money…

Below is our Big Money Buy/Sell Index. Using my proprietary data, refined over 20 years of research, it measures likely buying and selling of big-money investors. It’s simple… Sellers are in control when the yellow line falls. If it rises, buyers lead.

It’s clearly been falling for well over a month… 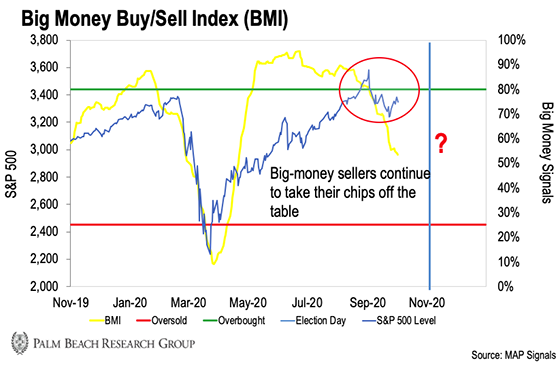 But, as I’ve been showing you, that’s what tends to happen leading up to election day.

In every election since 1990, the BMI has fallen ahead of the election, and risen again shortly thereafter. That’s regardless of the winner.

It makes sense… If you managed billions of dollars, you’d likely want to bet on sure things. Big-money investors don’t want to risk the unknown.

The Best Bet to Make This Month

So what’s to come for this election? We won’t know until it’s over, but we see the theme of pre-election selling already underway…

The current setup is just like prior election years. Big money is taking some chips off the table heading into the unknown. If history is any guide, the buyers will likely show up right around Election Day… usually shortly after.

That tells me, in spite of the recent strength, investors should expect more ups and downs until election day. But the coming dips should be short-lived.

No matter what news comes out from the financial mainstream news, the big money is basically shouting at us to heed this advice.

Start making a shopping list of outlier stocks to buy on sale, and be ready to pull the trigger when those dips arrive.