Michael Jordan was one of the greatest basketball players ever – even when he was on a terrible team.

Most people remember Jordan from when he played for the Chicago Bulls. And for good reason. That team was incredible, winning six NBA championships over eight years.

But toward the end of his career, Jordan played for the Washington Wizards. That team wasn’t as spectacular as the Bulls, to say the least. In fact, it was awful. Their record was 37-45 for two straight seasons, and they didn’t make the playoffs in either one.

But here’s the thing: Even though his team was terrible and he was much older, Jordan still played like an all-star. In 2001, he set a record for the oldest player to score 50 points in a game, at age 38.

Great players survive and thrive over long periods, no matter what’s going on around them. And the same is true of great stocks.

The best stocks can carry you through the most volatile markets, like the one we’re seeing today. When you hold them, you don’t need to focus on nailing the tops and bottoms.

Believe me, I get it. It’s frustrating to watch a market that seems disconnected from reality. Prices go up one day and down the next, while coronavirus cases continue to rise and people keep losing jobs.

But by focusing on these “outlier” stocks, you don’t have to stress about market volatility. You see, history shows that outliers will outperform over the long run, regardless of market conditions.

And I’ll prove it to you today…

At one point in my career, I began to notice that only a handful of stocks kept going higher and higher, no matter what the market threw their way. Day after day, I kept seeing the same leaders at the top of the charts.

I realized that awesome stocks are unstoppable. So I should just focus on them.

Eventually, I developed my “unbeatable” stock-picking system to find these companies for me. Regular readers know it tracks big-money buying and selling in the broad market. But it also scans more than 5,500 individual stocks every time, looking for outliers.

And it’s proven effective at identifying the “all-star” stocks that crush the competition over a long stretch of time – just like Jordan crushed his competition.

Take a look. The green lines represent the big-money buy signals that my system picked up on. 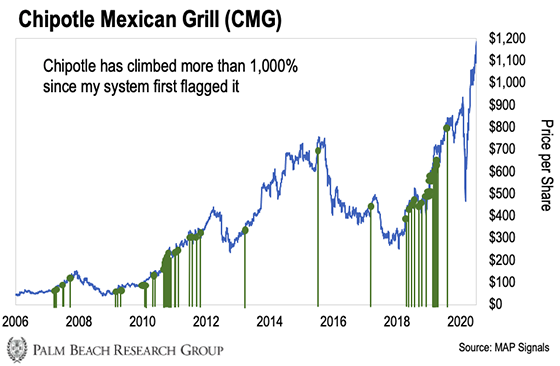 Now, the journey had plenty of peaks and valleys. Nothing goes straight up. The point is, you have to be patient and disciplined through the volatile times.

Another example is PayPal Holdings (PYPL).

But PayPal didn’t go in a straight line, either, as you can see from its huge drop after the COVID-19 outbreak. 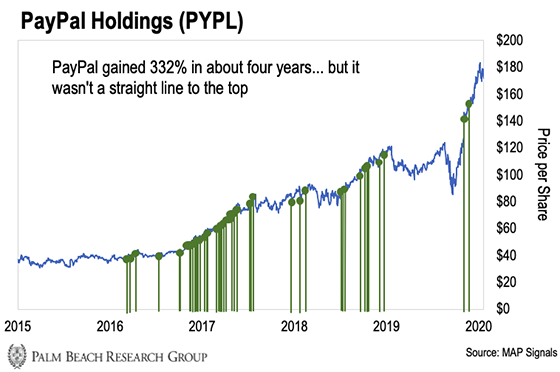 Google (now Alphabet) is another outlier. My system first flagged it back in 2006, at $220. Like the other two stocks, its ride to the top wasn’t smooth. 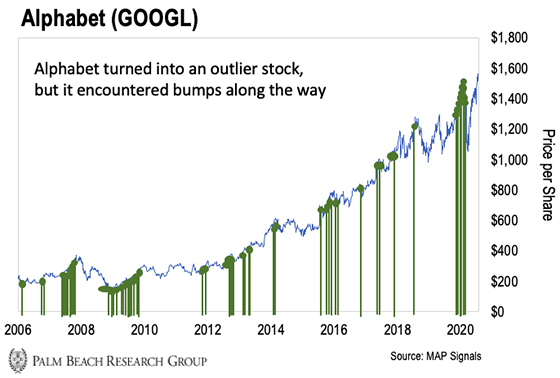 If you’re serious about making money, you’ll want to own outlier stocks. According to one study, over the past 100 years, just 4% of stocks have accounted for nearly all the profits of the market each year.

So these outliers are where the big money is hiding out. And if you’re not targeting these companies, you’re basically wasting your time as an investor.

Look, all stocks go through pain points. But if you can weather the tough times, then the great stocks can deliver immense gains after you come through the other side.

Bottom line: You don’t have to always be winning on every investment. A few outliers make all the difference. But they require patience.

Remember, even when Michael Jordan was on a bad team, he outperformed everyone else. People bet on him scoring 20 points per game, and they won more often than not. They didn’t care whether the Wizards were winning or losing.

They bet on the player, not the team.

We’ll do the same by betting on outliers. We don’t have to sweat the ups and downs because we own all-star companies.

P.S. In my Palm Beach Trader service, my subscribers own some of the best outliers in the market right now, including multiple triple-digit winners like The Trade Desk, Nvidia, and SolarEdge Technologies.

And right now, my system is flashing green on the next crop of outliers…

So don’t miss out on the next wave of big-money gains. To learn how you can take advantage, just watch this special presentation on my system right here.