We’re in the greatest bull market in history. At nearly 11 years old, it’s the longest bull run ever.

Now, some people believe we’re due for a crash. But they’re wrong.

I can tell you with authority, it’s only going to get better. In fact, the market just got an additional boost to keep rocketing higher…

Last week, the White House leaked a proposal of tax cuts that would incentivize Americans to invest in stocks.

Under the plan, a portion of household income would be treated as tax-free for investing outside a traditional 401(k). For example, a household earning up to $200,000 could invest $10,000 of that income on a tax-free basis.

You see, a recession is the only thing likely to prevent President Trump from winning another four years in the White House. So he’s trying to pull out all the stops to keep the stock market chugging higher.

And in my entire Wall Street career, I haven’t seen anything so incredibly bullish for stocks…

But here’s the thing: Even if this new proposal doesn’t pass, this epic bull run still has plenty of runway in front of it.

And today, I’ll share three reasons why. Once you read them, you’ll see that it’d be a mistake not to invest in stocks right now…

I don’t make crystal-ball predictions. I look at data and let that guide me. And the data is indisputable. Over the last century, the market has continued to climb higher… 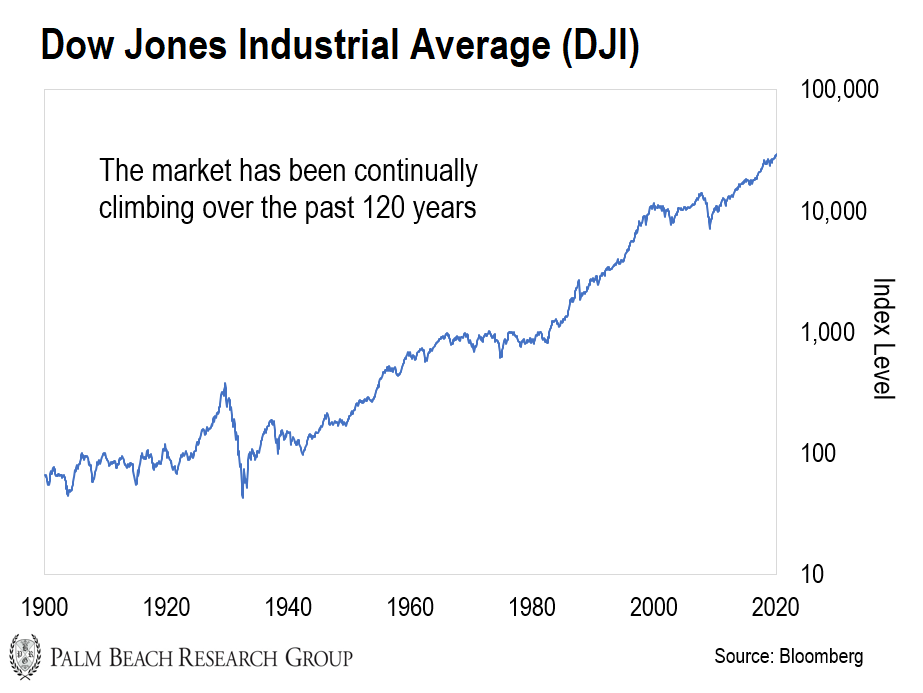 In fact, stocks have outperformed U.S. Treasuries, gold, and nearly every other asset class over the last 100 years.

Until I see otherwise – which likely won’t happen in my lifetime – history proves the highest likelihood of making money over time is in the stock market.

Throw in President Trump’s new possible tax incentives for ordinary Americans to buy stocks, and it’s a no-brainer. The market will climb even higher.

Of course, past performance doesn’t necessarily guarantee future results. So I need to see more.

That brings me to…

When interest rates are low (like they are now), you earn nothing on bonds or your savings accounts. So you have to look elsewhere for income.

And the hunt for income is really on right now, since rates will likely remain historically low in 2020. Here’s why that’s important…

And that doesn’t even account for taxes, which makes holding stocks even more attractive than bonds.

Dividends are taxed at 23.8% (long-term capital gains). But bond income is taxed as ordinary income – which has a maximum federal tax rate of 40.8%.

So if you’re an investor looking for income, you can see in the table below that you’d end up with more money in your pocket with stocks at current yields…

When it comes to paying taxes on your investments, stocks are clearly the better place to be.

And if you add in the tax incentives the White House is proposing, why would you buy anything else?

Reason No. 3: The Market Is Still Strong

Finally, the market is much more robust than the negative headlines suggest. While investors are panicking over coronavirus news, companies are still showing stellar growth.

These are all bullish signs for the market going forward. And if we look at broader metrics of the U.S. economy, they’re chugging along, too…

For instance, unemployment is at 3.6%. That’s near its 50-year low… and the lowest level in my lifetime. And wages are up 3.1% over the past year.

So it’s hard to find a reason to be bearish with numbers like these.

Stay the Course for Profits Ahead

Now, nothing goes up in a straight line. We’ve seen some volatility to start the year…

After my stock-picking system’s data signaled overbought market conditions late last year, we saw the pullback I predicted. The S&P 500, Dow Jones, and Russell 2000 all saw drops between 3% and 6% in January – before bouncing back this month.

And with fearmongering headlines still in the mix, expect more zigzagging ahead. Just remember, it’s normal.

We simply have to focus on the big-picture market trend. And history is telling us that it’s still headed upwards in the years ahead.

That works out to average gains of over 10% per year – more than enough to weather inflation and volatility… and grow your principal. Plus, President Trump’s latest tax cut proposal incentives could easily add more to that bottom line.

So consider buying an index fund like the SPDR S&P 500 ETF Trust (SPY) – and don’t touch it for the next 30 years. As the market climbs higher, you’ll be glad you did.

P.S. Buying an index fund is a good strategy to match the market’s solid returns. But to beat the market, you simply have to buy the right stocks.

You see, a 2017 study found that over the past 100 years, just 4% of stocks have accounted for nearly all of the market’s profits. I call them outliers. And if you’re serious about making real money much faster, they’re the stocks you want to buy.

That’s why I put together a special report called Outliers: How to Build a Legacy of Wealth by Identifying Tomorrow’s Biggest Stock Market Winners, Today.

It’ll show you how to find these superstar companies with the potential to grow 1,000% to 10,000%… and how to identify them before anyone else.

Plus, you’ll get my 10x guarantee: If my system doesn’t hit its goal, I’ll reach into my own pocket and buy you another year of my Palm Beach Trader advisory. Click here to learn more.