The fast-casual diner has made truckloads of profits for investors by selling oversized burritos to hungry customers.

Sure, it’s had some major obstacles over the past few years. For instance, four years ago, its stock took a beating due to food safety concerns.

But the company has done everything right since then.

A beefed-up marketing campaign and new leadership have rocketed Chipotle back to record highs. Now, it’s crushing earnings and growing like mad.

It’s exactly the type of outlier my unbeatable stock-picking system looks for. (In fact, my system first identified CMG in May 2007. It’s up 835% since then.)

Yet, last week, the stock nose-dived on no news… 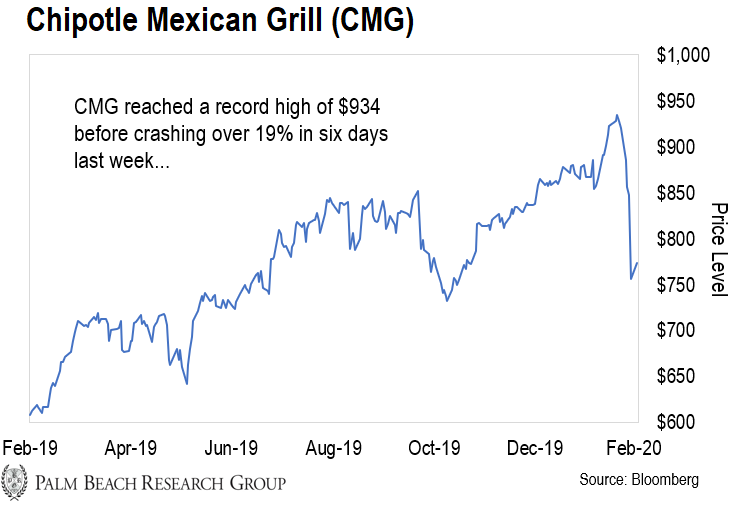 So what’s behind this massive sell-off in one of the best companies in the country?

Fear. Specifically, fear the coronavirus will become a global pandemic.

Now, Chipotle isn’t the only great company brought down by last week’s massive sell-off – plenty of other high-quality stocks have plunged, too.

The chart above just illustrates how fear-induced selling can take down even the best companies. But like cream, the good companies will rise to the top again.

And today, I’ll tell you they’re setting up for a strong rally…

The S&P 500 plunged 11.5% last week… largely off of negative headlines. I know it’s scary and feels terrible – like a deer caught in headlights.

But I did warn you a market pullback was coming. And in my Palm Beach Trader service, we’ve been taking profits, raising cash, and trimming risk.

Of course, no one could have predicted fears of a global pandemic would grip the market like they have. But as I’ve said before, this panic is overblown.

These numbers look scary… but as a numbers guy, I like to put them in perspective.

According to the CDC, more than 18,000 Americans alone have died from the flu this season. And at least 32 million have been infected. Overall, the World Health Organization estimates that the flu kills up to 650,000 people per year worldwide.

So your chances of dying from the flu are much higher than they are from the coronavirus (which is a respiratory illness similar to the flu).

Look, I understand. This outbreak is serious. So I don’t want to minimize the pain and suffering. It’s real.

But as investors, we must ask ourselves this question: Does the coronavirus outbreak make a business selling burritos worth 20% less today than it was last week?

The answer is: Of course not.

Everything is getting punished in this fear-driven sell-off. But we saw a similar panic from October 2018 to December 2018 when the market dropped nearly 20% during the height of trade war fears.

Here’s what I said then:

We’re just experiencing a little pause in a bull market right now. It feels like a huge drawdown, but if you were to look at a chart of the S&P 500 from the bottom of the bear market in 2009 to now, this pullback would barely register as a blip in that chart. It’s very minor in the grand scheme of the market. And my data says we’re going higher.

If you’ve been following me, you know my system doesn’t only identify which stocks the big money is buying. It also tracks what it’s doing in the broad market.

So what is it saying now?

As you can see below, the index is indicating that selling is taking over… 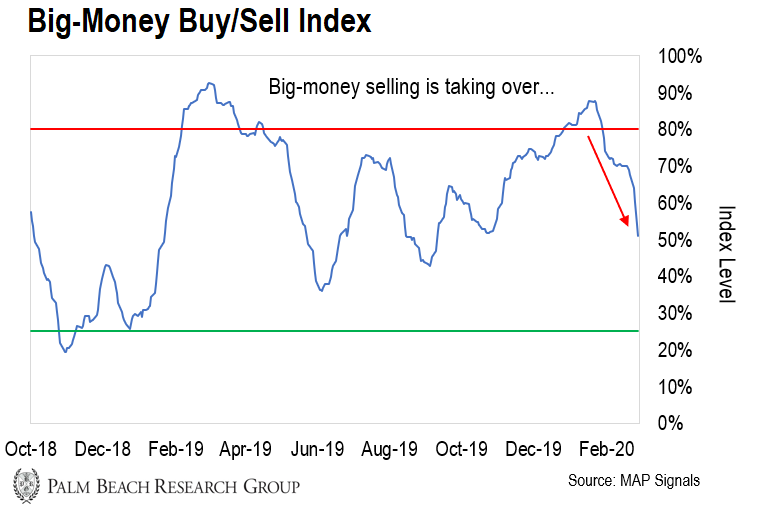 When the ratio is at 80% (see the red line above) or more, it means buyers are in control and markets are overbought. And when it dips to 25% (the green line) or lower, sellers have taken the reins, leading the markets into oversold territory.

Although we’re not near oversold levels yet, the index is trending lower – which means lower prices are ahead.

But here’s the good news…

I crunched the numbers and this level of selling has happened 27 times since 1990.

Market troughs came an average of three weeks later. And forward returns were huge for all of them.

For instance, the average six-month return after these sell-offs was 14.5%… while the average one-year return was 21.6%.

So use this fear-induced selling to scoop up high-quality companies at big discounts. When fear dissipates, they’ll gun higher again.

P.S. My stock-picking system recently pinpointed SolarEdge Technologies (SEDG) as an outlier for my Palm Beach Trader subscribers. And just last month, we took 111% gains off the table as dry powder to buy our next triple-digit winners.

As I mentioned, this market pullback is handing us a chance to buy these great companies at a discount. And my system can help you spot them, too – just like it did with SEDG.

To find out how it spots big-money investors piling into the best stocks – and how you can ride them to profits just like my subscribers – check it out right here.