The market’s been sick for a while now… and yesterday, it finally showed the first visible symptoms.

We saw all the major indices decline. The S&P 500 fell 3.5%… the Dow fell 2.8%… and the tech-heavy Nasdaq dropped 5%. And the bleeding continued today… with all three major indices in the red for the second day in a row.

While most people were caught off guard by Thursday’s sell-off, I wasn’t. The market’s been overbought for so long it finally developed a fever… and this pullback is how it has to cure itself.

But instead of panicking, we’re looking at the hard numbers and letting them tell us what to do next. We avoid trading with emotions that might shake us out of profitable positions.

So below, I’ll go over the market’s hidden “symptoms” that told us this sell-off was coming… and what our next move will be…

On days like yesterday, when big sell-offs hit the market, it can be easy to let your emotions get the best of you.

That’s why I rely on data to guide my decisions when it comes to investing. It takes the emotions out of the process. And when market behaviors start to become more extreme, it’s a strategy that keeps you levelheaded.

This gameplan led me to create my “unbeatable” stock-picking system. It scans nearly 5,500 stocks each day. It uses algorithms to rank each one for strength.

And to make sure it’s highly accurate, comprehensive, and effective, I used my experience from nearly two decades at prestigious Wall Street firms – regularly trading more than $1 billion worth of stock for major clients.

I refer to these types of firms as the big money – because their actions are what really move the market.

But my system does more than just look at individual stocks. It also looks at the big-money buying and selling in the broad market using the Big-Money Index (BMI).

When the BMI dips to 25% (the green line in the chart) or lower, sellers have taken the reins, leading the markets into oversold territory. And when it hits 80% (the red line) or more, it means buyers are in control and markets are overbought.

And here’s what the data is showing us now: 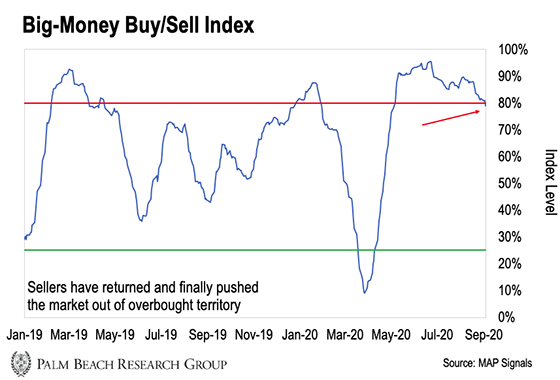 Now, as I’ve said before, the market’s been overbought for a record 84 days, the longest overbought period in the 30 years I’ve been tracking this data.

And as of Thursday, we’re no longer overbought.

It looks like the big money is starting to slow down… and sellers are starting to reassert control. So we can expect lower prices at least in the near term.

Get Ready for Bargains

I’ve mentioned before that while we’ve seen big money starting to hit the brakes the past few months, there were no sellers to exert any downward pressure. So stocks kept rising.

Now, it appears the sellers have finally come back.

We were adjusting our strategy before this downturn reared its head. Yesterday, tech stocks got walloped… not long after I said that the big money was rotating out of that sector.

But rather than let this pullback scare us away from profits, we’re just preparing to scoop up great stocks at a discount.

Right now, we need to let this action play out a little more. The past few months, every market dip has been a temporary speed bump that precedes the market ripping higher. So we need a little more data before we decide it’s time to make a move.

In the meantime, prepare to take profits on some of your winners if you need dry powder. This could be a big buying opportunity for quality stocks that just got a little cheaper.

Just remember not to let your emotions get the better of you, even if this pullback becomes more intense. Instead, look at it as a buying opportunity. We’ll scoop up the best stocks at discounts… and ride them to new highs when big-money buying returns.

P.S. This is where my system shines. It’s already flagged the next winners set to soar. If stocks sink further, we’ll be ready to pick them up at bargain prices.

That’s how we bagged triple-digit gains from The Trade Desk (TTD)… SolarEdge Technologies (SEDG)… and Paycom Software (PAYC). Even after taking our initial capital off the table, we’re up an average of 188% on all three.

So don’t miss out on the next wave of big-money gains. You can join us right here.