When it comes to investing, the thing many people get wrong is perspective. Most investors are happy to take $100 now, not knowing it could be $500 with a little patience.

Bobby Bonilla got it right.

From 1988-91, Bonilla was one of the best players in Major League Baseball. He was a six-time All-Star and won three Silver Slugger awards.

But in 1999, while he was playing for the New York Mets, Bonilla’s career started to fizzle. And the Mets decided to buy out the remaining $5.9 million on his contract. Instead of a one-shot deal, though, the team chose to make annual payments of nearly $1.2 million for 25 years starting July 1, 2011 – including a negotiated 8% interest.

This was an extremely lucrative deal for Bonilla. Every July 1, the Mets pay him $1.2 million. And they’ll continue to do so until 2035, when he’ll be 72. In total, he’ll make $29.8 million – five times what he would’ve made with a quick and dirty buyout…

That’s why in New York, July 1 is known as “Bobby Bonilla Day.”

Of course, not all of us have a team owner to hand us million-dollar checks every year….

But the reason Bonilla’s checks grew so much each year was because he understood the magic of compounding. And every serious investor should understand it too.

Today, I’ll show you how it works… and how it can make a massive difference in your retirement.

The Eighth Wonder of the World

Albert Einstein called compounding the “eighth wonder of the world.” Warren Buffett says it’s one reason he was able to amass such a huge fortune.

The key to compounding is to let it work over many years. As the balance of an account grows, the interest rate begins to pay out more and more. Soon enough, that growth rate goes exponential.

I call this the “hockey stick” chart because the money grows slowly for several decades, then really picks up speed after about 40 years. 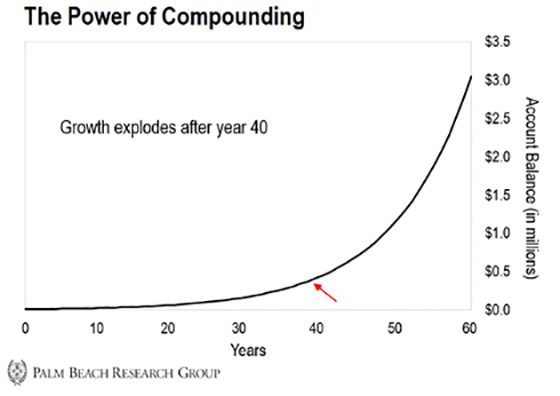 Here’s the hard part… You have to leave that money alone. The power of compounding is most effective when you let it work over many decades.

That’s why Bonilla’s smaller payments will more than quintuple over the life of his deal. He’ll be $24 million richer for sitting on his hands and waiting.

The best way I’ve found to compound your money is by buying dividend-paying stocks and reinvesting the dividends.

But not just any dividend-payer will do. There’s a special class I look for…

The Cream of the Crop

The data is indisputable. Over the last century, the market has continued to climb higher. And that’s despite crashes, wars, and pandemics. 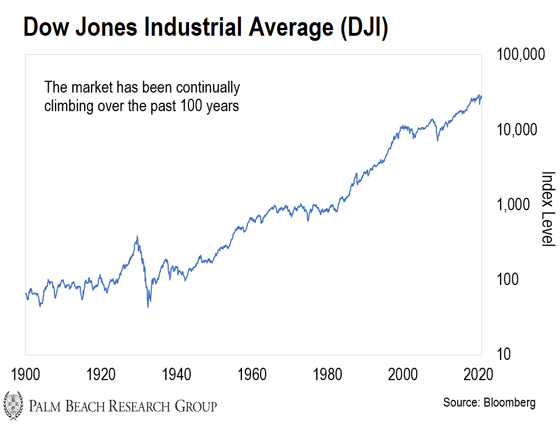 A 2017 study by an Arizona State University finance professor found that – over the past 100 years – just 4% of stocks have accounted for nearly all the market’s profits each year.

Now, I call these stocks outliers. These companies are unique in their business, grow sales and earnings at high rates, and have big profit margins.

And if you’re serious about making money, they’re the stocks you want to hold for the long term.

Outlier stocks are the best of the best. And superior selection means the difference between average returns and an outlier return.

Take Home Depot and Microsoft, for example. These are two of the greatest outliers of all time.

Now, let’s say you bought them both in 1995. Here’s a comparison of what would have happened had you reinvested the dividends or chosen not to reinvest them, over a 25-year period.

That’s the power of compounding outliers…

Now, it takes a while for the magic of compounding to kick in. But as you can see in the examples above, it’s worth the wait.

So here’s my simple strategy for building wealth in the markets: Buy outlier stocks… reinvest the dividends… and let patience be your friend.

P.S. This all begs the question… How can you find these outlier stocks?

Fortunately, I’ve taken the time and money to develop my own proprietary system for identifying cream-of-the-crop stocks. The market’s profits are largely driven by only 4% of stocks… and my system scans around 5,500 stocks for these powder kegs and signals when to buy.

Take a look at The Trade Desk (TTD), our all-star holding in Palm Beach Trader. When I first recommended buying TTD, it was less than $100 per share. At writing, it’s around $704.

That means those who got in right when my system flagged it are sitting on nearly a 700% gain.

To learn how we find stocks like this one… and how to add them to your portfolio… just click here.