If there’s one thing I’ve learned about the markets, it’s that you can’t fight the flow.

Think of the market’s ups and downs like the changing current of a river. If you attempt to go against the current, you’ll lose every time. You have to pay attention to where it’s pushing you and adapt your next moves accordingly.

The market is the same way. Once you figure out which way the momentum is going, you can follow it to profits.

The thing is, most people can’t figure out where that momentum is headed. That’s why I tap into the market’s flow using my system, which can tell us which direction the market is going next.

And today, I’ll tell you about where the market’s current is pushing us… and the strategy we can use to take advantage…

Longtime readers know I don’t pay attention to mainstream news headlines to determine what the market might do next.

Instead, I use my “unbeatable” stock-picking system to track big-money movements in the market. You see, big-money is the engine that powers up to 90% of the market’s big moves. So if you’re not watching it, you’re wasting your time.

Now, my system scans nearly 5,500 stocks each day, and it uses algorithms to rank each one for strength.

But my system does more than just look at individual stocks. It also looks at the big-money buying and selling in the broad market through its Big-Money Index (BMI).

And here’s what its data looks like right now… 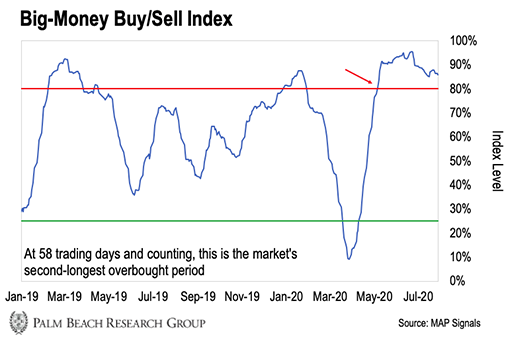 We’ve been in overbought territory since May 6 – a total of 58 trading days. Since I started using this system to track big-money moves, the longest overbought period I’ve seen is 65 days.

I’ve been warning of an imminent pullback for weeks. And I still think we’re going to get one.

But these aren’t normal times. Every time it seems like the market’s reached the edge of the cliff, buyers swoop in and keep it from tumbling. So it’s looking more and more likely we’re going to break that overbought record before the pullback arrives.

Stocks don’t always make sense. But that doesn’t mean we should resist it. We should go with the flow, be patient, and look for opportunities based on what the data is telling us.

And right now, there are two sectors that we should be looking at…

Be Ready for the Dips

Over the past few months, I’ve told you the tech and health care sectors have led the market higher. Even when big-money was slowing down, it was still flowing into those stocks.

But that story is changing.

Both sectors appear to have peaked and are slowing down.

The chart below shows big-money buying in the tech sector, using the Technology Select Sector SPDR Fund (XLK). As you can see, after each major big-money buying peak, tech stocks came tumbling down. 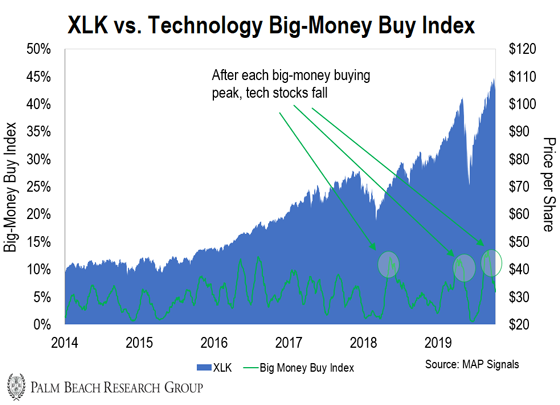 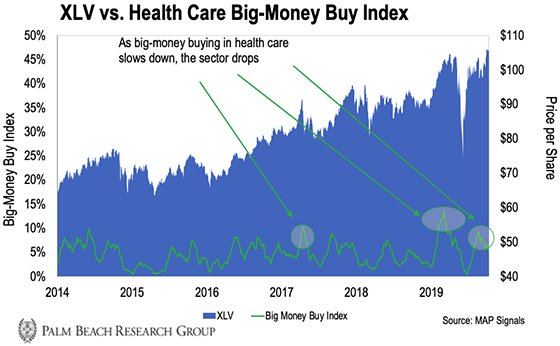 With the two leading sectors of the market starting to fall, it’d be easy to interpret this as a sign that the next pullback is almost here.

But again, I choose to follow the data. And based on what we’ve seen so far, there aren’t enough sellers in the market to push it out of overbought territory.

That means we’re likely to get some short-term dips in tech and health care before they start heading higher again with the overall market. So it’s a good buying opportunity for aggressive investors.

P.S. Because my “unbeatable” stock-picking system follows the big money, it can lead us to profits in any conditions, whether the broad market’s soaring or preparing for a pullback.

That’s why my readers are sitting on triple-digit gains like 369% from The Trade Desk… 195% from SolarEdge Technologies… and 168% from Paycom Software.

We’re only just getting started. My system is already highlighting the next triple-digit winners to add to our portfolio. You can find out more about how it works right here.