In 2001, I tried my hand at day trading. I set myself up with an account to trade currencies – specifically, the USD/GBP currency pair.

I did this for 21 days. And I lost money on 19 of them. I bought the high… sold the low… and ended up with a lot of bruises on my fists.

I had no system in place. I just went on raw emotion.

I learned an immense lesson: Trading by my gut would lead me to the poorhouse.

So I decided to build a system that would remove emotion from my trading patterns.

I spent tens of thousands of dollars to put it together. I put in thousands of manhours to ensure it worked properly. I even recruited a brain trust of Ivy League engineers to help me perfect it.

After nearly a decade of research, I finally created my unbeatable stock-picking system. And it’s been a huge success.

Since I started tracking data with my system, it’s netted my Palm Beach Trader subscribers a 68% win rate over a little more than two years. In fact, it identified 17 of the top 25 S&P 500 stocks last year.

You see, a good system is more like a GPS than a crystal ball. It can tell you where the market is headed… but not exactly when it’ll get there.

Today, I’ll tell you where we’re headed… and how to prepare for when we get there…

Heading for a Record

When you try to trade with emotions, you’re eager to make predictions. But the thing with trying to forecast the market using your gut is that you’re setting yourself up to fail.

So my system removes emotions from the equation. It focuses on the market’s data. And it scans nearly 5,500 stocks every day, using algorithms to rank each one for strength.

But it doesn’t just look at individual stocks. It also tracks big-money buying and selling in the broad market, through my Big-Money Index (BMI).

So take a look at what it’s telling us now: 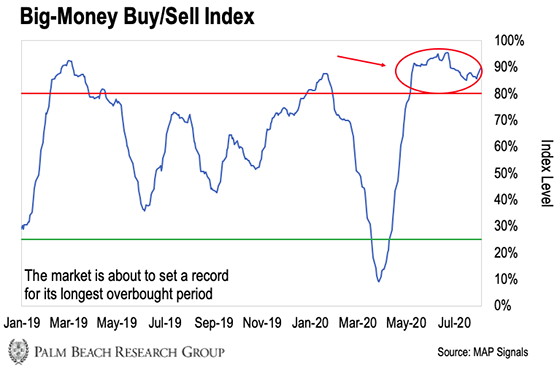 As you know, when the index hits 80% (the red line in the chart) or more, it means buyers are in control and markets are overbought. And when it dips to 25% (the green line) or lower, sellers have taken the reins, leading the markets into oversold territory.

According to the BMI, we’ve been in an overbought market since May 6 – a total of 63 trading days.

This current market has been overbought for much longer. In fact, it’s about to break the record for the longest overbought period – 65 days – since my system started tracking this data about 30 years ago.

So what’s going on?

As I’ve mentioned before, the sellers have vanished. In more than a dozen sectors that we track, selling has either flatlined or barely made any difference.

Whether big-money buying is rising or falling, if there’s no downward pressure on stocks, they’ll keep rising.

Don’t Give In to Emotions

This is one of the most important times where you have to follow the data instead of your emotions.

The market keeps rising even as the economic picture stagnates. Coronavirus cases continue to climb while the unemployment numbers tick upwards. And stocks go right along with them.

If you were to give in to the doom and gloom, you might be tempted to bet against this market.

But the data says otherwise. We’re going to break the overbought record. And while we will see a pullback, the momentum is clearly on the side of the bulls.

So for the time being, we’ll sit back and ride our winners to more profits. Instead of buying into more stocks, we’ll keep plenty of dry powder on hand for when the market does pull back.

That’s not what my gut’s telling me to do. It’s what the numbers are saying. And they’ll guide us through this overheated market.

P.S. My system’s data can truly take the emotions out of investing – and lead to profits, no matter which direction the market’s headed in next.

That’s how it identified the triple-digit winners in our Palm Beach Trader portfolio, like The Trade Desk, Veeva Systems, and Paycom Software. And it’s already zeroing in on the next batch of outliers.

That’s why I put together this special presentation to show you how it works. So be sure to check it out right here.