Right now, the market seems hopelessly irrational. We’ve gone from a 15% rise in the Nasdaq, in the span of a month, to a 10% correction with stocks chopping all over the place. All this with little change in the economic outlook.

So, if investors are already aware of the risks facing the American economy… And that didn’t matter to them in August… What’s causing the selloff we see today?

While from the surface markets almost always seem to do the opposite of what’s expected, digging into the data reveals some predictable factors that can give you an edge.

And in today’s issue, I’ll share the key dynamic that caused the most recent selloff… and what it says about the next few months.

The single biggest factor contributing to the recent selloff, and the muted recovery so far, is weak hands.

Think about it… Millions of Americans lost their jobs in March and April. Then they were suddenly enriched by $1,200 stimulus checks and expanded unemployment benefits. They watched the stock market plunge over 30%… and spotted an opportunity.

Naturally, many took to trading the markets to try to sustain their livelihoods through the pandemic – or even get rich.

And that’s not just the narrative, there’s data to back it up. CNBC found that Charles Schwab, TD Ameritrade, and E-Ttrade saw an average 125% increase in new account openings in April from the previous year. That’s nothing to say of the reported millions who flocked to trading apps like Robinhood.

It became a kind of cultural phenomenon. These new traders would gather online and organize pump-and-dumps on bankrupt companies and penny stocks. And for a while, it worked. To these undisciplined investors, it seemed like all you had to do was buy a leveraged tech ETF or high-flying stock and watch the profits roll in. 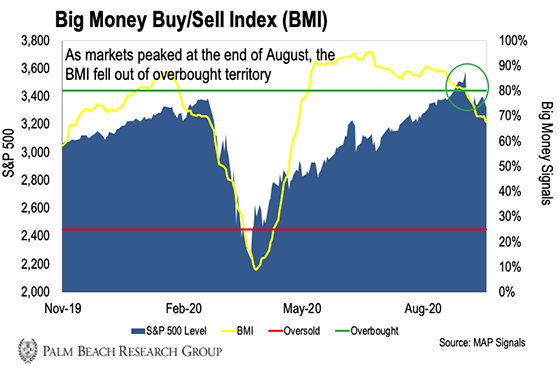 Regular readers are familiar with this index. The yellow line represents big-money trading activity. When that line dips to 25% (the red line in the chart) or lower, sellers have taken control, leading the markets into oversold territory. And when it hits 80% (the green line) or more, it means buyers are in control and markets are overbought.

As you can see, while the market climbed higher almost every day in August, the big money was quietly selling into the strength. At the market peak (circled in green) the selling accelerated… triggering a broader downturn.

Keep in mind that big-money selling isn’t the sole cause of selloffs. This dynamic is actually compounded by the weak hands. Let me explain…

You see, when inexperienced investors see a down day put a dent in their profits, they panic and run for the exits. This causes more selling, which leads to more panicking… and it all compounds into a big drawdown.

Also keep in mind recent remarks from the Fed. With the recent FOMC decision to hold interest rates near zero and yesterday’s testimony to Congress, Jerome Powell has made it clear we’re due for a longer-term economic recovery. To those paying attention (usually the big money), that’s as good a reason as any to take some profits off the table.

However, the Fed has pledged to continue accommodating with interest rates and QE for as long as the recovery takes. (Basically, they’re going to keep printing money.)

As scary as that might seem, that’s actually bullish. With interest rates so low, there’s almost nowhere for investors to put their money and get a respectable return. Except stocks.

And once we get past this volatile period, there’s one sector I believe will hand investors the best possible returns…

The Best Place to Be

So, with that said, as most of the pain is behind us, should we worry for a bigger drawdown?

In my view, no. Because right now, not every sector in the market is falling. In fact, we’re seeing a rotation out of the tech sector and into some more value-oriented spots, like industrials and some consumer stocks. That’s why we’ve seen such choppy market action for the past couple weeks.

As I showed you Friday and Monday, I do expect some bumpy weeks coming up as we get closer to the election. Then I expect a rally after the election, no matter who the winner is – because the uncertainty will be gone.

Once that’s out of the way, the chips will be repositioned. And I’m confident that the most popular sector will be tech once again. I believe tech will be the future of this market and continue to be the strongest performer in the years ahead.

So in short, don’t worry. You shouldn’t panic-sell everything in your portfolio.

What you should do is have your eye on terrific stocks. And if things get any uglier in the market, be on the lookout for phenomenal stocks on sale.

P.S. Tomorrow, I’m revealing my next top outlier stock idea to my Palm Beach Trader subscribers. And, if today’s essay didn’t tip you off, it’s in the tech sector.

It’s one of those “eyebrow-raising”-type stocks. Not the type that the weak hands are chasing.

But these are the stocks that hand us multiples on our money in a matter of months… And with several multi-bagger winners chosen by my unbeatable stock picking system, we have the proof.