You may have voted red or blue in this election…

But if this week’s action is any evidence, the stock market voted green.

People generally look to markets to get a picture of the future, unclear as they may be. After all, stock prices are simply a measure of investors’ confidence in the future.

Many analysts expected a contested or drawn-out election as a bearish catalyst for a major downturn. Others said that a gridlocked government, with two opposing sides controlling Congress, was bearish. But now, in the face of both these realities, stocks voted green in a landslide.

In the market’s eyes, this means the results of the election – whatever the outcome – likely won’t matter.

It’s hard to get stuff done in partisan Washington. And with no unity of party lines across the House, Senate, and Oval Office, it means much of the tough talk on regulations and taxes becomes less likely to push its way through into law… At least, in the market’s eyes.

That sounds great for a continued bull market. But remember, my method of analysis doesn’t indulge in too much theory. Instead, I let the data do the talking. And yesterday’s data suggests higher prices in the future…

I value data above all else. That’s why I keep harping on about my election study.

Remember, history suggested that big money would dump stocks ahead of the vote and bump them shortly after. And while the big money started buying back in a bit sooner than usual, and sold off a little smaller than usual, it’s following this same dynamic. 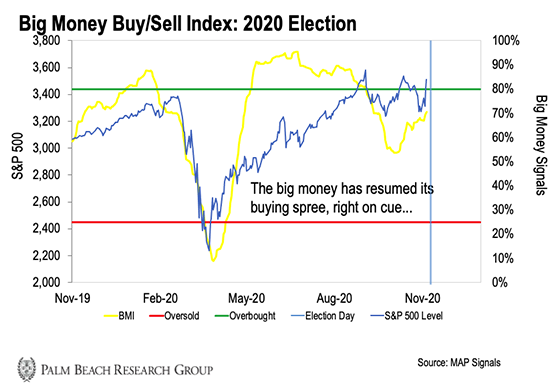 If you haven’t seen this before, this is simply a measure of where the big money – the major money managers of Wall Street – is placing their bets. As the yellow line rises, the big money’s buying. As it falls, it’s selling. And the two red and green horizontal lines point to overbought or oversold levels.

The few weeks ahead of this election were rocky. Big up days were followed by big down days.

Despite that, the BMI held relatively steady… even with last week’s pullback, when we saw the most selling since March lows. This tells us that money managers were waiting in the wings heading into November 3. And now, they can’t get enough of this market…

With the monster rally yesterday and Wednesday, you might think the market’s gotten ahead of itself. But my analysis says this bump in buying is forecasting more green to come.

As Wayne Gretzky famously said, “…skate to where the puck is going, not to where’s it’s been.” And there’s evidence that the big money is following this mantra.

Take a look at the latest data in ETF buying… 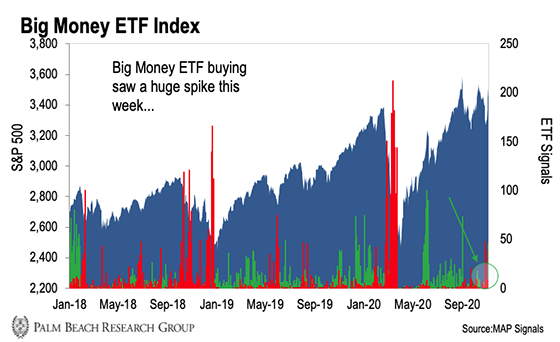 And let’s take a closer look at the most recent data. See that big green bar right at the edge? 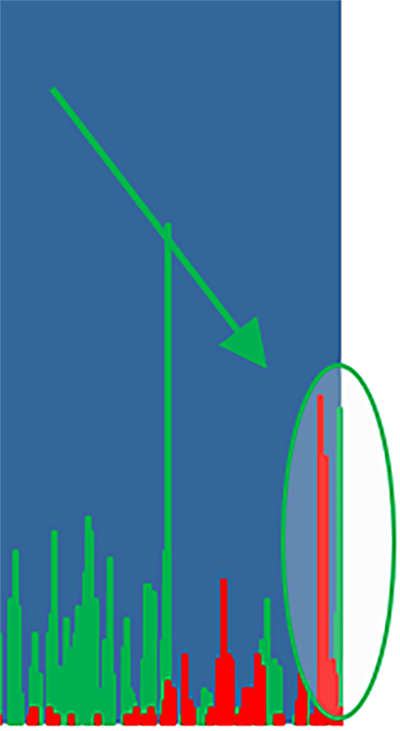 When the big money gets back in ETFs in a major way, that tells us there’s broad bullish sentiment for the intermediate-term future. This, more than many other factors, is an indication of a resilient market going forward.

The ETF selling we saw last week is likely behind us. As the growth trade unwound and rotated into safe sectors, ETFs got whipped around in the frenzy. That’s part of the game and always will be.

But yesterday’s signal data points to ETF buyers beginning to show up. And I’m convinced there’s more to follow.

Here’s the bottom line: The data tells me that the big rotation out of growth we saw last week is reversing. That’s great news for outlier stocks.

As the buying reappears in high-growth sectors like technology and healthcare, as well as broad measures like ETFs, that signals good times to come.

For stocks, this vote wasn’t about red or blue. It was about red and blue… a presidential cycle where major change won’t come easy.

And when it comes to stocks, big money’s vote is all that counts.

P.S. I just have to share this one quick tidbit…

This morning, shares of The Trade Desk (TTD), our all-star holding in Palm Beach Trader, were up over $100 premarket. When I first recommended buying TTD, it was less than $100 per share. So for those who listened to my original recommendation, they basically woke up to a 100% gain in one day, on top of the 500%-plus gains we already have.

I’m not too modest to say I’m proud of that one. But what I want to impart to you is that every single stock in the Palm Beach Trader portfolio has this same potential… And the bullish trend we’re seeing today has me that much more convinced we’ll have many more all-stars like TTD..

To learn how we find these blowout stocks… and how to get them in your portfolio… just click here and learn more.