But at the risk of revealing my inner nerd… I find it soothing.

There is a plain truth in numbers. If you look to the mainstream news or even valued opinions from market experts, you just don’t get those same black-and-white answers.

And right now, there’s a question that everyone reading this likely wants the answer to: When will this stock market crack?

So, in today’s issue, I’ll lay out my case for the exact day the market will begin to correct again.

You’ll see how I got to the answer… and where we’re going next. And most importantly, I’ll show you what to do with your money when the moment arrives.

If you know me, you know I’m an eternal optimist and perennial bull. But ultimately, I’m a slave to my data.

You see, most of my market research relies on an unbeatable stock-picking system I built over decades. It scans 5,500 stocks a day, ranking each one for fundamental health (things like earnings, sales, and profits) and technical factors (things like new highs, lows, or how strongly a stock is trading).

Then, I overlay a special algorithm designed to identify when big money is moving in and out of stocks. It spits out buy and sell signals on stocks that are seeing big money flows.

This process, of course, is how I pick my recommendations to Palm Beach Trader subscribers. And it’s led us to gains like…

But that’s not all my system does.

Each day, I take all the buy and sell signals of the 5,500 stocks and plot them on a 25-day moving average. The result is the Big Money Index (BMI) – which tracks the big money’s broad direction. 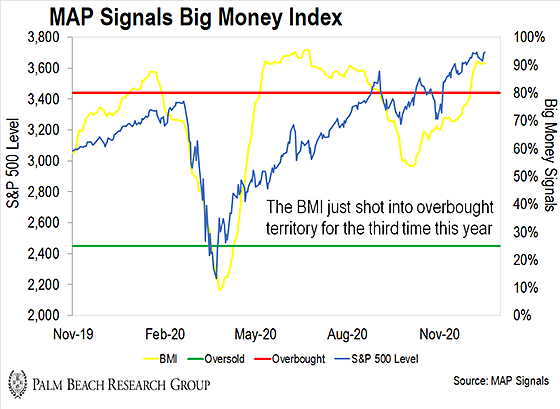 And the way it works is simple. When the yellow line drops below green line, the market is oversold and we can expect a big bounce in the near term.

When it’s above the red line, the market is overbought and we can expect a near-term pullback.

It’s been highly accurate for identifying market tops and bottoms for three decades. It’s what allowed me to alert readers in late January that a market top was near. It also allowed me to call a market bottom for March 20 (off by one day). My data told me to bet on America… and to tell you to buy stocks in late March and early April. (Anyone that listened is must be happy… The S&P 500 is up 65% since.)

But that was then, and this is now. And as you can see in the chart above, the stock market is heavily overbought right now…

And while overbought conditions can persist a long time, like we saw this summer… They don’t last forever.

So that begs the question: when will it crack?

The Data Points to This Specific Day

So what’s the data say is next for the market? The good news is I’ve done all the hard work and number crunching for you…

We can know where we’re going by looking at where we’ve been.

What’s important to know is that the BMI can stay overbought for a long time. It did so for four months this year – from May 6 to September 2.

The key is when the BMI peaks in overbought territory. That’s when we need to pay attention.

It often drifts lower as big-money buying disappears and selling increases. But stocks often continue to rise for some time thereafter. When the BMI peaks, it’s usually a good time to reduce risk, take profits, and save cash to go shopping when markets eventually do come under pressure.

So let’s put this all together:

So, we can not only summarize what history has told us, but we can forecast the precise dates and levels for the next overbought period. Let’s have a look:

Remember in the beginning when I mentioned most people cringe when thinking about crunching numbers?

Well, number crunching allows me to be pretty accurate when calling market tops and bottoms.

I used this same technique when I called a market bottom for Friday, March 20 of this year. (I was off by one day. The S&P 500 bottomed on Monday, March 23.)

So I will boldly go ahead and make the following predictions, based on my 30 years of data crunching, and using the averages we discussed above:

Of course, those are very precise figures. I’d be surprised if things play out in this exact way.

But one thing is for sure… history suggests a market peak is near. And 30 years of data tends not to lie.

Big money can show us the way forward. It can let us know when to keep our chips on the table, and when to take them off.

Data may be boring to most people, but it’s my secret weapon for navigating markets. Some see a sea of unrelated numbers… but I see a market map.

And I’ll be keeping a close eye on it.

P.S. I’m confident in the numbers I’ve forecasted for the near future. But I’m even more sure of my ability to profit from these upcoming conditions.

That’s because my unbeatable stock-picking system reflects my personal philosophy to investing… It relies on the hard data, tracking when the big money pours into stocks.

The Trade Desk, SolarEdge, and Paycom are not our only triple-digit winners. My Palm Beach Trader subscribers have also seen gains of 192% from Nvidia (NVDA) and 127% from Veeva Systems (VEEV).

The market will hit a trough soon, but there’s still massive gains to be made right around the corner. Just click here to learn more…