Take flight, for example. On December 17, 1903, the Wright brothers made history. The first-ever human flight – a 12-second hop and glide across a field – paved the way for global air travel.

It’s one of the most significant human advances thus far. But for all that aircraft changed the world for the past century, the principles behind it haven’t.

So it goes for stocks, too. The more the market changes, the more it stays the same…

And in today’s issue, you’ll learn which static elements of the market to focus on to ensure you profit in 2021 and beyond – no matter what surprises may be in store.

Long ago I discovered an inescapable truth: big money is the real market-moving force.

There may be tens of thousands of professional investors: hedge funds, pension funds, and asset managers. While that may seem like a lot, there are tens of millions of everyday investors. But I have found that the muscle is in the few, not the many.

As stock investing grew in popularity through the turn of the 20th century, the market changed dramatically. It grew, listings came and went, and operators and investors engaged in a never-ending tug of war. Players changed. Technology advanced. Commissions shrank. Competition grew. The landscape was dynamic and ever-changing.

But the underlying truth remained – big-money players have an advantage the little guy has little hope of matching.

Decades ago, this truth made me realize that all I had to do was some clever sifting of the thousands of available stocks. Weed out the ones with unwanted qualities – 90% of them.

Once that’s done, I look for signs that big-money investors are plowing money into the remaining 10% – the high-quality stocks.

That simple formula allowed me to win in stocks year after year. And that formula will work just as well this year, as it always has.

For the proof, let’s just look at 2020 through the lens of big money…

Let’s start with the Big Money Index (BMI), a 25-day moving average of big-money buy and sell signals on the top 10% of stocks. 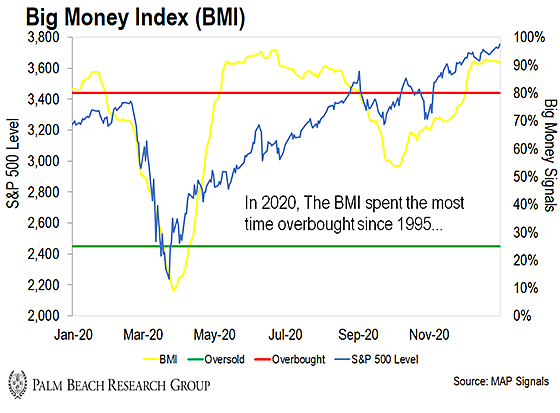 In 2020, the BMI spent the most time overbought since 1995. It was also the most oversold since 2009. Reflect on that… In 1995, we saw the start of the internet bubble. Contrarily, 2009 was an emotional low as the severity of the Great Financial Crisis peaked. We saw two 30-year extremes in the same year!

Another important component is ETF activity. And once again, 2020 saw record activity.

2020 saw record ETF selling in February and March, as pandemic panic took its toll on the stock market. 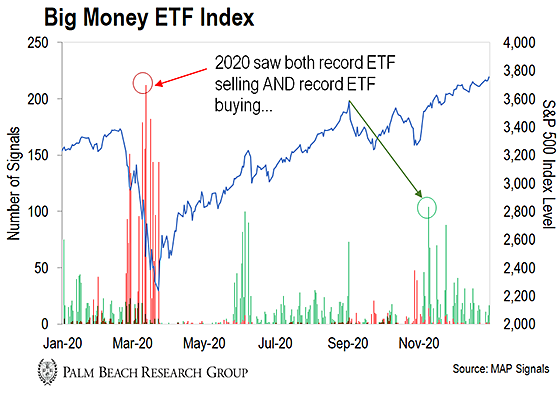 Lastly, I want to look at where big money went last year. Looking at 2020’s cumulative buy signals, we see tech, healthcare, and discretionary were the top 3 bought sectors. Communications, utilities, and energy were the three least bought sectors.

Tech, especially, was humming along all year. It makes sense… Tech was already the winning sector pre-pandemic. So, when everyone was forced to stay home, tech got even more love – from both consumers and big money.

That is, until the vaccine announcement. Since November 9, the date of the first vaccine announcement from Pfizer, there was a huge rotation. Capital moved into “reopen” stocks: small cap companies poised to benefit from a more normal economy. When people re-emerge to go to restaurants, movies, and take cruises, these battered sectors should see a big revival.

So what does this all tell us?

That even in the market insanity that was 2020, big money showed us the path to follow. And I have no doubt it will continue to do so this year…

Since flight began, planes have gotten bigger, faster, and more comfortable. But the principles of lift haven’t changed. The same forces that let the Wright brothers fly for 12 precious seconds are what allow transcontinental flights to occur every single day.

Since stock investing began, the dynamics, players, and technology of stock trading has changed immensely. But supply-demand principles haven’t changed. The big money’s firm grip on the market surely hasn’t been lost, either.

For the outlier year that 2020 was, it was all driven by the same forces that make the market in the best and worst of times. Recognizing and following these principles – while blocking out the noise of mainstream media – will be key to profits in 2021 and beyond.