Then, just hours before I was to fly back to New Jersey to see her, my girlfriend of two years blindsided me and broke it off. I was devastated… but still made my flight, confident that the worst of the summer was behind me.

I should have known better.

Somewhere over South Carolina, a lightning bolt struck the engine on the left wing of the plane. The plane jolted and lurched. Oxygen masks dropped down. We all looked around thinking it was a mistake. Someone even laughed…

Then, I saw an unconscious flight attendant get dragged and strapped into a seat. She must have hit the ceiling when the plane suddenly dropped. The stranger next to me prayed a Hail Mary, then assumed the crash position. It was surreal.

We made an emergency landing in Charlotte, North Carolina, and waited in a hangar on the outskirts of the airport for a new plane. I wound up making it home safe at 11 a.m. the next morning.

These two back-to-back events showed me just how quickly things can go from easy and carefree, to disruptive and uncomfortable. And I can’t think of a more apt comparison to today’s stock market…

How We Know a Correction Is Near

We all know a major market correction is coming eventually.

The stock market keeps whizzing to new highs, resistant to everything from contested elections, to a blue-sweep with negative tax implications, to a deadly pandemic.

The clear call that stocks are decoupled from reality came last Wednesday, when protesters breached Capitol Hill forcibly for the first time in over 200 years. Peaceful protest was overshadowed by insurrection, violence, and death. Stocks could have cared less. The Russell 2000 index closed +4% that day.

Eventually, the carefree times will come to an abrupt end. I think we’re getting close.

In fact, on December 18, I laid out my analysis for the near-term direction of the market, based on my proprietary data…

I stand by these calls, even with today’s volatility. Let me walk you through the main things I’m watching that have me convinced…

Right now, the BMI is heavily overbought and starting to level off; a precursor to a correction. Markets have been overbought for five weeks – right in line with a 30-year historical average I’ve observed.

My data told us to expect this. We believe the BMI has peaked for this cycle, which our data predicted would happen December 21. So far, the actual peak reading of 91.9% happened on December 18 – off by one trading day. 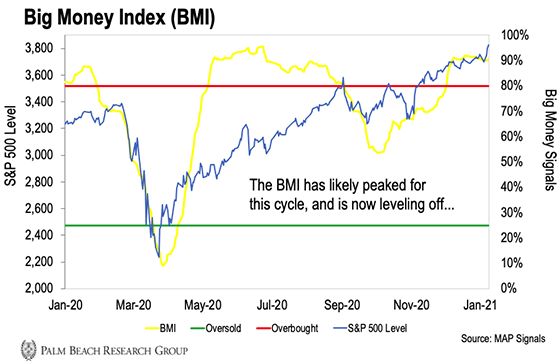 My data told us to expect this. We believe the BMI has peaked for this cycle, which our data predicted would happen December 21. So far, the actual peak reading of 91.9% was December 20 – off by one day.

We also saw late-stage irrational stock buying in the first week of 2021. 10 out of 11 sectors saw more than 25% of the stocks we track within it bought in a big way. Three sectors saw more than 100% of those stocks bought: materials, financials, and energy. (This simply means that the stocks within these sectors were bought with big-money patterns multiple times through the week, totaling up to a higher number than the number of stocks in each group.)

Typically, mega-buying like this – while the market is already extremely overbought – means things are frothy. 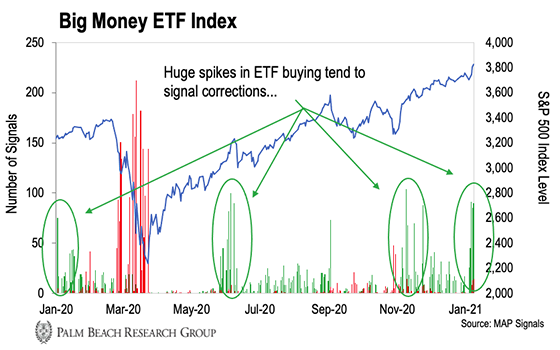 This is the pilot warning you that we may encounter turbulent air ahead.

But you shouldn’t freak out or assume the crash position. I’m not bearish for the medium or long-term.

You see… as vaccinations are deployed across the world and we return to something resembling normal, company earnings should be great this year. At the same time, one look at the market’s parabolic rise in the face of negative news tells us we should all expect a correction soon.

I see a coming market pullback as a natural correction. When stocks get too lofty, they need to come back to earth. If you’re itching to buy, I’d suggest waiting… My data tells me better prices are likely up ahead in that turbulence.

Right now, extreme greed is in the air. Whether we like it or not, the data points to a near-term market peak in the coming weeks.

We may lose cabin pressure, but if you’re calm and collected – you’ll get through it just fine. I’ve gone through it many times.

Once this turbulence is behind us, the year ahead looks great for the stock market. And I’ll continue recommending the best high-growth companies for my subscribers to best take advantage of it.