Picture this: You’re a car salesman, and your boss tells you that you have to make $100,000 in sales before the end of the day, or you lose your job.

What’s the best way to go about it? You could try to make it all in one go by focusing on the Cadillac in the lot, which costs $100,000.

But the customers coming into your lot aren’t looking for a Cadillac. Because they know they can’t afford such an expensive car.

You recognized that demand would be higher for the cheaper cars. So you adapted to what your customers wanted – and managed to rake in the dough.

As it turns out, the market has already taken the same approach…

At the end of July, Apple (AAPL) announced a 4-for-1 stock split to occur at the end of August. That means that every AAPL share would be split into four shares.

Apple closed at $504 a share on the day of the split, which meant each share was split into four shares worth $126 each.

And it’s not the only one.

Not long after, Tesla (TSLA) announced it would be doing its own 5-for-1 stock split, too.

Now, I know there’s still a bit of uncertainty surrounding the markets. After all, though we are now rolling out a vaccine, the coronavirus pandemic is still a threat, and the economy hasn’t shaken off some of the negative effects – like the dismal unemployment and GDP figures.

Below, I’ll get into why this is just the beginning of a new trend… and what it means for investors going forward…

But they’ve become rarer. Last year, there were just five.

While this was Tesla’s first stock split, Apple hadn’t done a split since 2014. Before that, its last split was in 2005.

And now, I’m betting that other big-name companies, like Amazon (which hasn’t split its stock since 1999), will join the party and announce splits as well.

What’s behind this prediction? It’s simple: Retail investors are creating a new source of demand in the market.

Over the past few decades, stock prices have become so inflated that they’ve shut out a lot of mom-and-pop investors.

Take TSLA for example. Even after its stock split, it’s still trading at around $634 a share at writing.

That may be pocket change for the big-money institutions on Wall Street… But for the average investor, that’s equivalent to the Cadillac on the lot that they can’t afford.

This has been getting more and more extreme. Take a look at this chart of the average stock price in the S&P 500 over time: 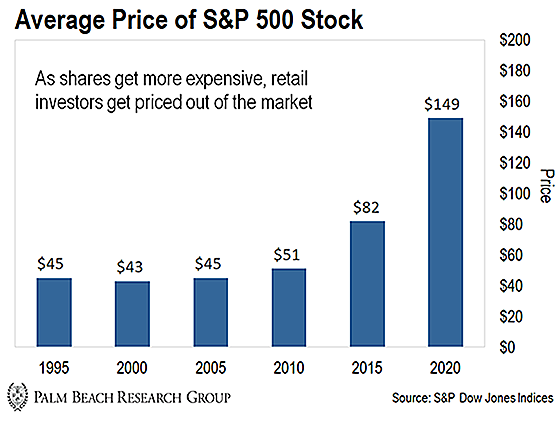 Now, if you were the head of an S&P 500 company over the past few decades, you didn’t mind that the average Joe couldn’t buy your stock. Because you had the big money on Wall Street backing you.

But if there’s one thing you can count on in the markets, it’s greed. Companies like Apple and Tesla realize retail investors are flocking to the market.

With most brokerages cutting their fees, and apps like Robinhood making trading easier and more popular than ever before, there’s now a whole new group of eager investors just waiting to buy their company’s shares. Back in May, Robinhood revealed that it had added 3 million users so far this year (half of which had never opened a brokerage account before), for a total of 13 million users.

So why not lower the nominal price of your shares to make them “cheaper” for ordinary investors to buy? Remember, splitting a stock doesn’t change a company’s value. It just makes it easier for mom and pop to invest in it.

And here’s why that matters…

Regular readers know I focus on outlier stocks. These are companies that thrive in any market… and could rise 10x, 100x, or even 1,000x.

In fact, a 2017 study by an Arizona State University professor found that over the past 100 years, 4% of stocks made up 100% of the gains in the market that exceeded Treasury bills.

So if you’re not buying these stocks, you’re wasting your time.

And now, with more stock splits possibly on the horizon, there’s never been a better time to buy them. Not only will these splits make them more affordable… but the influx of more retail investors will drive their prices higher over time.

After all, on the day after AAPL and TSLA announced their splits, their stocks went up 10% and 13%, respectively.

And that’s just the beginning. According to two separate studies, split stocks outperformed the market by 8% the year following the split… and by 12% over the following three years.

It makes sense. These splits entice more investors to pile in, pushing these companies higher.

By the way, there’s another way for small investors to buy phenomenal companies with high nominal prices: fractional shares.

Fractional shares are simply a fraction or part of a full share. This means you can invest whatever dollar amount suits your portfolio best when it comes to certain companies with higher nominal share prices. Sometimes, it could be as little as $5–10.

This practice is still relatively new and not available to all investors, which is why companies such as AAPL and TSLA still deem it worthwhile to do stock splits.

But some online brokers, like Fidelity and Interactive Brokers, make it easy nowadays to purchase fractional shares. In fact, I’ve bought fractional shares for my kids on my Fidelity app. Be sure to consult your individual broker to see what options are available for you.

P.S. One important note to leave you with…

Even if a stock has a high share price, that doesn’t mean it’s “expensive” on a fundamental basis. In fact, some of the biggest winners in my stock-picking advisory Palm Beach Trader had share prices over $100 when we opened them. And they’ve gone on to multiply my subscribers’ money several times over.

My unbeatable stock-picking system sifts through the noise of high stock prices and finds the winners – no matter what their share price. To learn more, just click here.