My 9-year-old loves his Rubik’s Cube. But this past weekend, I “borrowed” it in a fit of nostalgia…

Transported back to 1982, I had to learn to solve it. The cube has six colored sides and nine pieces on each. That means there are 43 quintillion possible combinations. That’s six times the estimated grains of sand on earth.

Knowing that, it seems like a fool’s errand to figure out a solution for the cube. But it turns out that a simple strategy – backed by one of a few different “algorithmic” approaches – consistently unlocks the solution.

I’ve got my solutions down to just a few minutes. (I was proud of that, until I saw that YuSheng Du broke the world record for solving a Rubik’s Cube in 3.47 seconds. Most pros target less than 10 seconds.)

So, what does my recent nerdy Rubik’s Cube fascination have to do with stocks?

In an ocean of investment opportunity, it often seems impossible to consistently beat the market. It’s only natural to assume big winners in stocks had huge luck. But to consistently pick stocks, year after year, that crush the market… how’s that even possible?

The same logic applies. There are virtually limitless combinations of ways to “solve the market.” But applying a simple strategy… and a few “algorithms”… can produce phenomenal results…

A Simple Solution to an Even Trickier Problem

Regular readers of Palm Beach Insider know what I’m talking about here: my unbeatable stock-picking system, built and refined over decades of studying the markets. I can say without a doubt that it’s led to some of the biggest stock gains of my life, and my subscribers enjoy that same level of success.

The idea behind this system is simple: identify when big money – the major institutions and hedge funds of Wall Street – is buying stocks with superior fundamentals. The system ranks stocks for fundamental strength, then flags them when they get bought or sold in a big way.

That’s it. A simple combo of a concept and set of algorithms – the same things needed to solve a Rubik’s Cube.

And by looking through the lens of big money, we can get a clear view into how this works like no one else.

You see, big money flows in phases. As we showed Friday, the Big Money Buy/Sell Index (BMI) just went overbought. This means 80% or more of big-money signals were buy signals, on a rolling 25-day moving average. When this happens, it indicates buying is unsustainable and should peter out at some point in the near future.

That begs the question: When?

Since our data began in 1990, the BMI has gone overbought 68 times. The average time it took to peak after that point was 23 trading days. That suggests Wednesday, January 6, is when the BMI should peak – based on 30 years of data.

But keep in mind, 2020 saw a record period of overbought conditions. Since the first overbought reading on May 6 this year, the market stayed overbought for 55 trading days – or nearly 4 months – until September 2.

December 2 marks the third time this year that the BMI has gone overbought: January, then May, and now in December. When overbought finally peaked in February, it preceded March’s monstrous drop. July’s peak eventually led to volatility in September and October.

But the BMI is just one piece of the puzzle…

November also shattered the record for biggest ETF inflows. As we’ve shown in the past, massive spikes in ETF buying tend to precede market drops. 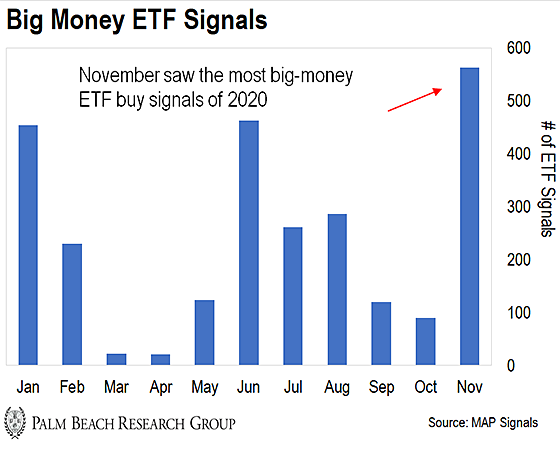 Another “algo” we use in focusing the market picture is sectors.

You see, since vaccines were announced, big money flooded into prior “dead” sectors and value stocks.

Tech had been dominant the whole year prior, but recently it’s been held back while poorer-performing sectors got gobbled up in anticipation of a broad reopening of the economy – even though those sectors are still fundamentally unattractive.

The final “algo” for solving the market is on a single stock level. For that, we look for stocks with growing sales, earnings, low debt, and business moats. When those get bought by big money, that’s when we get excited. But right now, big money is favoring the class clowns – not the valedictorians.

All of this tells me stock prices will most likely go down in the next month or two – not up.

How I “Solve” the Market

If we think of how to analyze big money flows and what it means for stocks, it’s like solving that Rubik’s Cube.

You solve a Rubik’s Cube in layers. First, do one color on one face. Then do the next layer to get the sides solved. And finally, do the third layer to complete the cube. Using simple algorithms, you can solve it every single time.

I see the market the same way:

There’s a 1 in 43 quintillion chance you solve a Rubik’s Cube by random chance. You may or may not have better chances for solving the market.

Learning a simple concept and set of algos lets you solve the cube correctly every time. It stands to reason that the same logic could be applied to the mysterious puzzle of the stock market.

Given these conditions, investors should look to take some gains off the table on any strength around the time of our projected BMI index peak – January 6. Nothing wrong with a little dry powder to take advantage of lower prices, when they inevitably come.

P.S. Twice a month in my stock-picking advisory Palm Beach Trader, I use these same criteria to spot the big market winners of tomorrow before anyone in the mainstream has heard of them.

And the results speak for themselves… Five of the open positions in PBT are doubles or more, with some running as high as 900% from our entry price.

Investing doesn’t have to be complicated. A proven model and common sense should be all it takes to make life-changing differences in your portfolio. Just click here to learn how to get exclusive access to this system, and see firsthand what difference it makes.