To get the first satellites up into orbit, NASA first needed to figure out how to get them out of Earth’s atmosphere.

To pierce that layer, scientists needed to build rockets that could blast up out of the atmosphere at 25,000 mph. Once there, satellites could then circle around Earth suspended in geostationary orbit, by maintaining a speed of about 7,000 mph.

To launch a satellite, you need a powerful rocket to blast it through the earth’s atmosphere. To get an overbought market, stocks need to hitch a ride on rocket-fueled buy signals.

Most investors don’t get to see when stock prices pierce the atmosphere. But with our Big Money Index (BMI), we know exactly when the big money is sending stocks into orbit.

You might think that’s a good signal to start selling. But in today’s essay, I’ll show why conditions like we’re seeing today are just the beginning of a wild ride higher for stocks… and what specific sell signal to look for before you cash in.

To start, let’s take a look at the latest BMI data… 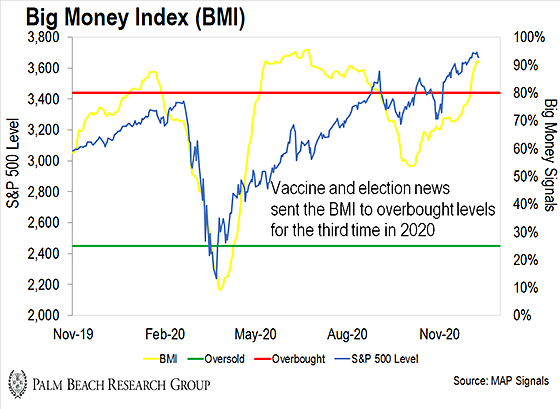 Regular Palm Beach Insider readers know the red line of the BMI acts as a barrier to overbought levels, similar to the earth’s atmosphere. Once the yellow line crosses the red line, we’re officially in overbought territory. It indicates that at least 80% of the big-money’s activity is on the buy side.

As a reminder, the BMI measures all big-money buy and sell signals over a 25-day moving average. If there are no sell signals for 25 days, for example, the BMI would be 100. In other words, the yellow line can’t get much higher from here… 100% is the max.

While the BMI can’t break above 100, it can sustain orbital velocity for weeks and in rare cases (like earlier this year), months. That’s why we expect the market to stay overbought for at least a few weeks, followed by another bout of strong volatility in early 2021.

For the past couple months, the BMI has bounced up and down as money sloshed in and out of sectors. Then last week, stocks finally pierced through the red zone. My data suggests that they’ll stay suspended here for a bit. In fact, historical data tell me the BMI should peak around January 6, 2021.

When the selling finally arrives, it acts like gravity on the BMI. And a falling BMI will likely begin once the reopening stocks slow their climb.

So, before we get into what sell signals to look out for, let’s recap the launch that got us where we are now…

Since the vaccine news on November 9, companies with market capitalizations of less than $25 billion have collected the most capital. In fact, nearly 80% of all the buy signals since then have been in smaller companies… what I’ve been calling the “reopening trade.”

Those tiny companies are the rocket fuel lifting the market. If they continue to hold up, the BMI will likely maintain its orbital velocity.

Looking over the same period since November 9, we see that the top six sectors attracting the most buys are:

This just shows how 2020’s most hated sectors have come back with a vengeance. Sectors most hurt by the stay-at-home orders earlier this year have now gotten a boost with a reopening seemingly in the near future.

But excitement for these areas of the market is running hot to say the least. One might even call it exuberance…

And when we plot this magnitude over a price chart, “invisible” patterns emerge.

Take a look at the chart below of the discretionary sector. 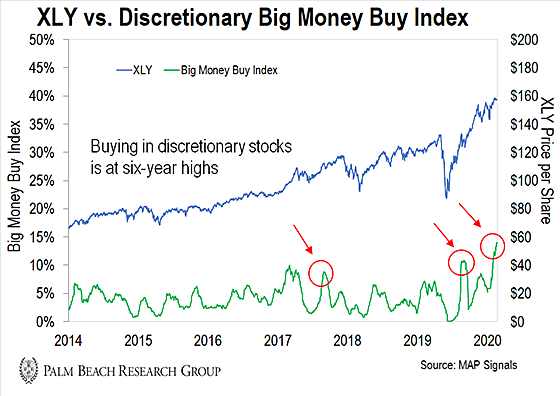 This chart plots the 25-day moving average of big-money buy signals in discretionary stocks against the performance of the Consumer Discretionary Select Sector SPDR ETF (XLY). A rising green line means that the momentum of buying in the sector is picking up.

As you can see, the big-money buying in discretionary stocks is at a six-year high. But notice how when the green line peaks, it tends to line up with sector peaks…

And I’m seeing buy signal data peak across ALL the sectors I mentioned above… not just discretionary.

Wall Street tends to think forward – not in terms of today. But the street has repriced all of these previously hated sectors virtually overnight.

That’s why these charts show the real picture. They have risen so far, so fast, that they may be too hot to handle in the near term. And when these sectors start to slow down, I’m convinced that’s when we’ll see an influx of volatility into the markets.

That would be the first signal to me that it’s time to take profits. But that doesn’t mean buying has left my mind…

Bumpy Ride Home Ahead, But Enjoy the View

Don’t let these new overbought conditions make you think another downturn is days away. We are heavily overbought, but things should stay that way for the next few weeks.

For any astronauts reading this, now would be a good time for a spacewalk. But when it’s time to prepare for a descent back to earth, don’t let it catch you off guard.

The ride back can get bumpy and hot. But how sweet it is to come back home… Because the best stock opportunities tend to come from the fall back to earth.