The most important rule I’ve learned over my 32-years of covering financial markets is this: In tech investing, usage drives value.

It’s called Metcalfe’s Law, and it states that the bigger the network of users, the greater the value of the network.

And when Metcalfe’s Law really kicks in…

It’s like a barrel of TNT… on top of a crate of nitroglycerin… on top of 100 tons of weapons-grade plutonium… exploding usage higher and higher.

As more and more people signed up for its Amazon Prime premium membership, its share price climbed from around $300 in 2014 to a recent high of over $3,700.

You can see this in the chart below… 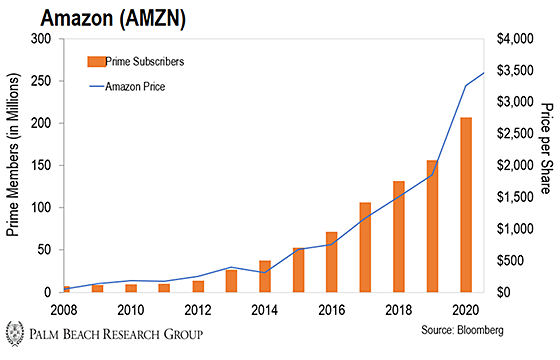 The same thing happened with Google.

Over the last decade, as more of the world went online and discovered Google, its search volume exploded from around 2 million searches a day to over 25 million.

And look what it’s done for Google’s share price… 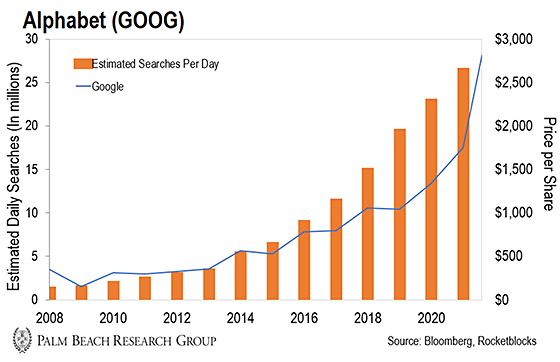 The bottom line is that more usage equals more profits…

And we’re about to see a usage “Hyper Boom” in the adoption of another technology: crypto.

A Hyper Boom in Usage

Based on my research, we’re about to see an explosion of crypto adoption on a scale we’ve never seen before.

You see, the adoption of crypto is tiny compared to other technologies. It’s just 200 million people out of a total addressable market of more than 5 billion internet users.

But according to fintech analytics company Portfolio Insider, the current bitcoin adoption rate has been outpacing the internet’s user growth rate… And it will reach 1 billion users within the next four years.

But what excites me most is the number of major U.S. financial firms offering crypto services to their clients. Just look at the number of people they could potentially bring to this emerging asset class:

In total, banks with a combined 300 million checking accounts are coming on board.

And for the first time, customers of hundreds of U.S. banks will soon be able to buy, hold, and sell bitcoin through their existing accounts.

But it’s not only banks getting into crypto. Credit card companies are starting to bring crypto to their platforms, too. This influx of potential crypto users is massive.

And we’re also seeing big tech finally get serious about offering bitcoin on their networks.

All in, we are looking at more than 5 billion potential new users about to come into bitcoin.

We’ve never seen a tsunami of new users coming into crypto like this before.

And bitcoin is what I call the “gateway drug” to the rest of crypto. Of all these new people coming into bitcoin, many will filter into other smaller coins.

And because these coins are much smaller than bitcoin, they are much more sensitive to changes in usage…

That’s where my “Catch-Up Coins” come in.

The Next Wave of Blockbuster Cryptos

The next wave of blockbuster crypto projects will help bitcoin and Ethereum reach the billions of people coming in from the Hyper Boom.

And because they’re partnering with larger projects, they’re already seeing immediate increases in their usage.

Remember, usage drives value. And where I see the most usage right now is in Catch-Up Coins.

I call them Catch-Up Coins because just one of them can represent an entire lifetime of wealth creation.

Friends, you can only go from 200 million users to 5 billion users once. The Hyper Boom in new users coming into crypto will ignite the biggest rallies we have ever seen in crypto’s short 12-year history.

An influx of new users like this can propel the value of these coins to levels they’ve never seen before.

The key is to get into them now before the Hyper Boom really takes off… So take advantage of the recent pullback in the crypto market to scoop them up at an even deeper discount.

You can learn more about my Catch-Up Coins right here. Plus, you’ll get the name of my No. 1 Catch-Up Coin for free.