Nick’s Note: America is in unprecedented territory… The average American is more than $40,000 in debt… a number that has grown by nearly 15% over the past four years.

Meanwhile, wages and the U.S. economy aren’t keeping up.

Stansberry Research founder Porter Stansberry believes there is only one possible outcome: a “Debt Jubilee.”

Today, we’re sharing the first chapter of Porter’s book, The American Jubilee. In it, he discusses the four things that must happen for a Jubilee to take place… and reveals several troubling graphics that suggest a Jubilee is a matter of “when,” not “if”…

If you study American history, you’ll see that Debt Jubilees occur only in a unique type of extreme political environment.

After all, a Jubilee is a radical measure.

The government essentially steals money from one group and hands it to another.

In order for this to occur, four elements must be in place…

We have the largest gap ever between the rich and poor…

We have huge increases in violent protests about immigration and race…

We have a completely ineffective government…

And we have extreme animosity toward the “elites” from both the left and right.

There’s actually a name for this type of political and social phenomenon.

Populist movements are characterized by extreme anger at the government, at the wealthy, at the establishments, and at “newcomers” and minorities.

As the director of an Alabama group that tracks violence and hate crimes around the country told Newsweek in June 2017: “There has been a massive explosion of violence across the country.”

I’m sure you’ve seen this yourself.

The hatred and anger is like nothing I’ve witnessed in my lifetime. And it’s coming from all sides. A member of my staff went to a book reading in Baltimore by one of the most famous left-wing authors in the country.

The author told the crowd that he wished he could go back in time and smother Donald Trump in his crib as a baby… or convince Trump’s mother to have an abortion.

This epitomizes the political and social environment in America today.

From Black Lives Matter to the anti-immigration movements… to the rejuvenation of white supremacists… to the tripling of membership in the Democratic Socialists of America.

It’s clear we are in the middle of an extreme “populist” period in America.

Ray Dalio, one of the richest men in America, studied the political environments of the past 100 years and concluded in March 2017…

Look at this chart. The big spikes show when populist politicians got the most votes in America and abroad… 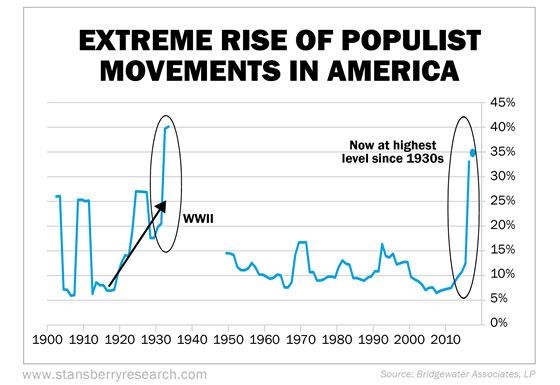 So, what does this all mean?

It proves that what we’re experiencing today is eerily similar to what happened in the 1930s… right before the biggest and most radical Debt Jubilee in American history.

The economic comparison is stunning.

Interest rates hit zero leading up to each of these periods… 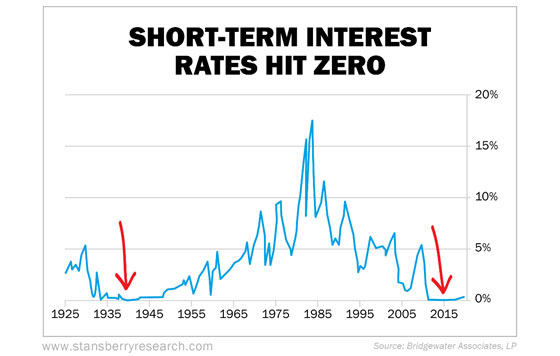 The government went into mega money-printing mode during both periods… 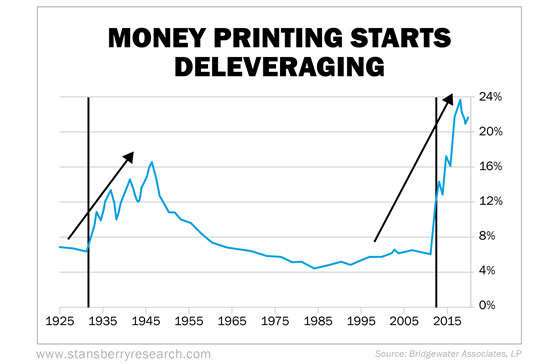 Printing money caused the stock market and other risky assets to boom during both periods… boosting the wealth of the rich, but doing nothing for the poor… 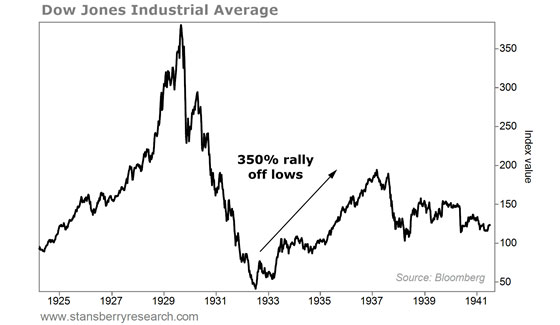 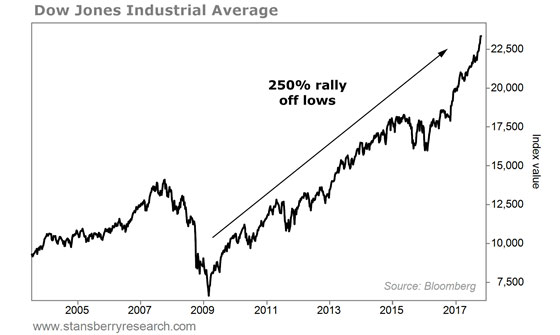 During the 1930s, just like today, the wealthy acquired a much higher-than-normal percentage of our nation’s wealth… 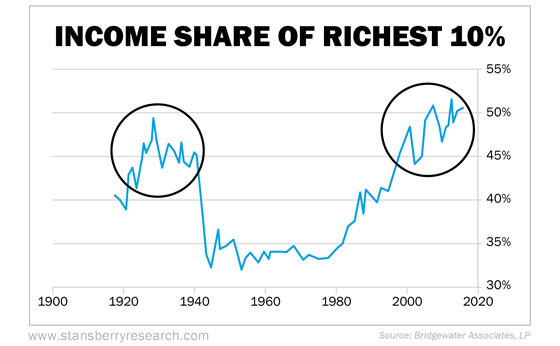 And in both the 1930s and today, the percentage of the population who were foreign-born was higher than normal… causing animosity among the “common man.” 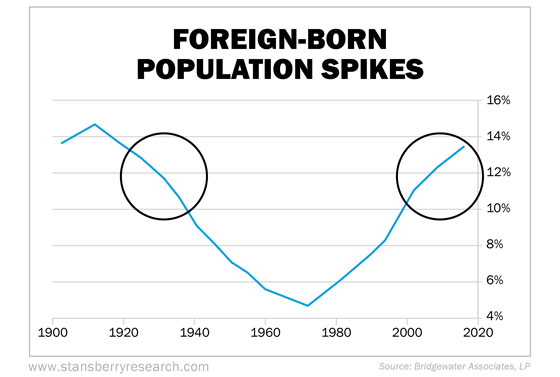 Just like today, the economic conditions of the 1930s caused extreme income inequality.

Even the political characters are the same…

The 1930s saw a popular socialist presidential candidate just like we had in 2016. Huey Long was a former governor of Louisiana and a U.S. senator. He proposed an income cap at $1 million… a 30-hour federal work week… and 100% income taxes at the highest level.

Long even established 27,000 “Share Our Wealth” clubs around the country and had a radio show that was listened to by one in five Americans.

So where did this all lead?

It led to America’s most dramatic Debt Jubilee to date…

Nick’s Note: Porter says that you may not realize it, but a financial revolution is already starting to take place across America. The Charlottesville, Virginia riots… the burning of inner cities… the resurgence of neo-Nazi groups… and the “Black Lives Matter” protests are all signs that a Jubilee is coming.

But you still have time to protect yourself. Porter and his team of analysts have put together a presentation to explain everything. You’ll learn how the Jubilee will play out, as well as the steps you can take to survive… and prosper. Watch it here.

Do you think “PC” culture has gone too far? See this viral message from controversial millionaire Doug Casey… 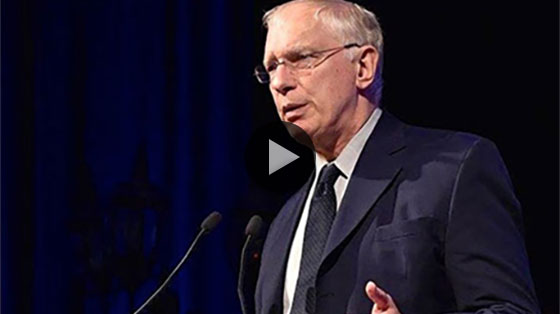