That’s the day President Trump will likely introduce his new tax plan to the American people.

I won’t bore you with the nitty-gritty of the new tax code.

Instead, I want to draw your attention to the nine most important words in this legislation: “one-time tax on trillions of dollars held overseas.” 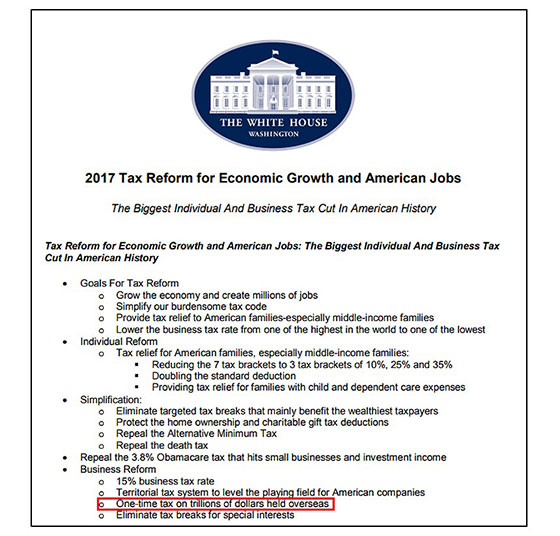 That means the biggest tax cut in U.S. history will be on its way to becoming the law of the land.

When that law goes into effect, hundreds of U.S. corporate giants will issue $2.6 trillion in “tax settlement checks” (as I like to call them).

Let me put that number in perspective for you.

That’s more than the gross domestic product (GDP) of California… the sixth-largest economy in the world.

And it has the potential to add tens of thousands of dollars to your account in “windfall” profits.

The only question is… will your name be on one of these checks?

In a moment, I’ll show you three things to look for to find companies that will benefit the most from the president’s tax policy.

Before I tell you how to claim your piece, let’s look at the possible impact of the biggest tax settlement check in history on just one company.

This isn’t the first time corporate America has enjoyed a “tax repatriation holiday.” In fact, the last one was in 2004, when George W. Bush held office.

It was called the Homeland Investment Act of 2004.

The act gave a one-time deduction of 85% from taxable incomes received from foreign subsidiaries. That made the effective tax rate 5.25%, down from the normal 35%.

Apple was one of the biggest benefiters of the last tax repatriation holiday.

Today, Apple has $230 billion in foreign cash. Based on history, we expect Apple to repatriate 90% of that cash, or $207 billion.

And historically, the company has paid out 25% of all income to shareholders in the form of dividends.

In other words, this tax repatriation holiday would add $53 billion to Apple’s dividend payout.

But that’s not all he’d get. You see, Apple spends even more of its income, 70%, on buybacks.

Buybacks happen when a company repurchases outstanding shares. They’re good for investors because they reduce the number of shares available… making the shares you own more valuable.

So that 70% represents another $151 billion that will go right back into Apple shareholders’ pockets.

That investor with 1,000 Apple shares could expect to get an additional $27,000 in value through buybacks.

Now, you’re not going to get that all in one chunk. The payouts will be over time.

Nevertheless, these tax settlement checks will have a profound impact on your bottom line.

How to Identify the Best Tax Settlement Companies

Over 90% of companies that hold cash overseas will be affected by President Trump’s tax legislation.

Here are three criteria to identify companies that can return the biggest tax settlement checks:

Apple is one company that fits these criteria. By finding other stocks like this before President Trump’s new tax plan, you can set yourself up for large payouts.

When you put them all together, they have the potential to add tens of thousands of dollars in “windfall” profits to your account this year.

The U.S. government is on the verge of passing a law that will shock the auto industry.

You see, by the end of 2017, every single car in America could be required to have this advanced computer on board.

As a result, one company could see its share price rise as much as 1,500% or more over time.