Write this statement down… It’s going to go down as one of the most infamous CEO quotes ever.

The pharmacy world is much more complex than just delivering certain pills or certain packages. We are not particularly worried.

The week before his comments, Walgreens plummeted 12%… CVS Health fell 8%… and struggling Rite Aid was down 17%.

The online retail behemoth made its third-largest acquisition ever when it bought online pharmacy PillPack for $1 billion on June 28.

Buying PillPack settled the debate over whether Amazon would steamroll its way into the pharmacy industry. It is.

Here at the Daily, our goal is to help you navigate Wall Street to grow your wealth and live the good life. Avoiding falling stocks is one way to do this. Playing this trend for potential profits is another. (More on that below.)

Not Taking the Threat Seriously

Pessina isn’t the first CEO of an established player to ignore new competition.

Blockbuster CEO Jim Keyes dismissed new competition in 2008. He said, “Neither Redbox nor Netflix are even on the radar screen in terms of competition.”

When Apple released the iPhone, RIM’s co-CEO, Jim Balsillie, said, “It’s kind of one more entrant into an already very busy space with lots of choice for consumers… But in terms of a sort of a sea-change for BlackBerry, I would think that’s overstating it.”

The iPhone is now the most popular cell phone… RIM is a shadow of its former self.

My point is that big players often underestimate new competition, and pharmacies are doing that right now…

We Told You About This Over a Year Ago…

In May 2017, Amazon rolled out a drug delivery service in Japan and hired a pharmacy veteran to help plan it. At the time, we warned this would threaten the existence of traditional pharmacies.

In October 2017, we told you that traditional pharmacies had dismissed the Amazon threat again. As they argued then, regulations would make it tough for Amazon to break into the business.

We told you Amazon would get around the regulations by acquiring a smaller pharmacy company.

PillPack ships drugs to every state in the U.S., except Hawaii. By buying the company, Amazon can now ship drugs to 49 states… It’s just a matter of time before drug sales become a major part of Amazon’s business.

As we told you before, the pharmacy experience isn’t a pleasant one. Most people don’t want to stand in line to get their prescriptions filled.

PillPack will make the experience better in one big way: You won’t have to go to the drug store.

It will be a huge time saver. Many consumers will start using this service soon.

Two Ways to Play This Trend

Despite all the warnings—and Amazon clearly signaled its intentions—Walgreens and CVS barely did anything to counter the threat.

As you may have guessed from the CEO’s comments above, Walgreens is ignoring it.

CVS, however, quietly established a mail-order service for refills. It costs $4.99 per prescription. That won’t be competitive against Amazon’s free shipping…

In October, I estimated that if Walgreens and CVS lost only 10% of their revenue, the companies would be unprofitable… and the stocks would become very expensive.

Wall Street is catching on. Both are near multiyear lows. 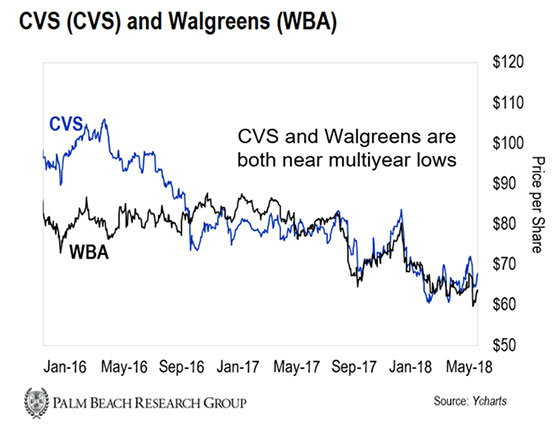 (Full disclosure: I also said to avoid online pharmacy Express Scripts. The advice was spot-on until rumors emerged that Cigna would buy the company. Cigna did buy Express Scripts for $67 billion. The reason was simple: Express Scripts has one of the best mail-order pharmacies in the country.)

Now, Walgreens and CVS have bounced a bit since the announcement. But these are deteriorating companies. So you don’t want to own them.
If you’re looking for a way to play this trend, there are two ways:

Remember, shorting is highly speculative. Always use rational position sizing and don’t bet more than you can afford to lose.

It continues to lead the market higher—and this new market should give a boost to Amazon’s stock prices.

From Bea A.: Regarding the break-up of the country… I think it’s an inevitable severing of two antithetical philosophies that have attempted to coexist in parallel for several centuries. The first idea is the right of an individual to his/her life, liberty, and property… versus the idea that someone else can force a person to turn over those rights to state control.

America is an idea, an ideal… not a land bound by physical borders. If the advantage of blockchain technology is its decentralized nature, then why wouldn’t that be the same for America. Why not have 50 or more independent states? I’d love the option of a state devoted to libertarian ideas—other than cold New Hampshire!

Just as various cryptos are now vying for investment attention based on how utilitarian they are, so could these separate states. It’s interesting to me that the same people who cheer the break-up of the European Union lament the same happening in the U.S.

Meanwhile, readers are worried about “The Great Crypto Conspiracy of 2018”…

From ML: Hi Teeka, great article on the crypto swindle taking place. Regarding the great heist that institutions are pulling on crypto investors… Won’t the institutions have the power to sway the price of cryptos in the long run because of all the money they have invested? We will be limited by what they allow in the market.

From Royston S.: Great article on the crypto conspiracy, Teeka.

A couple of weeks ago, I read an article about a new project that will speed up bitcoin transaction times. The solution would use a parallel blockchain to process smaller transactions, reduce transaction times, and reduce fees. Are you aware of this improvement, or is the claim true? Kind regards.

Nick’s Reply: Thanks for the message, Royston. The name of the project is Lightning Network. It’s a scaling solution that works on top of the bitcoin blockchain… the same way an app works on top of your smartphone’s operating system.

Teeka tells me that the Lightning Network will drive bitcoin transaction costs down to one-millionth of a penny per transaction. It will be virtually free to make transactions. You can read more about this technology in my May 28 interview with Teeka right here…

Are you concerned about political division in the United States or worried about the Great Cryptocurrency Conspiracy? Send us your questions and comments right here…

Why is Wall Street now investing billions of dollars in cryptocurrencies?

Click here to register for this event for free… (And as a bonus, learn how to get your share of the $2 million bitcoin giveaway.) 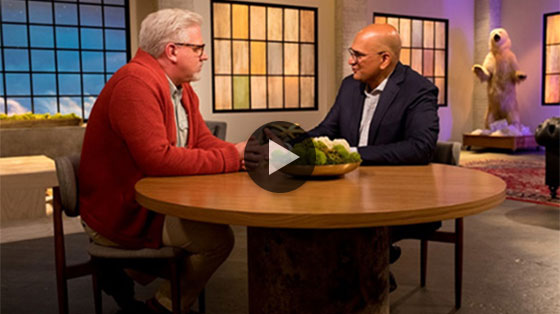