Contrary to what you might be seeing in the media, President Trump has tweeted that a trade deal with China is progressing:

Over the past month, the media have insinuated that a new U.S.-China trade deal would never happen.

For example, in September, The Washington Post ran with the headline, “Trump May Prefer a Trade War to a Deal With China.” And news website Axios published this headline: “Trump’s No-Win Trade War With the Rest of the World.”

The media have latched on to every negative thing Trump and Chinese President Xi Jinping have said.

Both men have given strong speeches to their constituencies about not giving into the other’s demands. They’ve spent so much time posturing that even I was beginning to wonder if I was right about a deal happening. (It’s lonely being a contrarian.)

But on November 1—just five days before the midterm elections were held on Tuesday—Trump said that trade talks are moving forward.

“We’ve had very good discussions with China, we’re getting much closer to doing something," the president said last Friday.

Regular readers know where I’m going with this…

In July, we unveiled our Trump Trade War Theory. We said the president’s master plan is to work out trade deals with his adversaries ahead of the midterm elections. And the goal is to help the Republican Party retain control of Congress.

We don’t know if the plan will pay off. Millions of Americans headed to polls across the country yesterday… and we expect many races to end up being tight. So it may take a few days (or weeks) before it all plays out.

But regardless of the outcome, Trump’s master plan is good news for investors…

In July, we said President Trump is using the stock market as a litmus test for his trade negotiations.

Trump knows that the media use the market as a proxy for the overall health of the U.S. economy… So he would time his trade deals for maximum effect, and help the GOP’s chances during the midterms.

So far, his plan has unfolded as we predicted.

He kept up his tough-talk rhetoric through the summer. Then, as the midterm elections approached, he started toning it down. In August and September, he signed new trade deals with Canada, Mexico, and the European Union.

We still don’t know whether his plan will be enough to save Congress for his party—that picture will begin to emerge as the final votes are tallied over the coming days.

However, we did predict the market would soar on these deals.

Now, the market didn’t soar as much as we thought. There was a major hiccup in October, and it dropped 7%—erasing most of its yearly gains. In fact, this October saw the worst monthly performance since the financial crisis of 2008 and 2009.

But if you had followed our sector allocation advice, you would have eked out a profit.

First, we said to buy industrials and consumer staples. These two sectors are best positioned to profit from increased trade. That’s because both industries do a lot of international business.

Second, we said that it was time to get out of small-cap companies. Trade wars favor small caps because they generate most of their revenues domestically. But as the trade war unwinds, investors will flee them for more profitable opportunities.

We initially suggested the small-cap iShares Russell 2000 ETF (IWM) in June 2017. We rode that trade for over a year as protectionist talk swept the nation.

And as you can see in the chart below, our later advice to get out of small caps in July of this year was the right move… 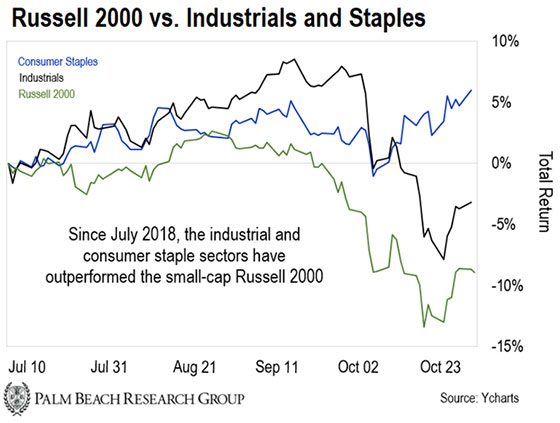 Consumer staples were up 6%, and industrials were down 3%. That gave us an average return of 1.5%. Meanwhile, small caps tumbled 9%.

And the Winner Is…

Although the midterm elections are over, our advice remains the same: Buy consumer staples and industrials. If trade talks between the U.S. and China continue to progress, these sectors will thrive.

Sure, the midterm elections are in the rearview mirror now. But the president is looking forward to an even bigger prize than Congress—keeping control of the White House in 2020.

So expect President Trump to continue working on new trade deals that benefit the economy… and that he hopes will boost his own re-election chances.

His strategy may or may not work. But investors will be winners as trade war fears that dominated the 2018 news cycle recede in the coming year.

P.S. Have you been winning from Trump’s trade war? Let us know right here…

Expect the market to continue its bullish run during President Trump’s third year in office.

That’s because of something called the Presidential Election Cycle Theory.

The theory states that stock markets are weakest in the first year following the election of a new president. That’s when the president exits campaign mode, and there’s still uncertainty around the administration.

It also states that the market is strongest in the third year of a president’s term. That’s when the president returns to campaign mode. During the third year, he promises policies to stimulate the economy to sway voters for the next election cycle.

As you can see in the chart below, the third year is by far the best-performing year of the cycle. It doesn’t matter if the president is a Democrat or a Republican… 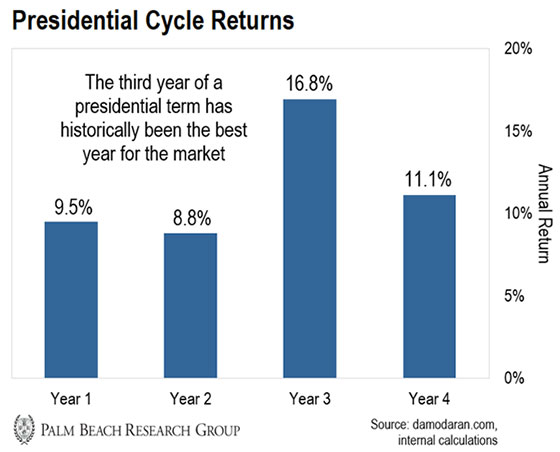 During the third year of the presidential cycle, the S&P 500 has averaged a total return of 16.8%. And that doesn’t even tell the whole story… The median return in the third year is 21.6%. So over half the time, the S&P has returns even greater than that.

Now, this is no guarantee of a higher year ahead… In 1931, the third year of Herbert Hoover’s presidency, the market crashed 44%.

Since then, the presidential cycle has entered a third year 21 times. Only two of those have been negative.

The Presidential Election Cycle Theory is one more reason to be bullish—and another reason to add new positions to your portfolio.

This Silicon Valley insider has uncovered a once-in-a-decade tech opportunity, and he believes it could send over 100 tiny tech stocks up 100%-plus… with the best ones soaring well over 1,000%.

He’s flying to our studios in Delray Beach to share all the details in a special online event tonight at 8 p.m. ET.

It’s completely free, and all attendees will get the names of four stocks on his watchlist. 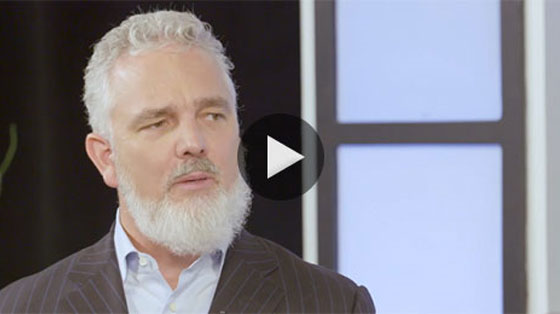