Friends… Here and now, let me tell you: 2020 is going to be an insane year for cryptocurrencies.

And unlike four years ago – when I was the lone voice predicting the rise of crypto – I’m now joined by some of the smartest moneymen in the world.

In 2016, these people would’ve called me crazy.

But after four years of trying to push this market down (while quietly investing hundreds of millions into the space), they’re about to pull off their masterstroke.

I’m talking about the mainstreaming of crypto assets.

You see, the big banks weren’t yet primed to profit from crypto. So they had to bash it.

That was just the first step. Their job was to show everyone how risky crypto was… so they could step in and “help” the world navigate this “dangerous” market.

And, of course, collect billions in fees along the way.

Now, after two years of heavy investment by some of the biggest names in banking – including UBS, Bank of New York Mellon, Credit Suisse, Barclays, and HSBC – it appears they’re about to make their move…

The bank forecasts crypto adoption will explode in the 2020s – just like internet adoption skyrocketed in the early 2000s. 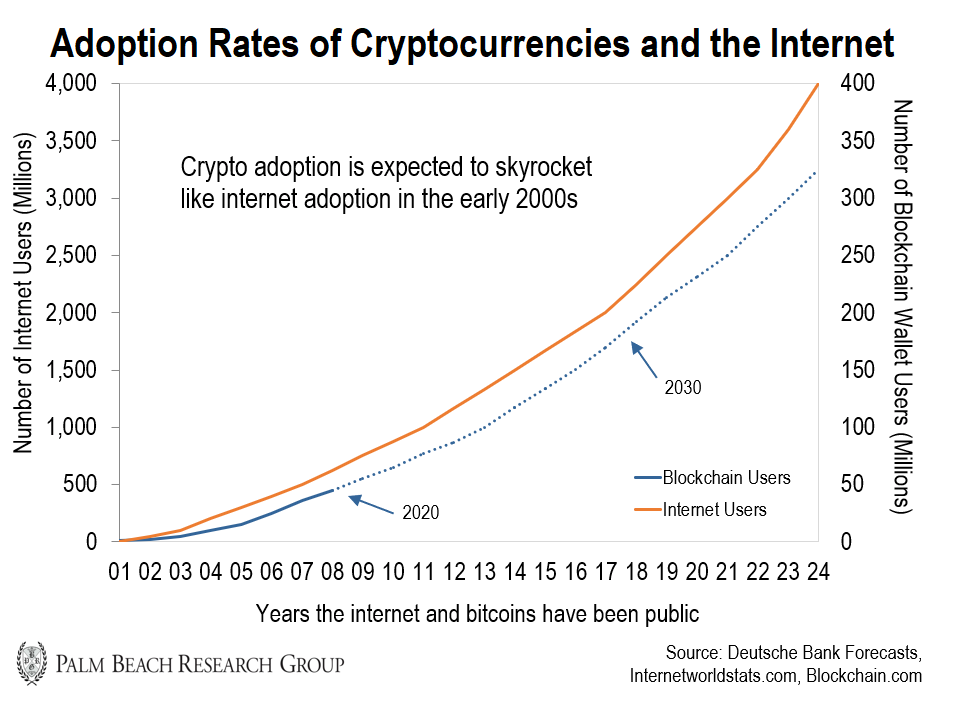 This is something I’ve been predicting since 2016. And now, Wall Street is catching up – because it can finally make money off of it.

Deutsche Bank says the main drivers behind this increase will be a move to a cashless economy… faster crypto payment methods… and the gradual erosion of value of paper (fiat) money.

This is an amazingly bullish stance coming from a financial giant with $1.5 trillion in assets tied to the non-crypto economy.

Deutsche Bank is basically telling its clients that a new asset class it isn’t profiting from yet will dominate tomorrow’s financial system.

Did it write this report out of a love of crypto assets? Heck no.

My belief is, it’s getting ready (as are many other firms) to launch a suite of products geared towards traditional stock investors looking to get into crypto.

And this makes perfect sense… On November 29, Germany’s parliament made it legal for banks to buy, sell, trade, and hold crypto assets.

Can you see the pieces starting to line up?

I hope you can… Because if history is any guide, Deutsche Bank won’t be sitting on the sidelines much longer.

Over the past year, we’ve witnessed Wall Street spend hundreds of millions of dollars building out infrastructure needed for a crypto economy.

This infrastructure will pave the way for retail products like exchange-traded funds (ETFs), crypto savings accounts, and borrowing services.

Look, I’ve witnessed what happens when Wall Street builds out infrastructure for a new asset class…

GLD made it easier for people to buy the metal. They no longer had to own physical bars. Instead, they could just buy the ETF, which represents a portion of physical gold. Today, it has over $42 billion in net asset value and has been as high as $70 billion.

So just like with the S&P 500 and gold, Wall Street will create products that make it easier for investors to buy crypto assets. And it makes a lot of sense, since there’s a lot of money to be made.

If crypto assets just mimic the size of the gold market… that would explode its market cap to $7 trillion. That’s about 29 times higher than where the value of all crypto is today.

And a handful of billionaire investors – such as former Goldman Sachs partner, Mike Novogratz – think crypto will be worth as much as $20 trillion. That’s nearly 84 times higher than where we are today.

The point is: Crypto is on the verge of explosive growth. That growth will generate tens of billions of dollars in fees. And that honey pot of fees will attract a swarm of hungry Wall Street firms…

The Gateway to Profits

As you can see, Wall Street is laying the groundwork for the biggest financial shift in history. The smartest money in the world is getting involved in cryptos.

The evidence is overwhelming. And that’s why I’m writing to you today.

I implore you to buy a small amount of bitcoin. If I’m right (and I believe I am), you won’t need much to make life-changing gains.

Bitcoin is already up nearly 20% since January 1. That’s beating the S&P 500, which is blowing past its record highs so far this year.

The bigger risk is waiting until it’s too late. Once the Wall Street machine is up and running, the biggest gains will be gone.

If you let this opportunity slip by, the regret you’ll feel will last a lifetime. I know because I still regret getting out of the 1990s tech boom too early.

Life rarely gives you second chances. Seize the one you have now and own some bitcoin before it’s too late.

P.S. Bitcoin is setting up for a huge move in 2020. But the biggest gains in crypto will no longer come from bitcoin… That’s why you need to know about “Tech Royalties.”

This is a tiny new segment of the crypto market that gives you a realistic shot at making a retirement fortune… starting with just $100. So be sure to find out about “Tech Royalties” right here.