Wall Street is pulling a fast one with investors…

And if you’re not aware, you may be falling for this trick, too…

Exchange-traded funds (ETFs) are one of Wall Street’s most popular vehicles. Most track an index or particular sector of the market.

Investors like them because they offer a cheap and simple way to buy a basket of stocks. For instance, you can buy every stock in the S&P 500 in a single security via the S&P 500 ETF (SPY).

Fund managers like ETFs because they’re easy to manage. They can just select the securities to be identical to a particular index, throw them into a single portfolio, and wipe their hands of it for a year (most indexes update once per year)…

In the interim, they’re collecting an annual management fee from you… while marketing this as an easy “solution” for retail investors.

Meanwhile, most ETF investors are asleep at the wheel while their portfolios are driving off a cliff…

One of the biggest perpetrators of this Wall Street scheme is the so-called value ETF.

[A value stock is one that trades cheaply compared to its peers based on price-to-earnings (P/E) ratios, yields, and other factors. Growth stocks are more expensive than their peers because they trade on optimistic earnings projections.]

Value ETFs are sold as a basket of companies trading cheaply. Instead, many have holdings with wildly inflated valuations.

Not only is that high by most value investors’ standards, it’s also higher the entire S&P 600, which has a 28 multiple.

[The P/E ratio is a common metric used to measure a company’s value—or how it expensive it is—relative to earnings. It shows how much an investor is willing to pay for $1 of earnings today.]

The S&P 600 also holds a good number of growth companies. These companies have greater potential for short-term returns, so they commonly trade at a higher multiple than value stocks. However, the market is so distorted right now that value stocks are more expensive than growth stocks… This should never happen

If you drill down even further, you’ll see why RZV is so expensive… Just take a look at some of the companies it’s holding:

This problem is prevalent across the ETF industry…

Even when you look at ETFs that track large-cap value companies, you find expensive holdings.

It owns gas giant Chevron (CVX) with a P/E ratio of 113. General Electric (GE) and its lofty ratio of 33 is also in there.

Yet, fund managers lazily continue holding onto them.

So, why don’t fund managers shed some of these expensive stocks from their ETFs?

Well, if they did, they’d become active managers. Then they couldn’t blame the index for any losses. It’d be their fault… And you’d take your money out of their fund.

How to Take Ownership of Your ETF

If you own an ETF, there’s a simple way to check if it’s too expensive.

Look at its top 15 holdings. If you see three or more with P/E ratios over 20, then you should consider selling it.

[Generally, value stocks have a P/E ratio below 20. Each investor has his/her own individual threshold]

In the table below, I’ve listed the top 15 holdings in RZV and IVE. I’ve highlighted the expensive (and unprofitable) stocks in both funds. (For the most up-to-date holdings, go to the funds’ websites.)

As you can see, there are more than three expensive stocks in each fund. That’s a sign that you may need to sell those funds.

Bottom line: Don’t let Wall Street lull you to sleep with passive investing. Check your fund today. You might be surprised by what you find.

Small businesses are more optimistic than they’ve been in over a decade.

The National Federation of Independent Business (NFIB) just released its Small Business Optimism Index… And as you can see in the chart below, it jumped to 106. That’s the highest it’s been since 2014. 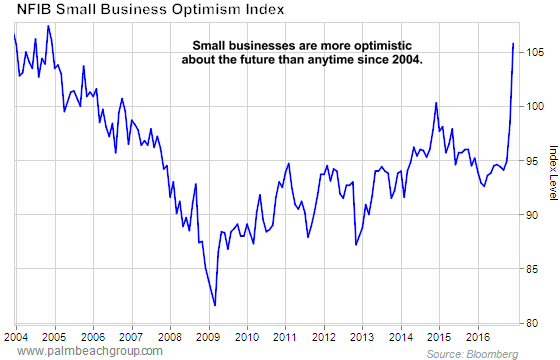 This NFIB index takes into account hiring, capital expenditures, and other aspects of small businesses. When it goes up, that means this sector is preparing for growth.

Since the election, the index is up 13%. That’s the biggest two-month move in its history.

Home Sales Falling Apart: The rate of home deals falling apart nearly doubled from 2015–16. An analysis by Trulia shows there were nearly 4% of “failed sales” in the United States. Trulia’s data don’t explain why listings reverted from “pending” to “for sale.” But PBRG analyst Nick Rokke has identified that one reason behind slowing home sales is rising interest rates.

The Case for Laundering Money: We’ve been on the front lines of the War on Cash for months now, reporting on central bankers’ attempts to ban cash. Now, they’ve enlisted another group of activists to join their cause. Per Scientific American, public health advocates say the cash in your pockets is truly “dirty money.”

In particular, they say the U.S. dollar, made from a blend of 75% cotton and 25% linen, may be more attractive to bacteria than other countries’ currency. Maybe it’s time to wash your money… Or buy some bitcoin instead.

From Michael M.: I certainly see the value of bitcoin and other cryptocurrencies. But I can absolutely see the feds banning them. And given the long arm of the U.S. government, it’s naive to believe such a ban wouldn’t happen.

Of course, they’ll cite the usual suspects as reasons for a ban: organized crime, terrorism, money laundering, drug trafficking, the general downfall of Western civilization, etc. It’s all nonsense, but that’s the government for you.

So not to be a wet blanket… but I think people should be aware of this possibility before investing too much of their savings.

Editor’s Reply: To ban bitcoin, you’d basically need to shut down the entire internet. And with bitcoin, there are no borders or central authority to control it. So a coordinated scheme to ban it would be difficult… to say the least.

That being said, governments could certainly make it more difficult to use bitcoin and thus potentially affect its price.

In terms of investing too much, we recommended that bitcoin be no more than 2% of your portfolio. Thanks for your message.

Our friends over at Casey Research have just released a special report. They say on his first day as president, Donald Trump will issue an executive order that unlocks a $128 billion fortune in Alaska. 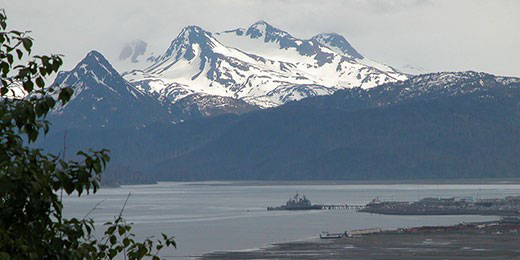