No matter what you think of President Trump, he’s on to something…

We generally don’t speak about politics in the Daily. Our focus is helping subscribers make life-changing gains. And that’s our goal, no matter who’s in office.

But President Trump put a spotlight on a topic that we’ve been investigating for months. And it’s the shady, fake news cycle coming out of Wall Street.

When the so-called “rich guys” speak negatively about the market, you must always remember that some are betting big against it, and make a lot of money if it goes down. Then they go positive, get big publicity, and make it going up. They get you both ways. Barely legal?

You see, powerful investors and bankers will say one thing in the media… but do the exact opposite with their money.

But what President Trump didn’t tweet about is how these money men are pulling it off.

Let me show you with an example…

On March 18, legendary investor Bill Ackman appeared on CNBC in prime time. He had a powerful message for Main Street: “Hilton is going to zero.”

Ackman warned that shares of the hotel chain and its peers could soon be worthless because of the coronavirus lockdowns.

Now, a warning like that is enough to spook most investors into selling. Yet Wall Street was loading up on Hilton (HLT) in its “dark pools,” or private exchanges.

You see, in 2007, the Securities and Exchange Commission opened a loophole for Wall Street when it updated its rules on electronic trading. It started off small, but now, 40% of all trading volume happens in these private exchanges.

This loophole allows Wall Street to make huge trades away from the public spotlight. You won’t find them on the New York Stock Exchange ticker tape or in your broker’s stock charts.

The day before Ackman’s appearance, trading volume for Hilton on these private exchanges was 13 times higher than average. And it was all out of public sight.

Take a look at this chart: 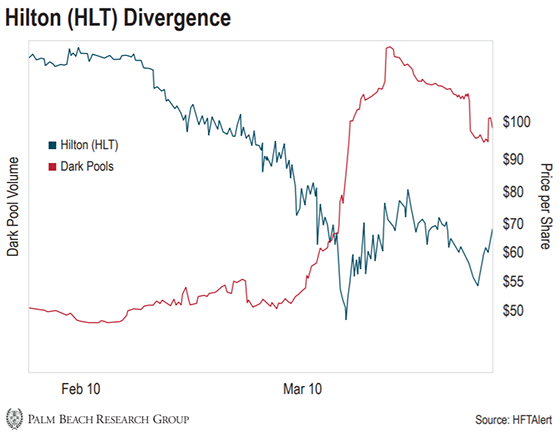 As you can see, Wall Street was snapping up shares on public exchanges. Meanwhile, ordinary investors were dumping shares on the public markets.

Of course, we can’t prove that Bill Ackman was the one buying all these shares. And he’s denied accusations that he tried to drive down the market.

But his fund, Pershing Square Capital, bought up millions of shares during this period.

What if you had known ahead of time? You could have made a killing off this trade like the Wall Street elite.

Don’t Get Angry – Get Even

Over the past three months, Daily editor Teeka Tiwari and his team have been studying this little-known data feed used by big institutional investors.

Teeka had his team compare this hidden data set against public statements from high-profile people, to see if it confirmed – or refuted – what they said.

What he discovered was shocking…

I noticed something was off in early April. At first, I thought it was just statistical noise. But I wanted to be sure, so I tasked my team to dig into the data… The first round of reviews didn’t reveal much. So I told them to dig even deeper…

And that’s when we discovered an additional source of trading data little used by individual investors. Heck, it was even little used by me – and I ran money professionally for years. This data completely rewrote our traditional data sets. That’s profound, considering some of our pricing data goes back centuries.

After digging deeper, the team’s findings were disturbing…

Until recently, I had no reliable way to catch these inconsistencies in the dark pools. On the surface, their statements were lining up with what I was seeing on the charts.

It wasn’t until I discovered this data set little used by individual investors that I was then able to put all the pieces together. What I discovered was this data made up 40% of the trading in stocks. But that 40% is NOT reflected in the charts and data feeds you and I rely on.

Now, Teeka says you can spend your time getting angry at Wall Street for being greedy.

The best way to get even is to turn the tables on Wall Street.

That’s why Teeka has spent months developing a system to track these private data feeds. It’s like a lie detector. And it offers the chance for investors to make an average of $19,740 on each trade.

Last Thursday, he revealed the details of his new system to over 12,000 viewers. But time is running out to watch the official replay of his special webinar.

It’s going offline tonight at midnight. So click here to watch it, before it’s closed for good…