As I write this, you’re being robbed… you just don’t know it.

And the culprit is inflation.

Inflation is the silent killer of retirement. It slowly eats away at your dollars and shrinks your savings before you know what’s happening.

And thanks to the government’s reckless money-printing, it’s only getting worse.

We’re now seeing an annual inflation rate three times higher than what we experienced over the last decade.

Over the last decade alone, your money has lost 20.1% of its purchasing power.

Yet that is the damage done by relatively tame inflation – roughly 1.8% a year. And we’re now seeing an annual inflation rate of 5.4% – three times as much as what we experienced over the last decade. 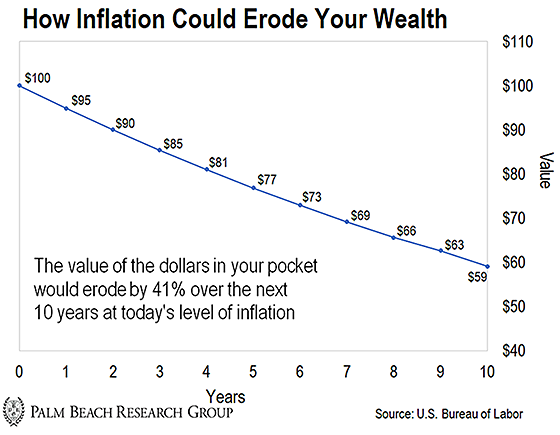 At this pace, you’ll lose 41% of your wealth over the next decade.

But at the current rate of inflation – as measured by the U.S. government’s own gauge – you stand to lose a staggering 41% of every single dollar’s purchasing power over the next decade.

If that isn’t highway robbery, I don’t know what is.

Cryptocurrency Is the Future of Money

That’s a $1.5 million gap. And it doesn’t even account for inflation.

So most Americans have an even deeper hole to dig out of just to reach the basic standard for a comfortable retirement.

That’s why I’ve been recommending alternative investments like bitcoin and altcoins for the past five years.

As I’ve explained many times in the past, the Federal Reserve can print as much money as it likes… but no one can make more bitcoin.

In fact, the supply of bitcoin is strictly limited and hardwired right into its code.

This is precisely why bitcoin has wildly outpaced any other currency or investment you can think of over the past decade.

Smart people realize it’s one of the best ways to protect – and actually increase – their purchasing power in the face of money-printing and rising inflation.

But you don’t have to take my word for it…

An incredible 76% of them believe digital assets will serve as a strong alternative to – or outright replacement for – fiat currencies in the next 5–10 years.

These executives are some of the wealthiest and most-connected people in the world.

And they’re saying assets like bitcoin will replace fiat currency.

This is something I’ve been predicting for years. And it’s finally coming to pass.

If you need a better illustration of this phenomenon, take a look at this recent tweet from Alex Gladstein, a bitcoin advocate who works for the Human Rights Foundation. 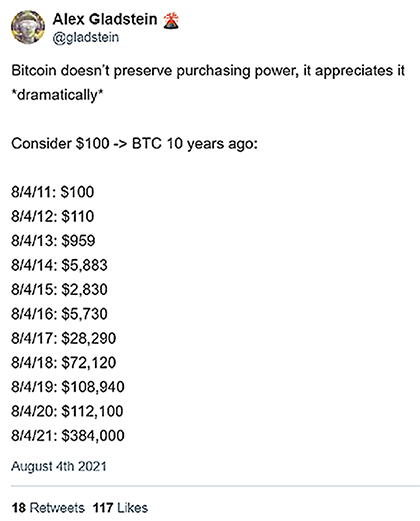 In my own portfolio, I first recommended bitcoin back in April of 2016. And we recommended ether at the same time.

They have since returned 12,394% and 38,078%, respectively. Those gains are high enough to combat some of the worst bouts of hyperinflation in history.

But some altcoins do even better than that…

A Faster Way to Retirement Riches

If you’re behind on your retirement plans or your financial goals…Or if you’re looking for a way to catch up… You must consider what I call “Catch-Up Coins.”

Less than 1% of people realize they exist… And yet, one Catch-Up Coin alone can represent an entire lifetime of wealth creation.

If you missed out on those gains, you now get a second chance…

And it’s all thanks to an unprecedented event in the crypto market I believe will trigger a Hyper Boom in these coins… sending them higher than anyone today can imagine.

During the event, I’ll explain why these six “Catch-Up Coins” are the very best I’ve ever discovered. Plus, I’ll give out the name of my No.1 “Catch-Up Coin” absolutely free – no strings attached – to those who attend.

(It’s a coin I have never publicly revealed before.)

I’ve given away 10 tokens at events like these – each a winner. And if you showed up just for the free coin, you could’ve made an average of more than 17 times your money.

So just attending this special event with me could be the best investment you’ll ever make.

Friends, in my opinion, the world’s central banks are undertaking one of the greatest thefts in human history.

And it doesn’t take a PhD in economics to understand that the more money that goes into circulation, the less buying power each dollar has going forward.

It means your buying power is eroding at a rapid rate… It means retiring comfortably will be much, much harder than it already is…

And it means you should be flocking to assets that can bridge the gap between the financial life you have… and the one you want. And on Wednesday, September 15, at 8 p.m. ET, I’ll show you exactly how to do that.

P.S. In addition to getting my No. 1 Catch-up Coin during the Hyper Boom event… you can also receive my complimentary bonus report if you become a VIP.