Nick’s Note: Cryptos are catching some exciting attention in the mainstream news. But at the Daily, we don’t follow the crowd (in fact, the crowd has followed us into this trend)… We do our due diligence before jumping into any investment.

In 1969, the International Monetary Fund (IMF) created them to supplement gold and the U.S. dollar as international reserves.

The SDR consists of a basket of national currencies. And the currencies in the basket are the elite of the elite: the U.S. dollar, euro, Japanese yen, and British pound.

On October 1, 2016, the IMF added the Chinese yuan to this elite group. (The Chinese Communist Party also calls the yuan the “renminbi,” or “people’s money.”)

The yuan took a major step by becoming an “international reserve currency.”

Experts predict adding the yuan to the SDR basket could attract trillions to the currency.

Hayden Briscoe is the managing director at asset manager AllianceBernstein.

He told CNBC that the addition of the yuan “should help underpin China’s continuing efforts to internationalize the currency and its capital account… [which] could lead to inflows of up to $3 trillion over the next few years.”

Meanwhile, Morgan Stanley expects inflows to top $2 trillion over 10 years. Most of that money will come from foreign exchange traders.

Here’s why I’m telling you about the SDR and the yuan.

Last month, the head of the IMF raised the prospect of adding cryptocurrencies (like bitcoin) to the SDR.

On Monday, we showed you that Fidelity Investments was adding a digital currency exchange to its website. That could make the exchange potentially available to its more than 26 million individual investors.

That’s just the tip of the iceberg compared to the IMF. Let me explain…

Christine Lagarde is the chief of the IMF. And if she has her way, bitcoin could become a part of this elite basket of currencies.

In late September, Lagarde said at a conference hosted by the Bank of England that it’s “not a far-fetched hypothetical” to see bitcoin added to the SDR.

And yet, why might citizens hold virtual currencies rather than physical dollars, euros, or sterling? Because it may one day be easier and safer than obtaining paper bills, especially in remote regions. And because virtual currencies could actually become more stable […]

I am convinced that the IMF has a strong role to play in this respect. But the Fund will also have to be open to change, from bringing new parties to the table, to considering a role for a digital version of the SDR. [emphasis added]

This is very bullish news for bitcoin and cryptocurrencies in general…

The IMF has 189 member countries (see map below).

As you can see, that’s almost the entire world.

The IMF has nearly $300 billion in SDRs. That’s money that member states can use to supplement their official reserves. If bitcoin were added to the SDR, that’s potentially billions of dollars of new demand that could pour into cryptocurrencies.

So not only will we see institutional investors buying bitcoin… but national governments adding bitcoin-denominated assets to their reserves, too.

A Piece of the Global Monetary Pie

The yuan makes up a little under 11% of the SDR. And experts forecast $2–$3 trillion will flow into that currency now that it’s in the basket.

By my back-of-the-napkin calculations, if the IMF adds bitcoin to its basket of elite currencies… we could see bitcoin attract $200–$300 billion over the years.

P.S. I’m so bullish on bitcoin that I’m buying $1 million worth and giving it away as part of a special event I’m calling “The $1 Million Dollar Bitcoin Giveaway.” Everyone who attends will have a chance to claim their portion of this money. Just think of it as a “seed” investment in bitcoin.

This Commodity Is Setting Up for a 15% Rally

After months of consolidating—at horribly depressed prices—it looks like sugar is ready to spike higher.

I’ve been bullish on sugar since April. And, frankly, I’ve been wrong on the trade. Sugar is trading down 15% since I turned bullish on it. But, it looks like the trade is finally ready to turn.

Take a look at this chart… 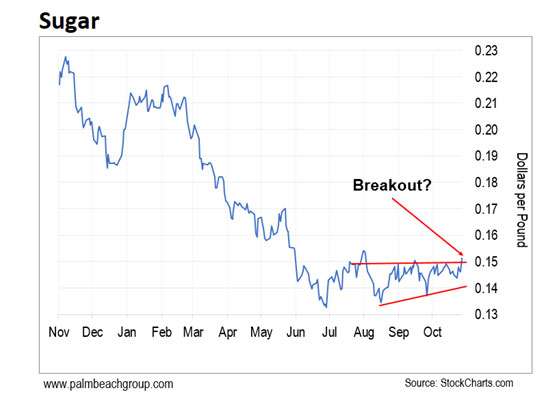 It looks like sugar just broke out to the upside of an ascending triangle pattern. This is a bullish pattern that forms as a chart makes a series of higher lows, while also bumping into the same resistance area. The more times resistance is tested, the weaker it becomes, and the more powerful a breakout can be once it finally happens.

If this is a genuine breakout for sugar, then the price should approach the May high of $0.165 within the next few weeks. That would be a 15% gain from yesterday’s closing price.

Adding to this bullish setup is the current actions of commercial traders—also known as “the smart money.”

Commercial traders are the producers of sugar, the banks that finance sugar businesses, and the institutions that are already dependent on the price of sugar. They usually use the commodity futures market to hedge against a price decline. So, they almost always are net short sugar futures contracts.

Right now, the smart money is net long sugar contracts. And, they’re net long more than at any other time in the past 20 years.

Meanwhile, the small traders—aka the “dumb money”—are net short sugar futures contracts more than at any other time in the past 20 years.

I’m not looking for that large of a move this time around. But a challenge of the mid-May high sure looks like a good target for this breakout.