That’s the ear-splitting sound made by your old dial-up modem. You remember the one you connected to your computer? (Click here to refresh your memory.)

The dial-up modem was a frustrating technology.

If someone called you while you were surfing the web, you’d lose your internet connection.

Here’s why I’m telling you about dial-up modems…

Although they were groundbreaking, dial-up modems were a roadblock to widespread internet adoption.

That’s because they were unable to scale. In other words, you couldn’t make them faster.

Eventually, broadband cable solved this problem. It offered speeds up to 200 times faster than dial-up modems.

Regular readers know I’m bullish on bitcoin. Since I recommended it in April 2016, bitcoin is up 540%.

But over the past couple of weeks, we’ve seen a pullback. That’s due to growing pains.

You see, bitcoin is a victim of its own success. Increased volume has overwhelmed the network and slowed down transactions.

On August 1, that’s all changing. A new solution could quadruple the number of transactions bitcoin can handle.

Most of you probably remember how slow dial-up modems were. They had a top speed of 56 kilobits per second.

In 2000, hardly anyone in the United States had broadband cable in their homes. By 2016, that number had grown to over 70% (see chart below). 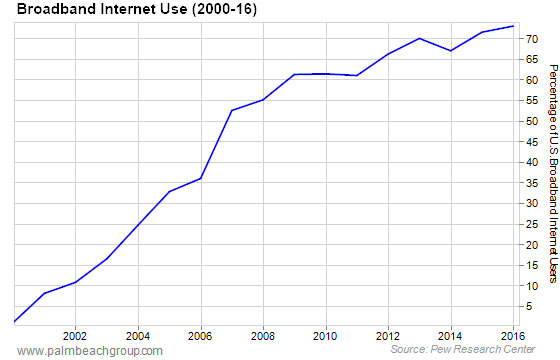 During that span, internet usage among Americans increased from 43% to nearly 75%.

As you can see, the ability for the internet to scale in speed was key to the adoption of the technology.

Back in March, I told you there was a schism in the bitcoin community on how best to scale the network. I called it the “nerd war.”

In short, there are two development teams working on solutions to the scaling problem. There has been a lot of uncertainty about whether they can come to an agreement.

As of now, more than 80% of the “miners” (the folks who provide the hardware that bitcoin runs on) have signaled their support for the SegWit2x code.

If all goes well, this code change will lock in on August 1.

Even better, Segwit2x paves the way for bitcoin to add scaling technologies that allow hundreds of thousands of transactions per second.

That would put bitcoin on par with other payment platforms like Visa and PayPal, which can handle thousands of transactions each day.

Assuming the SegWit2x solution is successful, bitcoin’s adoption could explode the way internet adoption exploded with the advent of broadband cable.

We could be witnessing the birth of bitcoin’s own “high-speed cable modem” moment.

A Flood of New Money

Once the uncertainty surrounding the code change passes, we could see a sea of new money flood into bitcoin.

Not only will bitcoin benefit… we think the entire cryptocurrency space will soar right along with it.

As more users come into bitcoin, they’ll naturally diversify into other coins. Our bet is that the entire cryptocurrency ecosystem could soar 10 times from here.

The time to act is now… before August 1.

If you’ve been on the fence about buying bitcoin, think about this: This might be your last chance to buy bitcoin for under $3,000 per coin.

Remember, you don’t have to own a whole bitcoin. You can just own a fraction of a coin.

Get your feet wet and own a little bit. Because if we’re right about the scaling debate, then even a small position could end up moving the needle on your wealth.

Investors have never been this fearless about the markets…

Regular readers are probably familiar with the volatility index (VIX), commonly referred to as the stock market’s “fear gauge.”

The VIX just hit an all-time low this week. That means investors are confident.

But there’s another fear gauge that you may not have heard of. And it’s also signaling calm in the markets…

As you can see in the chart below, bond investors expect more stability. 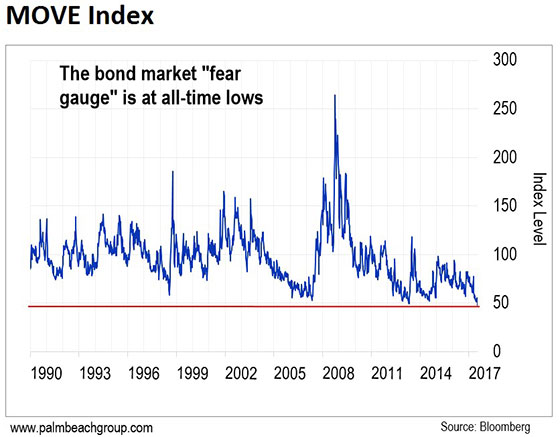 As long as the MOVE Index stays low, we have nothing to fear in the markets.

From Kevin M.: In the July 21 Daily (“The Surprising “Secret” Behind This Couple’s Crypto Fortune”), Teeka asked if we are as cool as a cucumber or sweat every price movement…

Why was I able to tolerate the volatility? Because I pay for newsletters to get my information.

Over the past two years, I’ve learned to hold gold through temporary volatility, and until the end of the gold cycle. Then I sell half my position when gold is overloved.

Paying for information has been my secret for gold investing. Now, I’m applying the same wisdom to cryptocurrencies. I fill my buckets and only casually check on them.

Nick’s Note: With the August 1 bitcoin scaling deadline approaching, what steps do you plan to take to remain “cool as a cucumber”? Let us know right here…

It involves a situation he’s discovered in the investment world that could be a threat to your financial livelihood… But it could also make you 10 to 20 times your money. Check out his must-see presentation before it ends tonight… 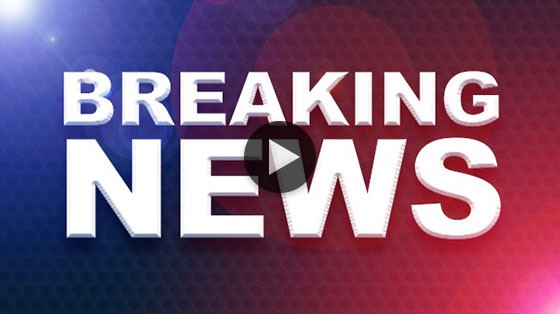