Bitcoin is down 50% from its highs…

In any other market, this would be huge news. If you woke up tomorrow and stocks were down 50%… it would be on the front page of every newspaper in the world.

Every talking head on TV would be predicting an economic meltdown… and politicians would be in front of the camera urging calm.

But in the world of crypto, it’s just another day.

If you’re new to crypto, I can see how you might be freaking out right now. I know from my own experiences it’s easy to lose sight of where we’re going when the market doesn’t behave the way we want it to.

These lulls are an important part of the overall bull-market process. I call them the “Mid-Cycle Blues.”

All financial markets deal with Mid-Cycle Blues. It’s easy to confuse these periods as a shift to a bear market.

Today, I want to show you how I’ve navigated mid-cycle corrections like this before.

More importantly, I’ll tell you how I was able to tell the difference between a mid-cycle correction and the start of a brand-new bear market. 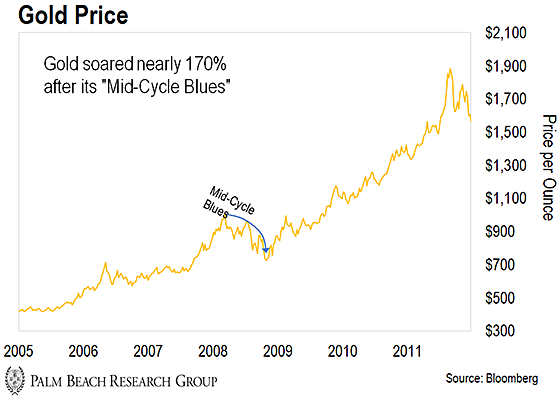 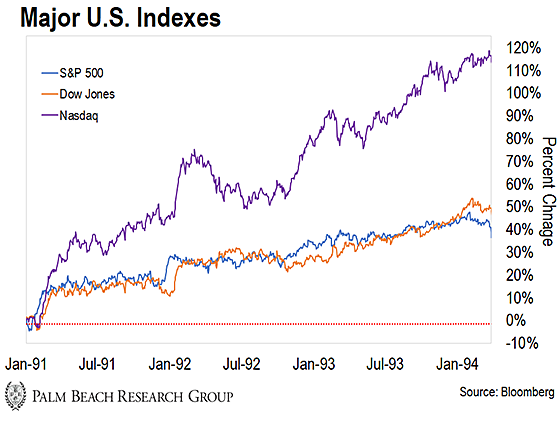 Then between 1994–95, these markets went nowhere. It was one of the most frustrating periods of my life as a wealth manager. 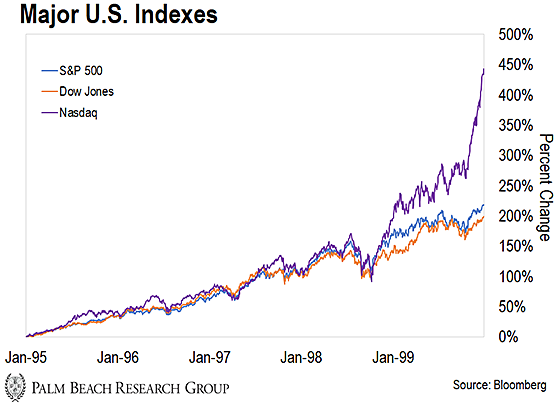 It bears repeating: All big bull markets have mid-cycle phases.

So how do we know crypto is going through a mid-cycle correction and not a new long-term bear market?

It’s different for each market. Back in 1994–95, you had to look at the adoption rate of the PC and the internet. It was minuscule, with just 24% of households owning a computer and less than 40 million people online.

The bet savvy investors were making back then was that adoption rates would dramatically rise… And they did.

By the end of the decade, 51% of households owned a PC, and 360 million people were on the internet.

That 94–95 period is most like what is going on today in crypto.

The adoption of crypto assets is tiny. It’s just 125 million people out of a total addressable market of more than four billion smartphone owners.

But according to fintech analytics company Portfolio Insider, the current bitcoin adoption rate has been outpacing the internet’s user growth rate and will reach 1 billion users in the next four years.

So the logical question to ask is, has this volatility slowed the rate of crypto-asset adoption?

When it comes to crypto, that’s the key question you always want to be asking yourself.

If companies were shelving their plans to offer crypto as they did in the early stages of the 2018 “Crypto Winter” bear market… I’d be concerned.

But they aren’t slowing down at all.

As I type these words, virtually every major investment bank is opening up its respective customer bases to crypto investments.

According to a survey of 1,100 institutional investors by Fidelity Digital Assets, 70% said they expect to invest in or buy digital assets in the future.

Last month, a16z announced it raised $2.2 billion for its Crypto Fund III, the most money any crypto fund has ever raised. Founded in 2009, a16z is a U.S. venture capital firm that also goes by the name Andreessen Horowitz – after its namesakes Marc Andreessen and Ben Horowitz.

And companies like MicroStrategy, Tesla, and Square, have invested a combined $4.4 billion into bitcoin since August 2020.

The IRS, the Office of the Comptroller of the Currency (the agency that regulates banks), the CFTC, and the SEC have either already – or are preparing to – put in place a regulatory framework for the wider spread crypto-asset adoption.

What this means is that adoption of crypto assets will explode higher from here.

And that means rather than being at the beginning of a new bear market, we’re simply stuck in the “middle phase” (the Mid-Cycle Blues) of a much larger adoption trend.

What Does This Mean to You?

I know sitting through these mid-cycle selloffs is about as much fun as getting a colonoscopy. Sure, your doctor tells you it’s a vitally important test… But who the heck wants to go through one?

It’s unpleasant and uncomfortable. You’d love to avoid it, but there’s no easy way around it.

So, welcome to your crypto colonoscopy.

It’s a vitally important process you must go through if you want a shot at owning a life-changing asset.

There’s no shortcut. No one can perfectly time these mid-cycle selloffs.

But you don’t need to.

If you get the big trend right – and are smart enough to get in early and have the guts to hold on – the trend will take care of the rest.

Friends, no one knows the exact date when this mid-cycle selloff will end. All I know is it will end.

I’ve given up trying to answer the unknowable. I’ve built my wealth by getting the big picture right… position sizing smartly… and holding on for dear life (HODLing).

It’s not a particularly fancy strategy, but it’s very effective.

So stay focused on the adoption story.

And so long as it continues to play out… you can rest assured that prices will rise much, much higher from here.

P.S. While the Mid-Cycle Blues have caused a short-term pullback in bitcoin’s price, crypto mass adoption is fueling a $30 trillion blockchain revolution…

And once these small projects take off, your chance at life-changing returns will be in the rearview.

Click here to learn more about my “No. 1 Investment of the Decade” and how it could be as rewarding as buying Microsoft in the ‘80s… Amazon in the ‘90s… and bitcoin in 2010.