And if it’s anything like in the past, there will be a lot of short-term pain before the market’s long-term recovery.

The original Black Monday was October 19, 1987. That’s when the Dow fell by 22% – the largest one-day percentage drop in its history.

At the time, tensions between the United States and Iran were escalating. The Persian Gulf was a tinder box.

Throw in increased oil prices, interest rates, and inflation… and the market was ripe for a swift, brutal crash.

Many investors couldn’t cover those losses. That led to the forced liquidation of their positions. And forced selling begets lower prices… which begets more forced selling.

It was a vicious cycle… 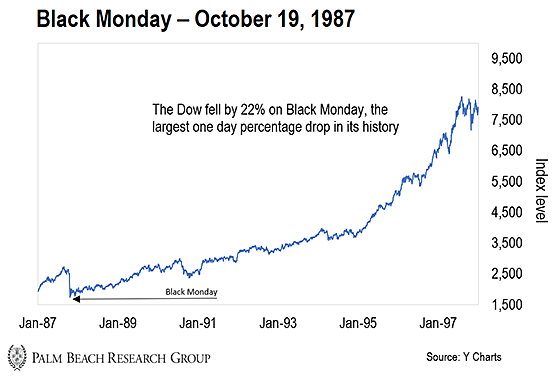 Here’s the thing about Black Monday…

While the crash was painful, it was short-lived. Just like a violent thunderstorm that rumbles through on a sunny day, these sell-offs don’t last long.

As you can see in the chart above, it only took the Dow 19 months to recover and take out its old highs. That may seem like a long time…

But today, Black Monday is just a tiny blip on the chart. 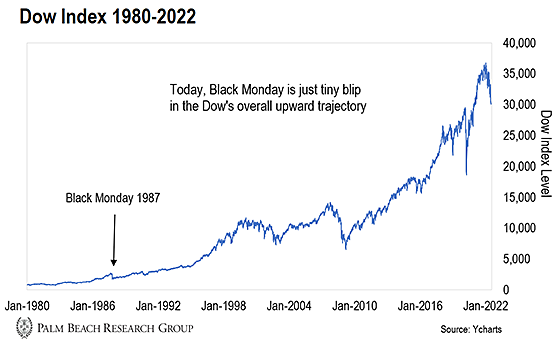 A “Black Monday” for Crypto

On Monday (June 13), we saw bitcoin and Ethereum drop 18% and 20%, respectively. It was the biggest 1-day drop for the two blue-chip cryptos since December 2021.

Just like in 1987, crypto and equities are getting pounded by rising oil prices… interest rate hikes… sky-high inflation… and geopolitical uncertainty.

And the brutal sell-off is leading to forced liquidations.

Since crypto is much more volatile than equities, the forced liquidations are greater.

That’s because there are a lot of investors in the market taking incredible risks to get rich off crypto. Some are using 10–20 times leverage on their bitcoin positions.

Leverage is great when asset prices are going up. You can make a killing. But on the way down, it’s like a house of cards. Forced liquidations from leveraged traders causes prices to collapse.

That’s what we saw Monday when bitcoin and Ethereum got wiped out.

But while those investors watch their leveraged positions crash… there’s another group of really smart and crazy rich investors. And some of them have billions of dollars at their disposal.

What do they do when they catch wind of these massive, long leverage positions?

They just smack down bids or go short. They crush the leveraged longs. And when they push down the price… they can swoop in and increase their bitcoin stack on the cheap.

Meanwhile, the trading firms providing leverage to the longs start to panic. And as soon as they see the bid collapse… they close out their customers’ trades.

This creates a vicious, self-perpetuating cycle that doesn’t stop until it burns itself out.

That’s why you can see massive 10–50% drops in bitcoin in such a short period of time.

Now, I don’t know when this forced selling will end. No one does.

But I believe we’re getting closer to a bottom. And the rip higher will take months – not years.

That’s why I say thank goodness there’s a segment of the global population careless enough to trade bitcoin with massive leverage.

They give long-term holders like you and me the opportunity to buy more bitcoin at great prices.

If you’re like me and believe bitcoin will trade at $500,000 within the next five years… then buying it at these prices is an incredible gift.

Volatility: The Gift That Keeps on Giving

Friends, it bears repeating: Assets poised for massive growth in their early days are highly volatile before that happens. So volatility is the price of admission for life-changing gains.

You can’t expect huge 100x swings to the upside without downside volatility.

Look, crypto is a mental game. This market will have your emotions ping-ponging like you can’t imagine. So you must be mentally prepared.

And unless you’re an experienced trader, please don’t try to trade around this volatility.

The last thing you want to do is get out of the market looking to sidestep a 25% drop… and end up missing a triple- or quadruple-digit gain instead.

I experienced this when I was a young executive on Wall Street and sold out of Microsoft and Oracle too early.

I thought I was brilliant to sidestep a 15% or 25% loss. Sure, I felt like a rock star at first. But I looked foolish later because I missed 50–100x gains.

That’s the type of regret that really eats away at your soul. I experienced that kind of regret in the 1990s with so many life-changing ideas. I don’t want you to feel it too.

Assuming it makes sense for your personal financial needs, consider buying more bitcoin during these sell-offs…

Because crypto’s Black Monday will look like a blip on the chart five years from now.

P.S. The crypto pullback is creating incredible bargains in previously inaccessible corners of the market.

That’s why I’ve put together a presentation highlighting one of those sectors… one estimated to grow nearly 38,000% in the years ahead.

Because when crypto eventually rebounds, the bargains we’re seeing today will be few and far between.