Recently, I sat down with cryptocurrency pioneer and bitcoin millionaire Charlie Shrem.

Charlie has been integral to the growth of bitcoin. He is a widely respected authority on all things bitcoin related.

In 2011, while he was still in college, Charlie founded a company called BitInstant. At its peak, BitInstant handled 30% of all bitcoin transactions.

Charlie started BitInstant to help unhook people from the banking system. His company allowed people to instantly send funds anywhere in the world for fractions of a penny.

Teeka Tiwari: Friends, we are honored to be joined by a true bitcoin pioneer—a gentleman by the name of Charlie Shrem. Thank you for joining us, Charlie.

Charlie Shrem: Thank you for having me.

Teeka: First question: What is the risk of the government shutting down cryptocurrencies?

Charlie: Bitcoin is a global system, not just in the United States. The beauty of the system is you don’t really need anyone’s permission to use it.

So regulation or no regulation, if you’re holding bitcoin in your own wallet, no one can take it away from you.

All bitcoin is is “cash with wings.” It’s the ability to move value from one person to another around the world, instantly.

Teeka: “Cash with wings” is a great term. I love it. Can you tell readers what that means?

Charlie: Sure. The problem with trying to explain bitcoin to people is that it’s so complicated. That’s why I like to use analogies and bring it down to the most basic level.

Money is virtual. Only about 8% of the world’s money is actually physical cash. People can’t fathom that reality.

Now, when I want to send a bank transfer, use a credit card, or write a check, I need someone’s permission.

Everyone is involved—the bankers, the compliance department, my credit card company, the guy who works for customer support. They all have my payment history.

There are tens of thousands of people who have access to my spending habits in real time. That’s scary. That’s really scary.

The only other option I have is cash… But cash can be difficult because I can only spend cash as far as my arm’s length.

We could be standing in a room with the door closed and no windows… and if I hand you cash, no one in the world will ever know that transaction ever took place.

So cash is private. But it’s limited by proximity.

Bitcoin is also private. The difference is you can instantly send bitcoin anywhere in the world. Bitcoin is cash if it had wings.

Teeka: Great explanation. Okay, next question: What are some other new crypto projects you’re seeing?

Charlie: I actually love these new crypto projects. I’m involved in many of them, like Dash, which is like bitcoin but has a different governance system.

I know a guy who built a smart contract for airplane flights. You could send money to [a blockchain] address and you input your flight information. And if your flight is delayed or late, the smart contract will automatically send you money back. Just like insurance.

And it’s completely automated. It’s all built on blockchain technology. You don’t have to trust anyone.

Projects like these are doing the guerilla marketing for the bitcoin system.

People are buying into the new project first… And then they eventually get into bitcoin because it’s all based on bitcoin technology. Bitcoin is like the mothership.

Teeka: A lot of people don’t trust bitcoin because it’s not tangible. How do you reassure people who are skeptical of cryptocurrencies?

Charlie: That’s a good question. And I totally understand that.

We’re in this new technology age where everything is on the internet or in the cloud that you can’t see… You can’t feel it. And it freaks you out a little bit.

They’re made of brass, silver, or gold. And underneath the coin is your bitcoin private key.

And by owning that coin, you actually own physical bitcoin.

I’ve given them as Christmas gifts to friends and family when bitcoin was at $10. Now, bitcoin is worth over $1,700—and I’m like, “Can I get it back?”

Teeka: So is bitcoin better than a gold coin at this point?

Charlie: Today, one bitcoin is worth more than one ounce of gold. So yes.

Charlie: Gold is great. There’s about $8 trillion in the gold market. But bitcoin could be much more valuable than gold in the future.

The whole bitcoin market cap is about $20 billion. That’s like 0.025% of the gold in circulation.

If just 0.05% of people who own gold buy a little bit of bitcoin, that would double bitcoin’s price…

Eventually, individuals, corporations, banks, and finally governments—in that order—will start taking small positions in bitcoin as a hedge or some sort of reserve currency.

And once that happens—oh, the sky is the limit. I can’t even fathom what the price would be.

Teeka: How high do you think it could go?

Teeka: I always tell subscribers that bitcoin is a good asymmetric bet. That means you only need to invest a couple hundred dollars for a chance at life-changing gains. Your downside is capped but your upside is limitless.

How much do you think a person should invest in bitcoin?

Charlie: You don’t need much. So don’t bet your retirement.

Teeka: We really appreciate it, Charlie. You’re one of the brightest minds in this space. You just provided a lot of value.

It’s a classic case of “buy the rumor, sell the news.”

He defeated far-right populist Marine Le Pen, who wanted to hold a referendum on France’s membership in the European Union and the euro currency.

In the run-up to Sunday’s vote, investors placed bets that a Macron win would be good for the French economy.

But as you can see from today’s chart, after news of Macron’s victory on Sunday, the French market was down nearly 1% on Monday. 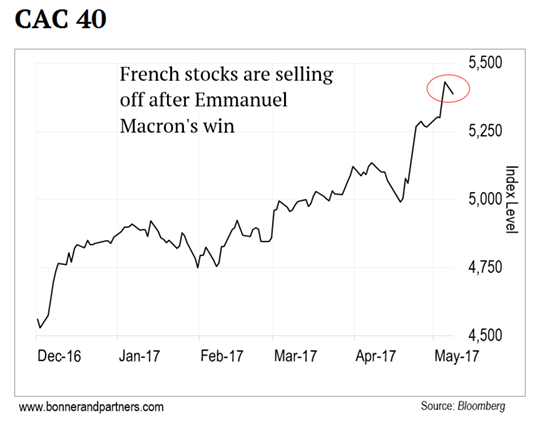 It is an important lesson for anyone tempted to “trade the news.”

By the time a piece of news breaks, it is already fully expressed in stock prices.

And all the gains to be made have already been made by investors who placed their bets ahead of the event.