“We will not stand for this. Watch!”

That was from one of President Trump’s latest tweets.

But the warning wasn’t for North Korea, Syria, or Iran.

Trump was putting Canada on notice.

Last week, we told you the trade skirmish between the U.S. and Canada over dairy products had the potential to erupt into a full-scale trade war.

All the signs are pointing to that.

In Tuesday’s Palm Beach Daily, we wrote don’t “be surprised if President Trump jumped into the fray between Canada and U.S. dairy farmers.”

Canada has made business for our dairy farmers in Wisconsin and other border states very difficult. We will not stand for this. Watch!

On April 20 (“Blame Canada for This New Front in the Global Trade War”), we predicted something like this would happen. Here’s what we wrote:

But don’t be surprised if we see tariffs imposed on Canadian maple syrup or a reinstatement of the tariff on Canadian lumber.

Well, the U.S. has now retaliated against its largest trading partner.

And it’s just the latest example of the overall unraveling of world trade. It’s a theme we’ve followed for months in the Daily.

Whether you’re looking to make money off the winners of this trend… or avoid losing money on the losers… you’ll want to stay abreast.

If you’re just tuning in, here’s a recap of what’s going on…

Canada said it imposed the tariffs on American-produced milk because the U.S. government subsidizes milk producers.

And he did on Tuesday, announcing the tariffs on Canadian lumber. Lumber is one of Canada’s biggest exports.

Canada denounced the measure and has threatened to sue the U.S. over the tariffs.

The fight is getting ugly. U.S. Commerce Secretary Wilbur Ross said, “It has been a bad week for U.S.-Canada trade relations.”

It’s been an even worse time for global trade…

And those movements are coinciding with a decline in world trade. As you can see in the chart below, it’s dropped for the past four years in a row. If this trend continues, multinational companies could be some of the biggest losers.

Any business that relies on exports will take a hit in this anti-globalist environment.

Meanwhile, look for companies that do most of their business domestically to thrive.

One place to start is our America First Portfolio. It’s stocked with 11 U.S. companies that do most of their business at home.

P.S. At the end of next month, I’ll be touring the Rust Belt states of Illinois, Indiana, Michigan, Ohio, Pennsylvania, New York, and even Ontario, Canada. I want to get a firsthand look at the trade war from the front lines. And I need your help…

If you live in one of these states, I want to know how President Trump’s “America first” policies are affecting you and your community. No story is too small and no industry is too insignificant. You never know. I may stop by and have a cold one with you… Send me your stories right here.

Bitcoin is on a tear again…

On Monday, the U.S. Securities and Exchange Commission (SEC) said it would reconsider a proposal to create a bitcoin exchange-traded fund (ETF).

Last month, the SEC rejected the ETF, which would have given investors an easy way to invest in bitcoin.

The commission’s review of its decision has sent the cryptocurrency higher. As of Wednesday, bitcoin traded as high as $1,305… just shy of its record. Bitcoin’s rise acts as a tailwind for other cryptocurrencies. So we should see many of them rise as well…

P.S. My colleague, Teeka Tiwari, has hand-selected seven of the most explosive cryptocurrencies to put in his Palm Beach Confidential portfolio.

Right now, the bundle is up an average of 130.7%. You can learn more about Teeka’s crypto basket right here.

Blockchain Going Global: The United Nations (UN) is jumping on the blockchain bandwagon. The UN is using the technology for a humanitarian project. Right now, the agency sends rupees to more than 10,000 Indians who need aid. The goal is to expand the number to 500,000 people by 2018. More importantly, the UN would like to replace rupees and any other state-issued currency with cryptocurrencies for their aid programs. It’s just more evidence that the blockchain is becoming mainstream. You can read more about this project right here.

Trump Is Back at the Plate: In his first two times at bat since joining the major leagues, longtime PBRG friend Bill Bonner says President Trump has struck out. The first time, he whiffed at repealing and replacing Obamacare. The second time was on foreign policy, when he joined the Deep State’s war machine. Now, Trump is up to bat again. And Bill says the pitcher has thrown Trump another curve ball—this time, tax reform. If Trump can hit a grand slam, it may save the economy. But Bill believes “The Donald” is more likely to strike out…

Palm Beach Confidential editor Teeka Tiwari has been flooded with questions about cryptocurrencies.

As a free service, he’s answering your questions during a live Q&A tonight at 8 p.m. ET. And he’s giving everyone who attends the chance to claim $100 of actual bitcoin.

He can’t give personalized investment advice, but he’ll answer any general questions you have. Follow this link to join this LIVE event tonight… 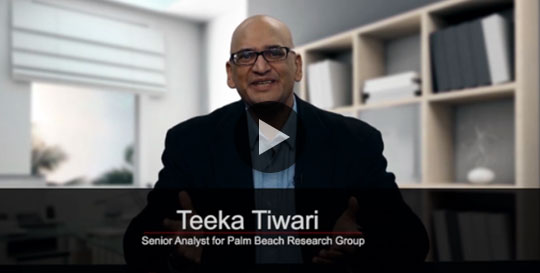