Have you seen the Netflix documentary about contemporary artist Banksy?

Then, hidden in the audience, he uses a remote control to have the piece start destroying itself through a shredder hidden in the frame.

Presumably, the stunt was meant to be an ironic commentary on the intersection of commerce and art.

But the real irony was that Banksy’s trick didn’t diminish the value of the piece. It only made it more famous and more valuable.

The painting took on a new name – “Love Is in the Bin” – and is now slated to go up for sale again at Sotheby’s London on October 14.

The estimated sale price is somewhere between $5 million and $8 million.

So the painting’s value is up five- or six-fold over the last three years alone.

Demand continues to increase for “blue-chip” works that stand out, especially from the top 100 artists – with names like Warhol, Basquiat, and Picasso.

In fact, the ultra-wealthy are flocking to high-end art as a unique way to protect and grow their wealth outside of more traditional assets like stocks or bonds.

It’s the continuation of a trend that has been raging for decades now, and it’s only getting hotter because of today’s ongoing historic wave of money-printing. 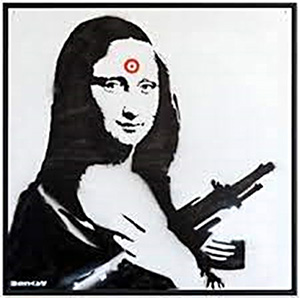 In just a minute, I’ll give you a way around that – one that has already handed other regular investors a big annualized profit from a different Banksy painting called “Mona Lisa” (pictured above).

Why Artwork Is Yet Another Hot “Trophy Asset”

According to Sotheby’s Institute of Art, “In the 1960s, the idea of ‘art as investment’ took hold and prospered into the $64 billion art market of today.”

That number represents the total value of high-end art changing hands on an annual basis. About half of those transactions happen publicly through auctions.

Meanwhile, if you look at the total value of all the high-end art in the world – essentially, the market cap of the art market – the number swells to roughly $1.7 trillion.

And ultra-wealthy investors are allocating an average of 5% of their money to the category already.

According to the Knight Frank Global Wealth Report, 37% of individuals worth at least $30 million actively collect or own fine art.

Meanwhile, the CEO of BlackRock, the world’s largest asset manager, says contem­porary art is one of the greatest stores of international wealth right now.

And for good reason…

High-end art isn’t just a separate asset class from more traditional investment categories like stocks, bonds, and real estate… it is superior in some ways.

Outperformance: Since 1995, post-war and contemporary art – as measured by Masterworks’ proprietary index – has outperformed the S&P 500 almost three times over.

Low correlations: The value of art has had almost no correlation to other asset classes over the last four decades. That means its performance doesn’t mirror the performance of other types of investments, making it a good diversification tool.

Scarcity: When it comes to fine art, the total supply is extremely limited. Especially if you start talking about a particular artist’s body of work. And as more of these paintings find their way into the permanent collections of museums and other public entities, the supply continues to decline.

Tangibility, mobility, and international portability: A painting is a real, tangible asset like a piece of prime real estate. However, it is also easily moved and can be sold anywhere in the world in any currency. In fact, roughly 64% of fine art assets are outside of the United States right now.

Add it all up, and you can see why art is such a hot commodity for ultra-wealthy investors… especially in today’s world of unprecedented money-printing and ultra-low interest rates.

And now, after centuries of remaining exclusively for the filthy rich, you can finally get access to the very same artwork and all the related investment benefits…

The Simple Way to Buy a Banksy for $10 or Less

I’ve talked about fractionalization in other Daily articles.

With fractional investment, the owner of an asset can list that asset on a platform… and offer shares (or fractions of the asset’s worth) to investors.

This is now happening with everything from supercars to luxury real estate.

So, it’s only natural that fractionalization is taking the art world by storm, too.

The first to do it was the Masterworks platform. Scott Lynn launched it to make blue-chip artwork investable for everyone.

The platform allows you to get fractional ownership in some of the world’s most desirable paintings for as little as $20.

Better yet, it isn’t just a buy-and-hold arrangement. You can also buy and sell your fractional positions to other investors through the platform’s secondary market (without paying any commissions).

As Scott told us, “The goal is to bring investment-grade paintings to the platform that drives superior returns.”

And it has already been doing that.

The Banksy “Mona Lisa” painting, mentioned at the beginning of this report is a terrific example.

It was the third offering on the Masterworks platform… and was purchased and then resold in just over one year… with a final annualized return to investors of 32%.

That was twice the S&P 500’s gain over the same timeframe.

Obviously, there is no guarantee that type of result will repeat in the future.

But it certainly demonstrates the potential of investing in high-quality paintings.

And based on the hype around the upcoming sale of Banksy’s “Love Is in the Bin,” demand for “blue-chip” contemporary art is still accelerating.

P.S. High-quality artwork is a great way to diversify your portfolio. But the ultra-wealthy make most of their biggest gains in another market that has traditionally been “off limits” to regular investors… until now.

Pre-IPOs can offer early investors crypto-like gains… but the last time Teeka presented one of these opportunities to his subscribers, the deal filled up in only 12 hours…

That’s why this time, Teeka has cleared his schedule to bring you the details on a new pre-IPO opportunity as urgently as possible. And it’s the kind of investment that could bring you 30–50 years’ worth of market gains… virtually overnight.

Here’s why this event is so special…

For the first time ever, you have the chance to be in on a pre-IPO deal with a billionaire… before its potential-listings on the New York Stock Exchange.

No matter your net worth, no matter your background, you can invest alongside this billionaire before this deal goes public.

You don’t want to miss out on this time-sensitive opportunity, so make sure to reserve your spot for Teeka’s free online event Wednesday, October 6, at 8 p.m. ET.

Space in this deal is limited. So you want to act now. Click here to learn more.