On New Year’s Day, more than 77,000 people lined up outside shops all across Illinois. A day later, another 56,000 people showed up.

It was a mad house.

Demand was so great, store owners ran out of product. They had to call their “manufacturers” to ship new product on the spot.

Yet this wasn’t for the launch of a new iPhone or a celebrity concert.

The funny thing is, this product isn’t even made in a factory. It’s an agricultural one that could become more valuable than the entire tobacco and alcohol markets, combined.

And right now, everybody on Wall Street hates it.

But if you’re serious about creating massive wealth for yourself… you must pay attention to it.

On January 1, Illinois residents could legally buy marijuana for the first time.

Some customers drove nearly 200 miles to find stores with product in stock. At one store, anyone arriving after 9 a.m. was out of luck. There simply wasn’t enough available.

That’s more than double the number of people who attended Super Bowl LIV (54).

And as impressive as that buying frenzy was, we haven’t seen anything yet…

I want to make something very clear to you: No matter your personal feelings on cannabis, I want you to understand we’re on the verge of the biggest wealth explosion since the dawn of the computer era.

Cannabis – and the millions of products that’ll flow from it – will lead to a Golden Age of opportunity that can change your life forever.

I’m talking about the chance to make the kind of money that could change the direction of the lives of you, your kids, and even your grandkids…

An Explosion of Wealth

In the first month of this year, people spent nearly $40 million on marijuana products in Illinois. Remember, this market opened its doors on January 1. So at this rate, first-year sales could hit $480 million.

And if Illinois follows Colorado’s experience, it should expect to quintuple sales by 2023, according to analysts from Cantor Fitzgerald.

If this were a new product launch going from zero to $2 billion in five years, it’d be the hottest stock on the market since Tesla.

If you’re one of my longtime readers, you know I’m following a much bigger trend: legal cannabis.

Legal cannabis (known as hemp) and one of its derivatives – cannabidiol (CBD) – will be far bigger than recreational marijuana.

Unlike marijuana, hemp and CBD are legal at the federal level. They have thousands more uses than marijuana – from industrial products and pharmaceuticals… to cosmetics and clothing… to foods and beverages.

While the recreational marijuana market is expected to grow to $18 billion by 2022… Brightfield Group expects legal cannabis to be worth over $22 billion by then. That’s 27 times bigger than it is today.

That’s why I’ve been pounding the table on federally legal cannabis (hemp). It’s a much bigger pie than recreational cannabis (marijuana).

So why am I pointing out the boom in weed sales in Illinois?

I want you to think about this…

Investor sentiment in the cannabis space remains in the gutter, even as we’re seeing buying frenzies and skyrocketing demand. That’s why I am talking about Illinois.

Illinois is showing us the appetite for marijuana is huge. But here’s the thing: There will be 22% more demand for hemp and CBD by 2022.

As I mentioned above, hemp and CBD are federally legal. So you can transport these products across state lines. The U.S. banking system is open to companies in their space. And most importantly, they can legally go into literally millions of products.

Plus, the usage of cannabis and cannabis-based products is exploding higher.

Cannabis market research firm BDS Analytics says global sales were up 48% in 2019. This beat its original forecast by 33%… and doubled the growth Grand View Research expected for 2019.

This is where I want you to pay extra attention – because if you do, you could change your life forever…

Cannabis stocks are trading as if the whole industry is about to be shut down. But the exact opposite is happening. Cannabis sales are at all-time record highs. Yet none of that demand is being reflected in today’s cannabis company stock prices…

A Perfect Recipe For Riches

The chart below shows the Horizons Marijuana Life Sciences Index ETF (HMLSF) compared to the S&P 500. The ETF tracks a basket of the top companies in the space. 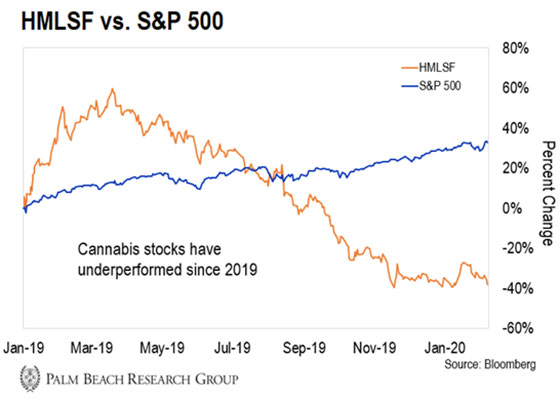 As you can see, cannabis stocks underwhelmed investors last year. Since the beginning of 2019, HMLSF is down 38%, while the S&P 500 is up 33% over the same stretch.

So cannabis demand broke out to an all-time high, yet cannabis stocks crashed. And I call this type of disconnect the “fear-fantasy” cycle.

In early-stage megatrends like legal cannabis, the market is full of cycles of fear and fantasy. When that happens, each new flight of fantasy takes prices to new highs… and each bout of fear ends in higher lows.

Last year, the overall cannabis market got hit hard with a boatload of negative headlines. Mainstream investors panicked and sold their positions… which crushed prices.

That’s the fear part of the cycle.

But as usual, the mainstream ignored what was going on under the hood. The fundamentals – things like sales, market share, and even profits – were telling a completely different story.

The media failed to report on the speed at which the industry is growing, and instead, focused on fearmongering headlines centered on the risks of vaping.

Just like when investor sentiment gets out of whack with reality on the upside, the same can happen on the downside… And that’s exactly what’s happening now.

When sentiment finally catches up to the reality of booming sales, we’ll see a new fantasy cycle that’ll take this sector to new highs. Companies trading near their bottoms could soar five, 10, or even 100 times or more when investor sentiment flips.

So it’s important to recognize a massive trend and where we are in it. The earlier you get into a trend, the more money you’ll make as the market flip-flops between fear and fantasy.

Right now, we’re at the bottom of the fear cycle – in the very early stages of a multidecade trend. This is the lowest-risk time to buy into a megatrend.

The action you want to take now is to get at least some small exposure to the cannabis sector. One easy way to do that is to take a position in HMLSF. It’ll give you exposure to the entire space.

Fair warning: Like any new early-stage industry, cannabis will be volatile for a long time. But so long as you position-size appropriately, who cares about volatility? That’s the admission fee for the opportunity to make 10x your money or more.

So keep your position size manageable. The beauty of investing in a young industry is you don’t have to risk much to make huge profits. But it’s a risk-reward scenario that won’t last forever.

Be sure to take advantage of it now.

P.S. For the past year, I’ve been working my network of insiders – looking for the best “sweetheart deals” in the cannabis space for 2020.

And that led me to my No. 1 wealth-building opportunity of the year. It’s the chance to get in on a pre-IPO deal with a billionaire before it lists on the Nasdaq. Plus, you can get in for just 50 cents per share.

In fact, this cannabis company got so much interest, it closed its funding round on January 31. But we’ve learned a handful of spots opened from investors unable to follow through on their original commitments.

So if you’re interested in taking advantage of this sweetheart deal, you have one last chance to act. But remember, once it hits the funding round, this deal closes for good.