Twenty years ago, I was at a Bonham’s car auction being held at the Larz Anderson Automobile Museum in Brookline, Massachusetts.

My goal was successfully bidding on a rare Bimota DB2 Italian motorcycle.

But before I even got into the event, I was stopped dead in my tracks by the sight of a McLaren F1… the fastest road-going car ever made up to that point.

And here one was – not up on the auction block but parked casually in the grass lot outside.

It was covered in a layer of fine dust, as it if had been in storage for an extended period of time, and the owner was writing in a notebook resting on the hood.

I had never come that close close to an F1 before…

And while I’ve since driven a $270,000 McLaren 650S (as pictured below), that auction was the first and last time I ever saw a McLaren F1 in the wild. 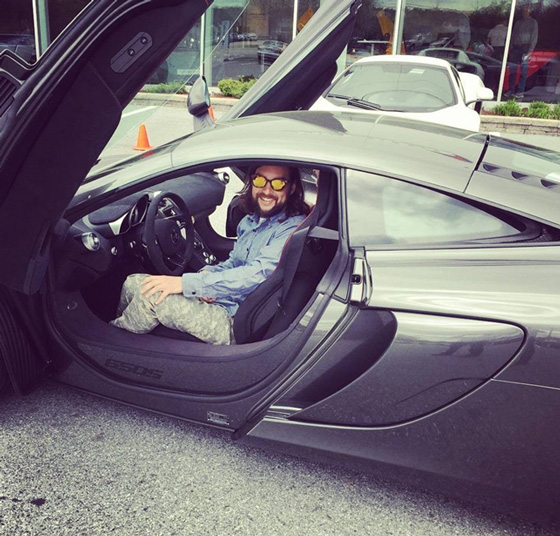 That means the car I saw has tacked on roughly one million dollars in value – more than its original purchase price – every single year in the ensuing two decades.

Given the numbers involved, that’s incredible… but it isn’t surprising.

And I see no reason for the gains to stop.

So let me tell you why this is a moneymaking trend. And how even if you’re not rich and famous… you can profit from it.

The Rich Are Scooping Up Trophy Assets

Trophy assets are valuable, tangible things like vintage cars, wine, real estate – and even certain cryptos – that’ll skyrocket in price due to the Federal Reserve’s unprecedented money-printing and the inflation that follows.

And millionaires and celebrities have been enjoying and profiting from them for years.

Even in 2018 – when almost all asset classes lost money – the HAGI Top Index for rare classic cars was up 2.5%.

Classic cars have risen in value for the last 30 years. And during the 2008 financial crisis, the smart money flowed into this safe-haven investment.

That’s why they’re one of Daily editor Teeka Tiwari’s favorite assets. Like bitcoin, trophy assets give you an element of privacy and portability that can only be found in a handful of other assets.

For every reason, it pays to have some part of your wealth in alternative assets right now. They can help you stay ahead of the massive money-printing happening around the world.

They can move independently of other asset classes like stocks and bonds. They can provide levels of privacy and portability far beyond most traditional vehicles. And even a relatively small amount of money can end up producing outsized gains.

But not all cars are collectibles. Nobody’s investing in a 1990 Ford Tempo or a Toyota Corolla… there are too many of them.

So you have to look for cars that are rare and iconic.

I’ve personally done well with a couple of Alfa Romeo Spiders, a Land Rover Defender 90, and a Lotus Elise.

I bought this 2006 Lotus Elise (above)… drove it for a few years… then sold it for more than I paid.

Of course, you don’t even have to buy a whole car to participate in this trend. Nor do you need a lot of money to get started…

Just to highlight a few examples…

Back in March, a 1996 Kobe Bryant rookie card sold at a Goldin online auction for $1.795 million.

In April, a Rolex Daytona with a rare turquoise dial sold for $3.1 million at a Sotheby’s auction in Hong Kong. That was six times the initial estimate.

And in a very recent, very secretive Christie’s auction, a Frida Kahlo painting sold for $130 million.

So they’re switching from cash to collectibles as a way of maintaining and growing their wealth in a world of ever-declining purchasing power.

It makes sense for you to consider doing the same.

At PBRG, our goal is to help turn more people into millionaires than any other newsletter in the world. So we search far and wide ways to level the playing field for everyday folk.

We did it with cryptos… We did it with private equity… And fortunately, we’ve found a way for Main Street to invest in luxury items usually reserved for the ultra-wealthy.

For example, platforms like Rally allow just about anyone to purchase fractional ownership interests in Rolexes, Lamborghinis, and Warhol paintings for as little as $25.

These same platforms offer liquidity and transparency, too. And they give you broad exposure to the tremendous upside in trophy assets.

The only real downside is that you don’t get to personally enjoy the items. But at least you’ll profit from their appreciation. And if you hit on enough asymmetric bets, you might eventually have the chance to own one yourself someday.

So, if you’re looking for an easy way to protect the value of your wealth from rampant money-printing and inflation, investing in trophy assets like a supercar, a Rolex, or crypto is a great way to start.

P.S. Just like fine art and rare cars, Fed money-printing is driving up the value in crypto and blockchain…

He calls them “Tech Royalties,” and they’re returning massive gains of 5x, 10x, and more.

To learn more about how Tech Royalties can help you beat inflation… and produce massive returns along the way… click here.